All too often we read reviews of power supplies that are not cheap. Some good power supplies can run between $100 and $150, if not higher! Not everyone has enough money for a top end PSU, so we are taking a look at Ultras Value line-up to see if they would be a good choice when you are low on cash.


I couldn’t wait to see how well these power supplies stood up to a great challenge, my Intel machine. The D 820 CPU by itself can hog up to 95W of power, and add to that all the other components, it will be a fun test. I installed each power supply one after another, starting with the 500W. In order to stress the system, I first ran a loop of 3D Mark 06 for an hour. After that, I opened up two instances of Super Pi and ran a copy on each core. After a half hour, I closed one of the Super Pi instances, and started up HD Tach to do a full HDD scan in addition to RTHDRIBL to work on the video card. After a half hour of this going on, I shut the PC off and continued with the next PSU and repeated the tests. I recorded all of the voltage fluctuations with a BETA version of EVEREST.

The results are as follows: 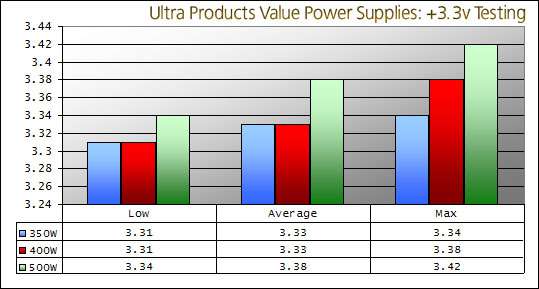 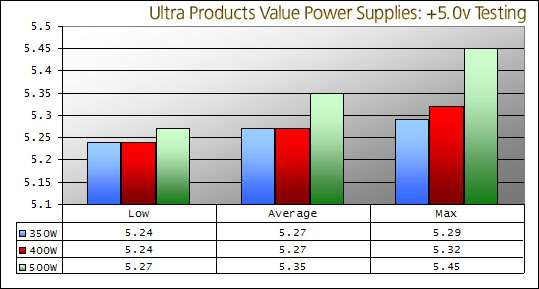 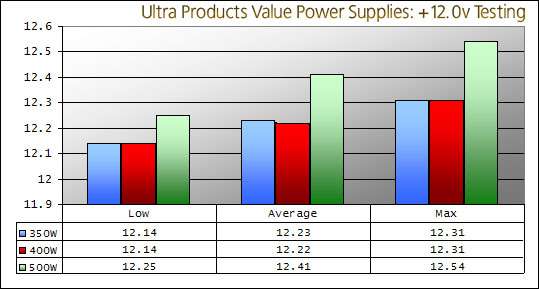 Surprisingly enough, the power supply that had the tightest voltages was the smallest. I had honestly figured that the Intel would eat the 350W alive. I was preparing for the worst… a blown PSU. I am very impressed that it held on like it did though! Of course, I don’t always recommend a 350W for any new computer; 400W more reasonable. On the other end of the scale, the 500W power supply was the one with the largest deltas which could be due to the larger amperage.

Overall though, all three power supplies proved very stable and handled the system well. If these we a more expensive model, they would still impress. If you do have extra cash for a larger, better power supply, you should always go for it. I would personally only rely on a value power supply on a smaller system, or one that’s not too system intensive all the time.