What I found was a nut, no not an acorn or a peanut but a 3mm internally threaded hexagonal fastener. I was aghast. In fact I was so aghast that after shooting off an email to J.C. at ULTRA I voiced my concerns at another forum where J.C. saw it. The amazing thing is rather than flaming me for my making this public J.C. did something about it, production was stopped that very day and a fix was sought. I was in close contact with J.C. throughout the entire process and eventually they decided that to prevent this from happening ever again that a thread locking compound will be applied to all current PSU’s rolling off the assembly line.

The upshot is that this took less than a week to resolve. Now this isn’t as scary as it may sound, the nut in question is a backing nut for the MOSFET’s that form the power section of the PSU, the MOSFET’s are screwed to the heat sinks inside the PSU body which are threaded and the nuts are there to "jam" the screws so that they’re not able to back out and allow an air gap to form between the MOSFET and the heat sink. The odds of this happening to someone else are astronomically high and given the fix implemented by ULTRA the improved PSU’s are most likely to never have this happen again, ever.

This is just to illustrate that ULTRA is a company committed to correcting customer issues as quickly as possible and it shows that they care what kind of experience that their customers have which to me is simply outstanding. 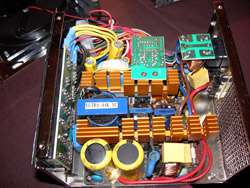 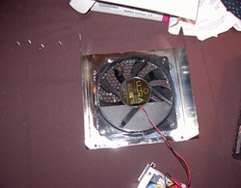 Since I’ve brought up the fact that I split open the X-2 I guess I should touch on it’s internal layout. The PSU is cooled by a proprietary 120mm fan that has one corner notched to act as an index for the airflow baffle molded into the fan. The purpose of the baffle is to cause the air to flow from the fan towards the front of that PSU (where the cable interface is) and allow the air to flow across the heat sinks rather than just blowing straight down on them.

Further inspection reveals that pretty high quality components are used throughout the PSU, the sinks are of a fairly decent size, the capacitors are from Koshin, which is a Japanese supplier. N.A.D. uses Koshin caps in the output section of their amplifiers as filters so that tells me that the quality is pretty good since N.A.D. has a reputation to uphold as a premier Hi-Fi builder and anything that they use in the signal chain can make or break their sound Q.

I’ve heard people talking about the size of the heat sinks inside this particular PSU as being sub standard when in reality, compared to the sinks in my Antec True Blue 480W the X-2 heat sinks are a slight bit bigger. 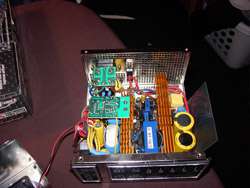 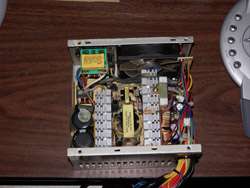 The specs for the PSU are listed on the label: 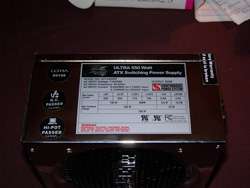 Installation was pretty much an easy affair, you choose what cables you need based on your hardware and connect accordingly. I needed 2-SATA connections so I hooked them up, I needed the ATX and ATX-12V connections so those were inserted, then a pair of molexes for my 5.25" drives were chosen along with the 7" single molex to power my rheobus. I also hooked up a molex with a floppy for my front fans and floppy drive and to power the auxiliary input on my 6800.

Even with all that there are still half a box of unused cables, I simply thank the guys at ULTRA that I am not scrambling to stuff all those un-used cables somewhere in my cramped Lian Li PC6070 case, every cable in the box with the X-2 can populate the X-2 at once! If the cables were permanently affixed to the PSU you’d be trying to hide a rats nest of un-used cables out of sight. This is what makes modular designs so appealing. Also my hat’s off to ULTRA on the quality of the cables and connectors they’re using, they fit very snuggly and positively into the interface headers with no slop at all. 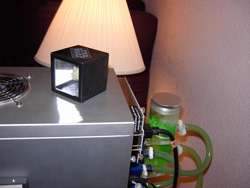 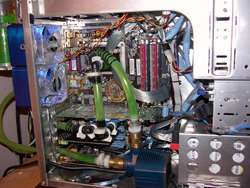 Size on the other hand may be a bit of an issue. In my case (no pun intended) I had cut in a 120mm blowhole into the roof of my PC6070 since my cooling system is highly atypical and I had no exhaust fans aside from the PSU I needed the additional airflow and since I didn’t want to lose use of all my 5.25" bays I cut the blowhole with the bias toward the rear of the case. With the design of the X-2 the PSU is just a bit longer front to back and when you tack on the modular plugs you end up with closer to an inch difference at points so I ended up with my PSU hanging out of my case by 1/2" or so. I can’t fault the X-2 for this, I’m the one that made my case into what is essentially a legacy setup so any blame or fault is entirely on my shoulders.