Todays high-end computers can no longer run on 400W PSU’s, it’s a fact. There are plenty of high-end PSU’s out there, but many aren’t that appealing to the eye. If you are looking for a PSU with looks and power, check out our review of the 600W X-Finity. 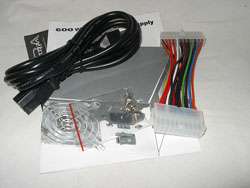 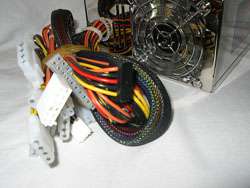 There’s no shortage of 4-Pin Molex connections especially. Only the Motherboard connection is sleeved, so if you are looking for a better look, you may want to grab a sleeving kit. It would be cool if they combined the best of both worlds, and made an X-Finity version that has Modular Cables, like the X-Connect.

The idle tests were performed, just as so. Boot up the computer, leave on for 30 minutes, then take the figures. The average was taken from normal use, music, internet, normal things. Lastly, the max load was performed by running SiSofts Sandra 2005 Burn-In test, while running a Prime95 calculation at the same time, for 30 minutes. 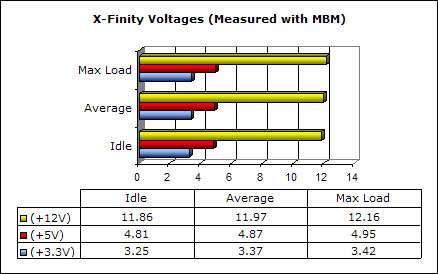 All figures were grabbed using Motherboard Monitor. It’s interesting to note that no voltages hit their bases. The largest fluctuation was the +12v at 12.16, which is 1.4% of an increase, which is great. All the figures were extremely stable, unlike the X-Connect which hit a 13.13 on the +12v rail.