Games like PUBG often present two scenarios for becoming enraged: suffering the fate of a cheap kill, or managing to get an amazing kill and then realizing no recorder was running. NVIDIA feels that pain, which is why it’s developed ShadowPlay Highlights. Let’s see how it works with PUBG, and review some humiliating deaths!

NVIDIA sponsored our time to deep-dive ShadowPlay Highlights so we could produce this article (+ video).

Like many, I have a sizable list of things that drive me nuts. Near the top? Experiencing something amazing in a game, only to realize that no recorder was running. It’s happened more than I’d like to admit, but given the number of solutions available nowadays, excuses for having it continue to happen are growing weaker.

One of those solutions is NVIDIA’s ShadowPlay, which the company released a number of years ago to great fanfare. I’m a self-proclaimed capture addict, and at the time ShadowPlay launched, we really needed solutions that weren’t so hard on the CPU.

Because ShadowPlay utilizes dedicated silicon right on the GPU to get its encode work done quickly and efficiently, performance degradation can’t really be noticed in the real-world, whereas it almost always was with older solutions. Over the years, ShadowPlay has grown, and birthed multiple features. One of those is the focus of this article: Highlights.

Announced early 2017, ShadowPlay Highlights allows users to have their most important gaming moments automatically captured. In the heat of battle, the last thing you want to deal with is hitting a hotkey to save some video – or worse, you don’t want to forget entirely. The latter sucks a lot.

As of the time of writing, two titles support Highlights: Lawbreakers, and the focus of this article, PlayerUnknown’s Battlegrounds. It’s hard to imagine that this game even needs an introduction. Few people knew of it a year ago, but today, it regularly has 3 million concurrent players at peak. The date or day of week doesn’t matter. At any given time of day, you’re going to see the game pegged to the top of the most-played list over at Steam.

Why Highlights Shines In PUBG

Highlights could be used well in most genres, but competitive games are where it can shine. A game like PUBG has an incredible number of players of all skill levels, and because the nature of each match varies, you never know what to expect – or what you’ll want to save. 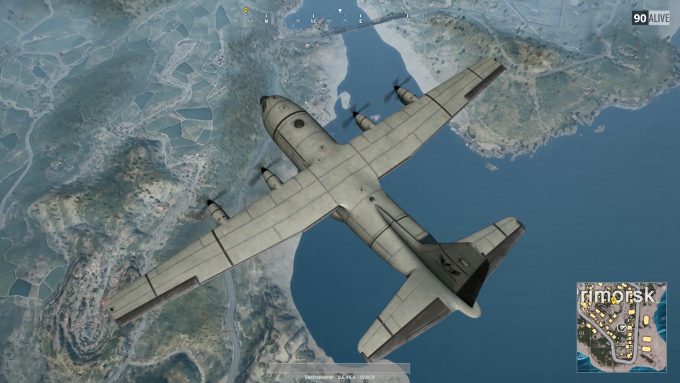 For the uninitiated, PUBG is an online survival game based on the battle royale concept of pitting everyone against each other and see who winds up the last person standing. Sounds simple, doesn’t it?

I never thought a game like PUBG was for me. It wasn’t until I began testing out ShadowPlay Highlights that I finally understood what it was that made this game so popular. I’m no stranger to deathmatch or other popular PvP modes, but this is different. The more I think about it, the more I believe that PUBG hasn’t just given me a unique experience, but one that can feel extremely exciting at times. To get my heart beating like PUBG regularly does in a game like Destiny 2, I’d need to be playing a deathmatch round and draw close to a streak of 20 kills. 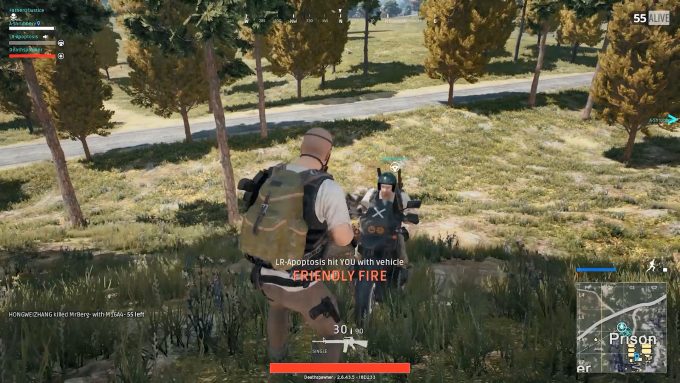 At least for me, PUBG isn’t a game I feel like I need to win. As long as I’m having fun, that’s all I really care about. At the 8m 40s mark of the video linked to earlier, you’ll see a series of deaths and kills, and hopefully gain an idea of why the game can be so satisfying even if you are not skilled at it.

One thing I would recommend is: be prepared to die a lot in the beginning. The concept of the game is simple enough, but there’s still a lot to figure out, and believe it or not, figuring out such things can be difficult when the entire world is out to find you, equipped with their rifles, shotties, snipers, handguns, their fists, and even a… frying pan. I dare you to die by a frying pan and not laugh about it! 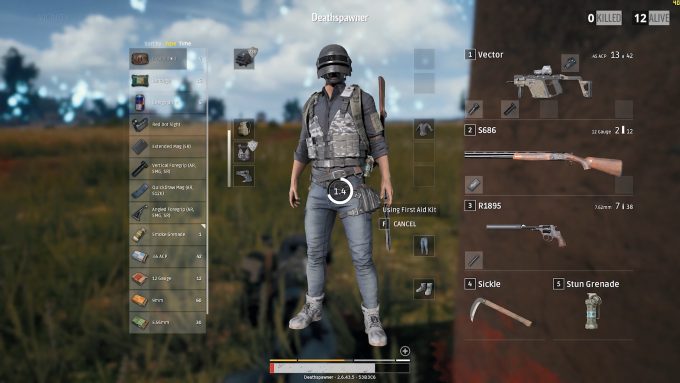 The moments that can be captured by Highlights in PUBG includes kills, double kills, multi-kills, knockouts, self-knockouts, and of course, deaths. Any one of these can be disabled, but I’d personally recommend that you don’t touch them, since nothing is committed to disk until you tell it to be. Storage just isn’t an issue here; Highlights will work within the cache limit you set. If you’re concerned about SSD wear-and-tear, you probably don’t need to be, but you can change the output drive to a mechanical one with likely no noticeable affects to performance. 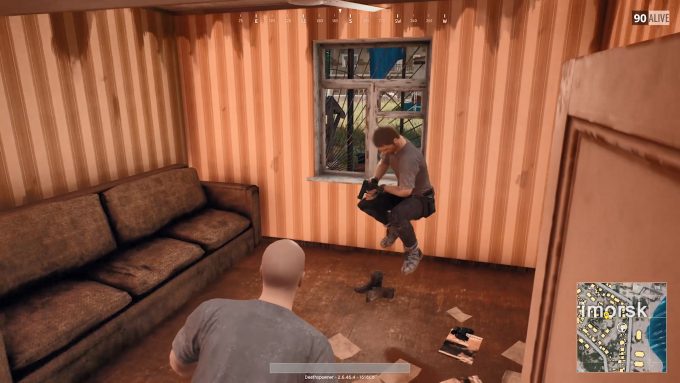 Capturing deaths might seem pointless, but as someone who’s been run over by his friend (I think accidentally), murdered by a ToS-breaking squad of 8 people, smacked with the aforementioned frying pan, and gifted someone their Winner Winner Chicken Dinner due to my inept skill, you just never know when a death is going to be worth sharing with friends. “Man, you shoulda saw it, and you coulda if I had Highlights running!”

Don’t be that guy.

Taking advantage of ShadowPlay Highlights requires a couple of things: an NVIDIA GeForce graphics card, and GeForce Experience. GFE is included with NVIDIA’s graphics drivers, so if you’re already an NVIDIA user, you probably have it installed. To take advantage of the software, you will need to register an account with NVIDIA. Social accounts work for sign-up to take out the hassle of registering for yet another service. NVIDIA regularly holds giveaways for those signed up, so you’re missing out if you’re not already registered.

One of the best features of GFE is that it can optimize both the image quality and performance of a billion (give or take) games, including, of course, PUBG. Because the game is as large-scale and intensive as it is, I’d recommend using a very modern GeForce. For 1080p, a GTX 1060 will suffice, GTX 1070 Ti for 1440p, and GTX 1080 Ti for 4K. I am holding out hope that as the game continues to be polished, it’ll include a built-in benchmark (because it’d be useful; the nature of the game makes it a real challenge to produce reliable numbers).

After optimizing PUBG in GFE, you could click the little snapshot icon at the top-right of the application to view the game’s Highlights. Again, I don’t recommend disabling any, because you may just regret it at some point. Again, videos captured will not use disk space until you tell it to.

You’ll also need to jump into GFE’s settings, which can be done by clicking the gear icon at the top of the application. Once you’ve verified that the in-game overlay is enabled, you can click Settings and begin customizing (this will have to be done in-game if you’ve disabled desktop capturing). Clicking the gear in the overlay will bring you to GFE’s settings, which includes three sections you’ll want to check out.

Under Connect, you can configure your social media accounts that you plan to share to. Doing this doesn’t automatically upload or stream video, so don’t fret. Next, Highlights can be checked to make sure that it’s enabled. Chances are good that the defaults will be suitable enough, but before exiting the overlay, you should hit up Video Capture, allowing you to configure your bitrate, resolution, frame rate, and Instant Replay duration. Instant Replay will allow you to capture more video than Highlights will, although if you simply want a manual option, that will never stop being available (via the default Alt + F9 shortcut).

Inside of PUBG itself, Highlights needs to be specifically enabled. I’m hoping that in time, the game will automatically notify NVIDIA users that the feature can be enabled, because at first, I didn’t realize it had to be enabled in-game. This might lead to some users wondering if something’s broke, when it’s a mere toggle that needs to be flicked.

Once a round is complete (or, you die), you’ll be greeted to a dialog that lets you preview your video, trim it, and upload it to your social network of choice. Fortunately, if you upload to a service that lets you hide it at first (aka: Unlisted at YouTube), you can do that here, too. You can also click the big “Save to Gallery”, which will save the resulting file to the location you previously configured.

I mentioned before that before jumping into PUBG, I didn’t expect it to grab me – despite its unbelievable popularity. I’ve never played a game like it, usually leaning towards standard PvP modes such as team deathmatch. The game didn’t even grab me after the first night I played, only because there was so much to learn. Once I began to get a grasp for things, I started having a ton of fun. It didn’t matter if I was solo or in a squad… no matter how the game’s played, each round is going to feel interesting. Well, unless you manage to die before anyone even sees you (which I’ve experienced a time or two).

ShadowPlay Highlights enhanced things further. When I played, I never cared about whether or not my potential cool plays would be captured, because Highlights had my back. There were some occasions when I goofed and didn’t have GeForce Experiencing running, so don’t make the same mistake. This is how I lost footage of the eight-man squad I mentioned earlier. 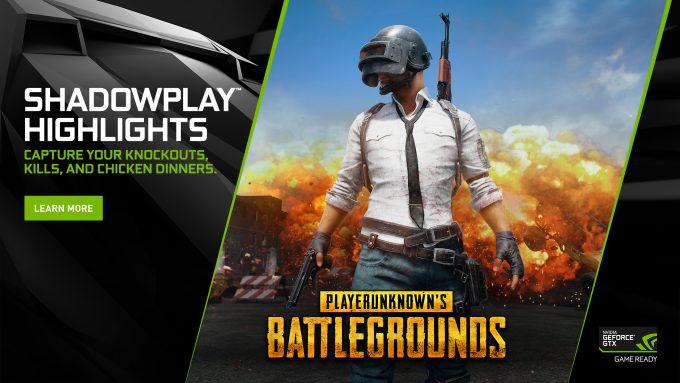 I started to love Highlights the more I used it, and I began to wish that it was far better supported than it is at the moment. Long before Destiny 2‘s PC launch, I hoped to see some tech included like NVIDIA Ansel and ShadowPlay Highlights – and so far, we have neither of these things. I’ve already lost a good deal of possible footage and screenshots in Destiny 2. Two or even a few games isn’t enough – I’d love to see Highlights supported in a lot more.

Any company producing competitive games should consider implementing Highlights. I am not an Overwatch player, but I’m not oblivious to how useful the feature could be there. The same goes for any game of a similar genre, so at this point, we must wait to see what comes next. If you dig Highlights, though, it sure wouldn’t hurt to raise that interest with the developer and / or publisher of the title that’s in your sights.

At this point, I have no clue what the next supported ShadowPlay Highlights title will be, but I’m hoping it won’t take too long to find that out. I would not be surprised to see an Ubisoft title be granted the feature in the near year, as NVIDIA has had a very strong relationship with the studio for many years.

If you have questions that were not tackled in this article, please hit up the comments below and ask away!