As NAS is becoming ever more popular, many are looking for the best bang for the buck. That’s where Vantecs $60 unit comes into play. Although it offers IDE support only, it proves to be quite a solid offering.

With hard drive prices dropping more and more each and every day and the capacity only going up, the GB per dollar ratio invites an ever-increasing number of people into the world of external storage. With the prices dropping, the last few years have seen a shift in portable storage.

Before, if you wanted to transfer large amount of data from one PC to another, the sneaker-net approach was used by burning as many files as you could fit on a CD-R and physically taking that disk to the other PC. While the premise is the same, with an external hard drive, you can now carry hundreds of gigabytes of information whereas to carry the same amount of data could require the use of dozens of blank disks. Connecting either by USB or FireWire, external hard drives offer not only mobility, but also quick transfer speeds.

Outside of portability, another use of an external hard drive is backing up data. With one PC being used, the user can simply plug the hard drive into an available FireWire or USB port and drag and drop any and all data that needs to be backed up. This is a perfect approach for single users but what if your apart of a network and you need the storage space available for every user?

While the argument can be made that a user can easily share the drive even if itâ€™s connected by USB, this ultimately requires the host PC to be turned on in order for others to access the drive. If the host PC is a notebook or a personal computer, one might be turned off by a USB drive.

If your needs are as such, a network attached storage device is right up your alley. NAS boxes are simply external hard drives that connect to a network through CAT5 instead of USB or FireWire.

One such device that can be used either as an external USB hard drive, or as a network attached storage device is the Vantec NexStar LX. With both a 10/100 Ethernet jack and a USB port, the versatility of the NexStar LX is immediately noticed. Armed with both, how does the NexStar LX perform and even though itâ€™s priced well under $100 (US), is it worth your money? Letâ€™s find out.

Vantec has decided to ship the NexStar LX in a colorful and informative box. With pictures of the device and plenty of information about the enclosure and what it can be used for, the packaging is well done and not too over the top. 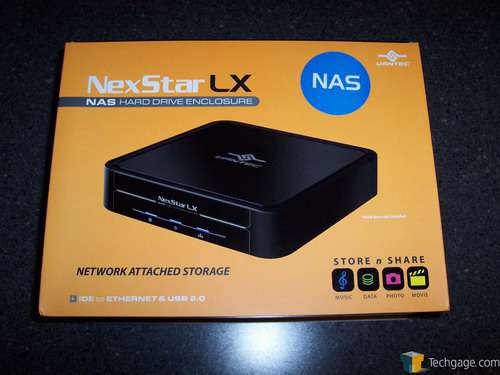 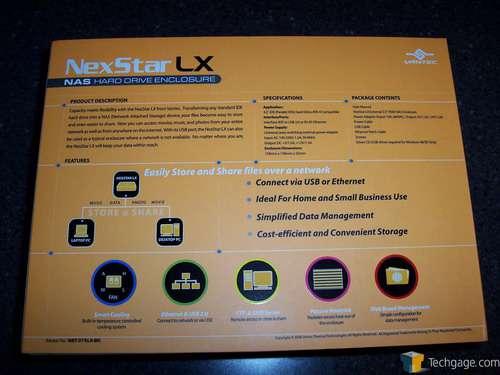 Once out of the orange sleeve, the NexStar LX is securely packed away inâ€¦. another box! This box, lacking the flair of the outer cover, simply opens at the front and the top is folded back. 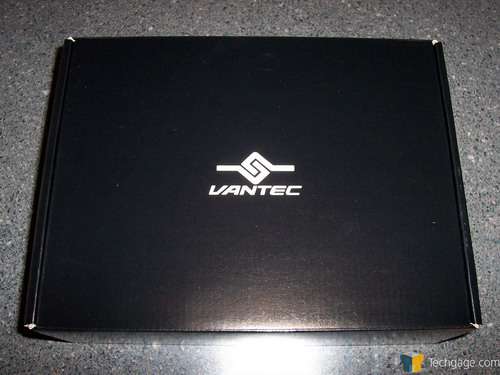 Once inside, each component has itâ€™s own compartment to eliminate any damage that could be done by the parts knocking around in the box during shipment. 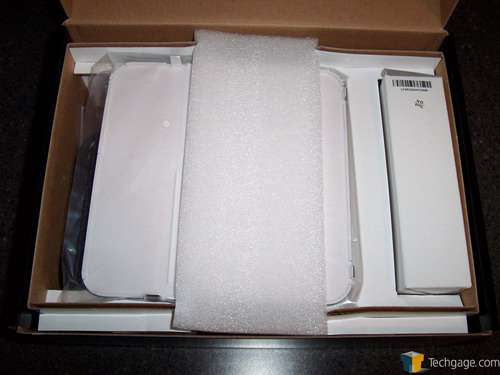 Vantec has provided all of the required accessories to get the NexStar LX up and going as quickly as possible (hard drive not included). With a manual, USB driver disk for computers still running Windows 98, USB cable, power cord and power brick, an Ethernet cable, hard drive mounting screws and thermal probe tape, the NexStar is good to go right out of the box. 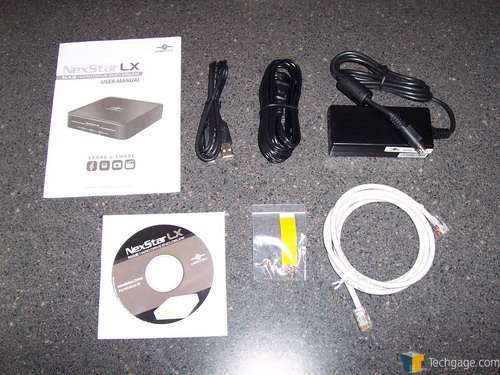 Moving onto the unit itself, the NexStar LX is square in shape and roughly the size of a CD or DVD drive. With the Vantec logo on the top, the LX is simple and to the point. The glossy black finish gives the LX an elegant appearance. If black isnâ€™t your color, the NexStar LX is also available in Apple white. 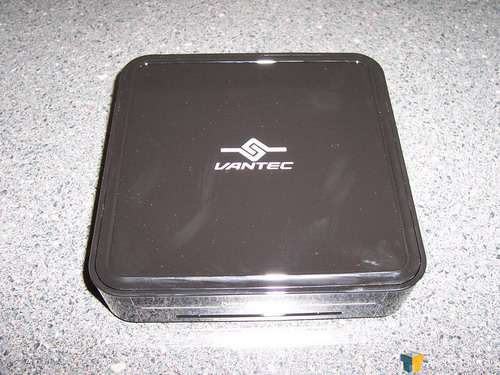 On the front of the NexStar, there is a small row of clear plastic with LEDs on the inside. These indicate hard drive activity, power and network activity. 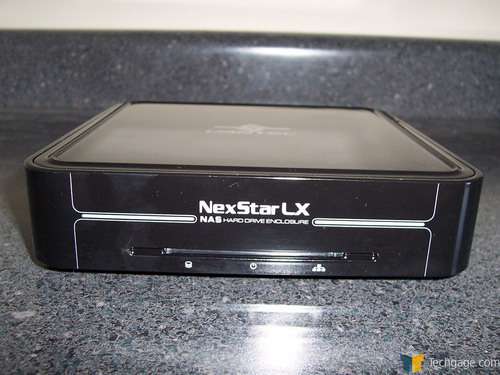 Moving around to the back of the device, we see a row of switches, ports and connections. The corners of the NexStar are rounded and the back two corners are perforated to allow the small fan to breath easier. Moving from left to right, the LX has an on/off switch, power port, fan speed controller using two dip switches, a 10/100 base network lack and a USB 2.0 jack that allows the NexStar LX to be used strictly as an external hard drive.

Located just above the row of connectors is an opening for the small cooling fan to pull in cooler air and use it to keep the internal space cool. The fan speed can be controlled by flipping a pair of dip switches. 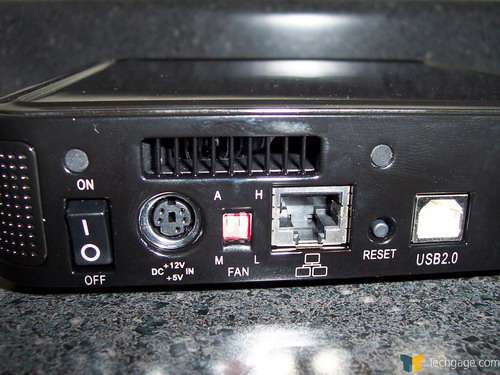 On the bottom of the picture, as well as the top, towards the right side of the NexStar, there is a small opening. This opening allows a small screw driver to be slid into the enclosure to remove the top of the LX, granting access to the inside of the device. 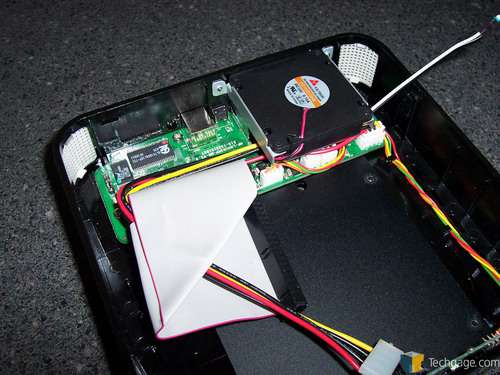 With that said, the NexStar LX is a great place to put an extra IDE drive that might be lying around not being used. In our case, we happened to have a Western Digital 120GB hard drive not being used. 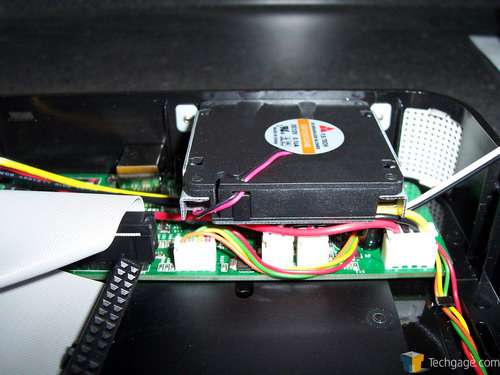 With everything installed (and by everything, I mean the hard drive), its now time to put the cover back on the NexStar LX and get to testing. One thing that users will need to pay attention to is the IDE ribbon. It must be folded correctly in order for the rather flimsy feeling top to close correctly. While this isnâ€™t anything major, it is something that needs to be done if your going to put the top back on the device. 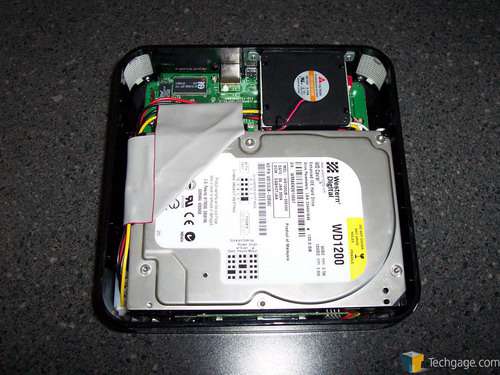 Lets move onto installation and a look at the software.