VidaBox produces some of the finest HTPCs on the market, but until recently, they’ve bundled keyboards from other companies. We are taking a look at their first own offering, a wireless solution with built-in trackball. It’s compact, sturdy and surprisingly impressive.


There is a function key on the bottom left which I keep hitting when I intend to hit the Ctrl button next to it. It does not appear to affect the F1 through F12 keys at the top, and playing with it a little yields no obvious use. It does not affect the numpad or any other keys. I’m presuming it comes into play somehow, but without a manual it’s a mystery.

One thing missing – a scroll wheel. Now perhaps we’re all just spoiled, but some sort of scrolling option would have been a nice addition.

Problems I see with this keyboard specifically with the keys: 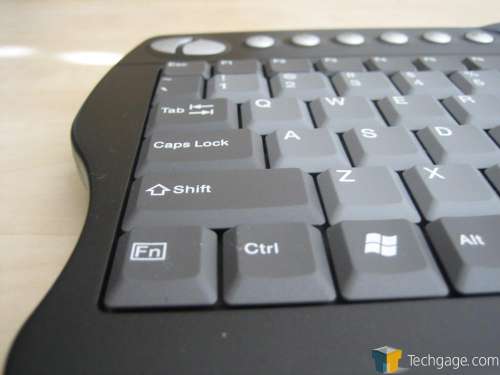 Wow that kinda surprised me – particularly the part where I spelled everything correctly without looking at the screen!

Sadly I can’t take it to the full 30′ or I’d be outside my home, I was sitting on the windowsill at 25′ as it is, but it would appear the instruction insert is either out of date or simply incorrect. The instruction page is meant for this keyboard, but perhaps either not translated well, or no one has read it in a long time. Ignore it and go with the online specs.

Now I toyed with it a bit, and the only issue I did find and which is noted on the instruction sheet, occurred when I crossed the streams. (Great plan Ray…) I currently have a cordless mouse talking to its receiver. If the keyboard and its receiver do not cross paths with the mouse and its receiver, all is fine. When I put the keyboard receiver on the other side of the mouse/receiver line, I found some interruption. But then again, crossing the streams is never a good idea.

Quite frankly if you’re sitting 30′ away from your TV, you either have very good eyesight or a 100″ screen. The range of this keyboard definitely exceeds most people’s requirements.

A note about the battery life:

Since I’m obviously not going to stare at this thing for two months, I’ll take their word on its idle battery life and follow up on the forum post related to this review.

A note about the protective pouch sleeve:

At first I was like – what the heck? – it comes with a cover? I thought the days of keyboard covers had come and gone, but then it dawned on me again, this isn’t meant as a keyboard for daily use, you’re going to want it tucked in an end table or your media cabinet and in those cases, a protective cover makes a great deal of sense.

Overall if you’ve already invested thousands for your home theatre PC setup and all its peripherals, then the $62.99 price tag for this keyboard is not significant. Its range and reliability make up for the small flaws. I’m totally surprised at this little keyboard, to be honest. And I think you’ll be surprised at the 9/10 I’m giving it. I think this is the highest mark I’ve given anything, ever!

Author’s Note: We just received this from VidaBox, "To thank your readers for their time in reading your review, we’ve authorized a special discount code – ‘techgage’ (without the quotes) – which is good for 10% off the VidaBox keyboard w. optical trackball!" ~ Thank you so much!