Media cards are becoming commonplace, we see them more and more every day. They’re found in cameras, MP3 players and now even in some cell phones, car stereos and gaming appliances. If you’ve got more than one format you’re stuck with a tough choice, either use the method of transfering data provided with each device or buy a multi-card reader.

Today I’m taking a quick look at the Vizo Mirrorbox 32 in 1 media card reader. Hearing that you kind of expect the thing to have more slots than you can shake a stick at but oddly enough it has four. One slot does serve as two slots by way of a stepped opening but there are just four physical openings on the face of the Mirrorbox.

Let’s see what Vizo has to say about the Mirrorbox:

Sleek, compact and portable. VIZO MirrorBOX 32-in-1 Card Reader is extremely versatile for your personal or business use. Support 32 of the most popular memory cards . USB powered device with low power consumption and no external power required. Plus, it is small enough to fit in your pocket. It is great convenient of you to bring it to anywhere for storing, downloading and sharing data between your computer, memory cards or external devices. 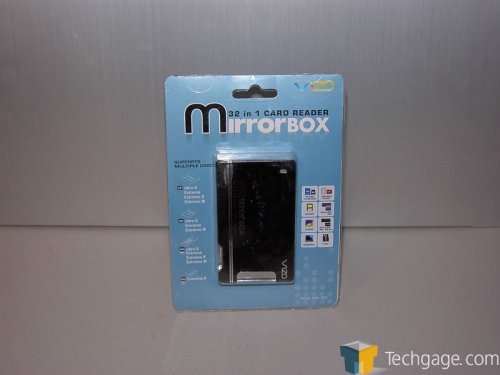 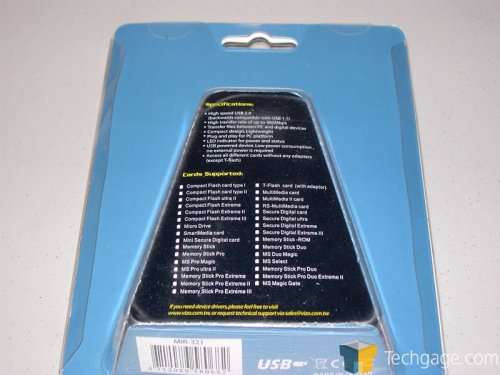 The package is a basic blister pack that doesn’t require a chainsaw to get into. On the back you’ll find a listing of the media types supported. Sadly the Mirrorbox lacks support for xD memory. Considering that this is a 32-1 card reader you’d think that xD would be included but I guess that since it’s still fairly new and the only MFG using it is Olympus it didn’t rank inclusion. 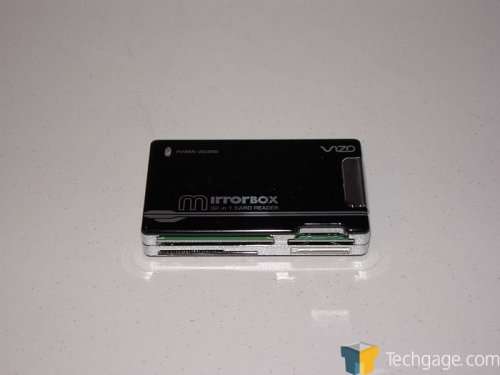 Here’s a look at the front of the Mirrorbox, as you can see it’s pretty small and easily portable. In fact the casing is the same exact size (L x W) as a credit card. It’s not beyond the realm of possibility to say that you can easily toss it into your camera bag along with it’s USB cable and take it with you. Sounds pointless but there are times when having one point of access for more than one type of media can come in handy on the road, I’ve been there. 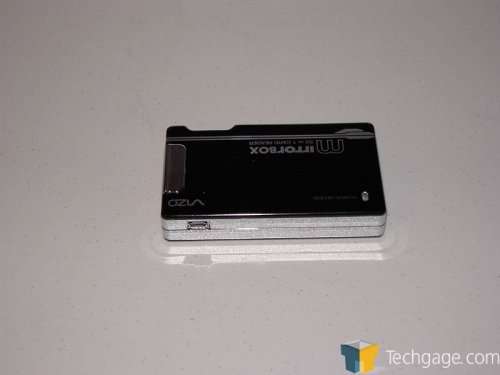 The rear of the Mirrorbox has the mini USB cable input, nothing much more to see there. 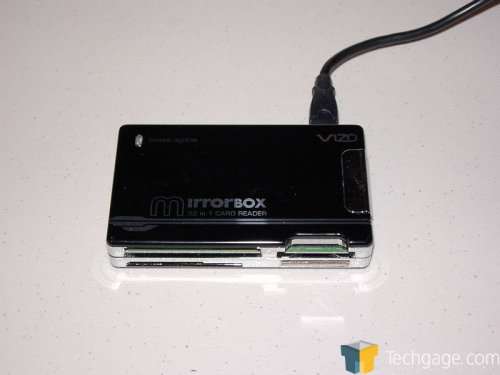 When the Mirrorbox is hooked up to the PC the power/access LED lights up green and when you access a card it flashes red. The finish on the Mirrorbox is top notch, in fact it’s so reflective that taking a picture of it straight on with a flash is pretty much a no-go and taking a pic at an angle ends up with the chrome nearly ending up blending in with the black.

I have a couple of screengrabs of how well it transfers SD media. I ran these tests with both the built in media reader on my PC and with the Mirrorbox and the numbers were identical so rather than wasting time posting four screenshots that all show the same data I’ll just post the ones from the Mirrorbox. 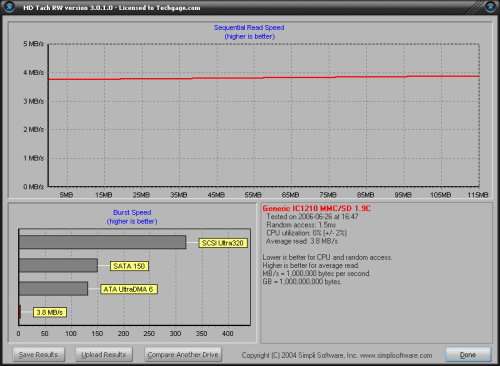 With HD Tach RW 3.0.1 we see that the transfer rate is pretty close to flat. No nasty surprises such as dips due to problems with the interface. 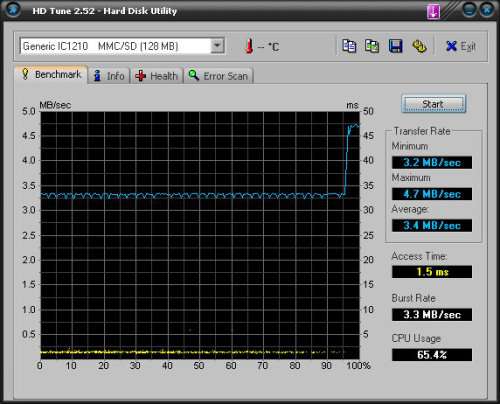 HD Tune 2.52 shows pretty much the same story although there’s a bit of a peak at the end. As this was there in both media readers I chalk it up to the media itself and not the readers.

All said the Vizo Mirrorbox is a handy little piece of equipment to have on hand if you’ve got more than one type of media to deal with. For those of you out there with a few cameras, MP3 players and whatnot you might consider getting one, that is, as long as you’re not using xD media. If you’ve got xD in the mix look elsewhere for a multi-card reader as the Mirrorbox won’t satisfy your needs.

With that said I’m awarding the Vizo Mirrorbox an 8/10 for it’s small size, ease of use and the ability to handle a drawer full of media cards.