Gone are the days of paying over a dollar for a gigabyte of space on a hard drive. With platter densities on the rise, more storage capacity than most many will ever use can now be purchased for, quite literally, under 25 cents per gig. This is in stark contrast to only a few years ago, but as access to our personal data at both home and at work grows, we need to be able to move this data from one place to another.

For many, the simplest solution is to purchase an external hard drive and attach it to their computer. Not only will this solution give you total mobility with your data but it also provides a simple, local and easy destination for you to dump your system backups on. Considering most external drives today ship with some form of backup software, there is very little room for excuses as to why you shouldn’t implement some form data recovery plan.

For me, I use a home NAS box to backup my music, pictures and documents on a nightly basis and if I need to transport that data anywhere at all, I have an external hard drive. My personal drive consists of a Vantec NexStar 3 enclosure with a Seagate 250 GB SATA hard drive and for the most part, it allows me to take my music with me on to work and fits nicely in my notebook bag. For those that have no need for a NAS box, an external hard drive provides the perfect device for backing up and storing irreplaceable personal data.

While we are all familiar with companies like Seagate, Western Digital and Maxtor that all provide their own external devices, there are other companies such as Buffalo, LaCie and Iomega who are all quite popular in their own right and might even use one of the other three’s drives in their own devices.

In the past, we have looked at Seagate’s FreeAgent Pro and Maxtor’s OneTouch and while Rory loved the Seagate, Matt found little to like about the OneTouch. What is going to seal the deal for everyday people like you and I is more often than not price and brand loyalty. With so many companies offering their own external solutions, most will go for the most capacity they can get in the price range that they are willing to pay. If there are many that are comparably priced, brand loyalty inevitably comes into play.

One such company that many haven’t heard of is VOX Products. As a relatively unheard of company, VOX has a stable of products that range from single drive, lower capacity hard drives to larger drive that top out at 750 GB. When we were contacted by VOX to see if we were interested in evaluating one of their external hard drives, we jumped at the opportunity. It’s nice to be able to inform you of companies that might otherwise get overlooked and every once in a while, a true gem is found.

On the bench today is the VOX 750 GB external hard drive. Using either the supremely popular USB 2.0 or the newer (and much faster) eSATA, the VOX V1 looks to compete with the larger companies’ offerings by offering the two most popular interfaces available today. While FireWire is faster than USB, its popularity isn’t as high so the exclusion on the V1 shouldn’t be a deal breaker for anyone but those that only need this connection interface.

Arriving in its retail packaging, the VOX V1 USB/eSATA external hard drive’s box is small and to the point. There are a few Windows endorsements and the sides are adorned with the device’s specifics. 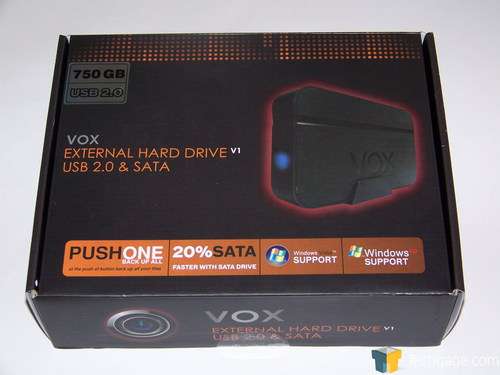 Once opened, we see that the V1 comes packaged securely wedged into two pieces of protective foam. Bundled with the V1 is a refreshingly thorough manual covering both the setup of the device in a Windows environment as well as how to use the included backup utility. Also included is a short USB cable, an eSATA cable, power brick, power supply, a vertical stand and a small disk that contains the backup software. 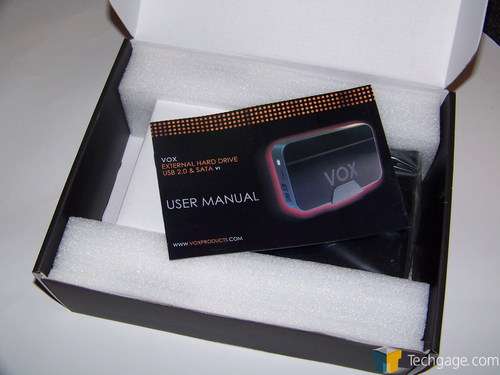 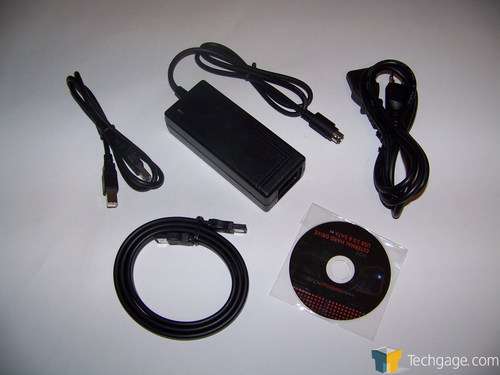 Designed to rest flat on a desk or vertically when placed in the provided stand, the V1 is an entirely black enclosure with the one visible exception being the grey, blue back lit, backup button on the front. With aluminum side panels and a soft plastic border, the style of the V1 won’t turn many heads but if the performance is in line with similar devices, the lackluster style might be overlooked. 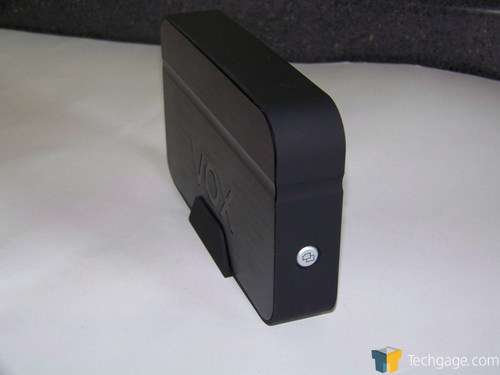 Pressed into the aluminum side panels in large block lettering are the name of the company VOX. On the underside of the V1 is a small keystone like piece of plastic that is intended to never be removed. However, when curiosity overtakes us all, underneath this piece is a warranty sticker informing us that if removed, the one year manufacturer’s warranty is void. This sticker runs the entire width of the V1, covering both the aluminum side panels so tampering with the device should be done only if you have no concern for warranty repair down the road. 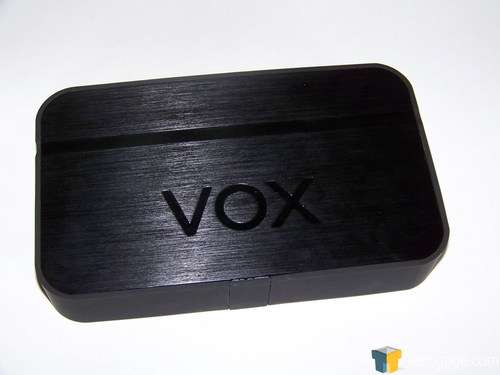 On the back of the V1 we find the various I/O ports as well the power connection and switch. Running from left to right, we see the power connector, power switch, eSATA port and the USB 2.0 port. There is also a sticker above the eSATA port that contains a bar code and what appears to be a serial number. Doing a bit of research, this information is used with redeeming your mail in rebate. In our search, we found the V1 at many different e-tailers but the mail in rebate came from Buy.com. 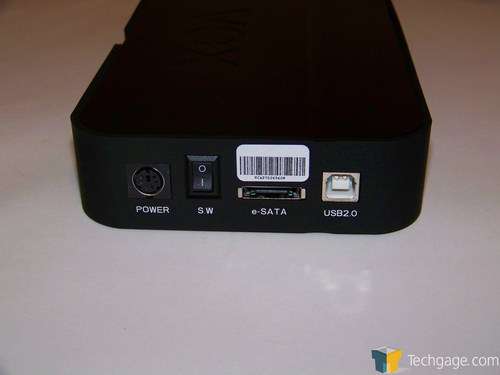 Moving to the interior of the V1, we want to first start by expressing that we do not endorse the blatant disregard for a manufacturer’s warranty. Nor do we recommend this for anyone worried about losing the warranty provided by VOX. That said, let’s break it down.
Popping the side panel off of the VOX was far easier than we would have liked to have seen. This was made even easier by the clear gap between the plastic that runs around the hard drive and the aluminum side panel as seen in the following picture. 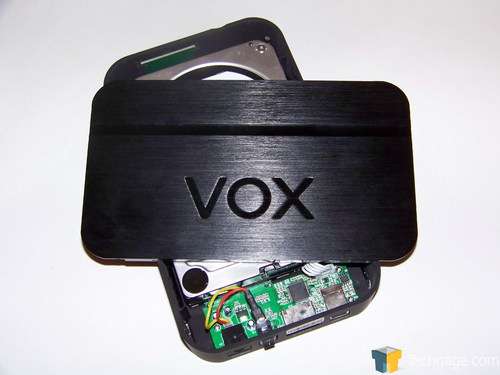 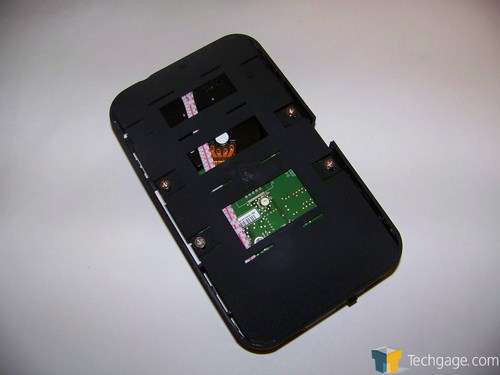 With the side panel off of the device, we can start to take a look at what makes this thing work. On the underside of the V1, there is a plastic frame with four mounting screws in place to hold the hard drive to the frame. There are also holes cut into the floor of the V1 to allow heat to escape from the hard drive’s PCB and into the side panel to get dissipated away by the outside air. 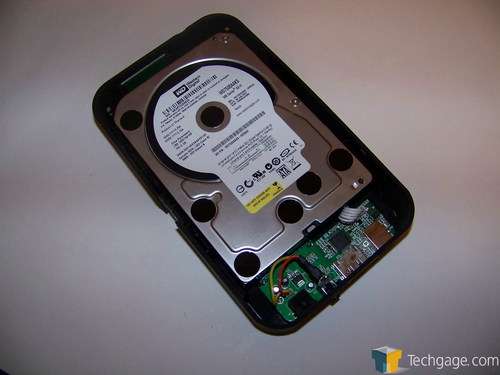 VOX has chosen to use a Western Digital 750 GB drive in the V1 and from looking around the web; this drive has been the darling of reviews. The drives model number is WD7500AAKS and alone on NewEgg, sells for just under $150. This drive is a high quality offering and is a welcome site inside VOX’s enclosure. Notice that there is little room between the drive and the side walls of the V1. The thin aluminum sides are all that move heat away from the inside of the V1 but being as thin as they are, and with the surface area that they have, should be able to keep the WD drive under critical temperatures. 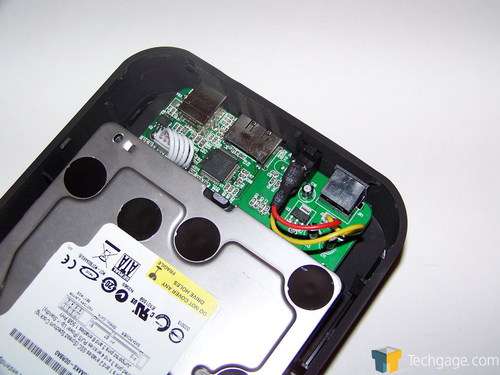 Controlling the V1 is an Initio controller chip providing USB connectivity to the device. There is also a white cable attached to the PCB that controls the front backup button as well as powers the blue LED behind it. 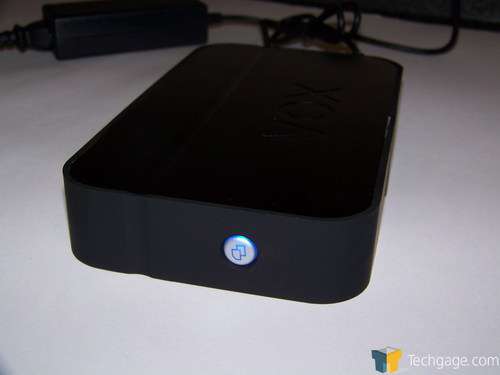 When powered on, the V1’s blue backup button glows a nice blue but turns a reddish orange with the drive is accessed. Pushing the button once brings up the IniBackup (version 1.17) software but if a backup job is not selected, this process will error out and force you to setup your own backup procedure.