Many artists and designers are looking for tools that make their lives and jobs just a little bit easier. Tablets are becoming an essential tool in digital artist’s toolset, a must-have for hobbyists and pros alike. With such tools in hand, we are given far greater flexibility for artistic ingenuity vs. the old mouse, opening a wide world of design possibilities.

Despite other tablets being available on the market, Wacom has carved a niche for themselves with dynamic tablets that are not only exceptionally easy to use, but also extremely stylish.

Today we are looking at the new professional pen tablet, the Intuos4. With a sleek new look and many new features, the Intuos4 tablets are indeed an attractive piece of work. But, how well does it function, especially in comparison to its well-established predecessor, the Intuos3? Allow me to give you a look at the Intuos4, and we can see if this ultra-modern tablet is the right one for you.

The packaging is mostly black, very sleek and modern. There is a large dust cover box over the first, which slides off, at which point you pull the tab and lift up. Inside, you pull back the flap panels and expose a cushion bag, which is where the Intuos4 is kept. Just under the tablet is a niche in the plastic holding shell where the pen sat. Lifting out the plastic shell, the other parts to the Intuos4 are underneath. Everything is packaged snuggly and securely, to assure the product arrives to your door in perfect condition. 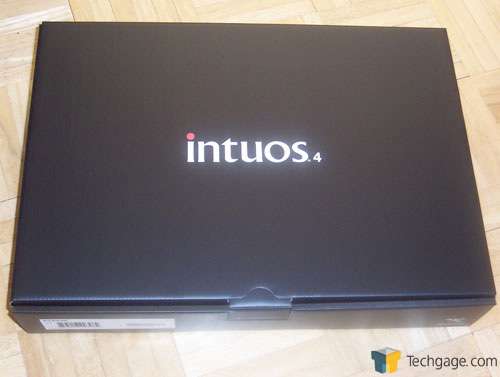 The Intuos4 that I am working with is the “Medium” size, which is 14.6″ by 10″. The actual workable area of the table is 8.8″ by 5.5″. First impressions as I open the box are extremely high. It looks great, very streamlined, thin and relatively light-weight. The mouse and pen look nearly the same as the Intuos3 versions, but more in-depth comparisons will be made later on. 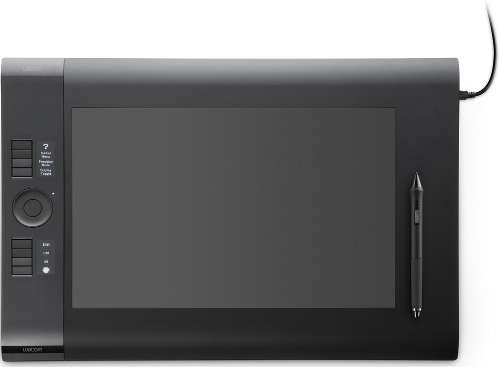 The most fascinating new feature of the Intuos4 to me is the LCD displays next to the eight express keys. They are fully programmable, so you can set any key to what ever shortcut you like, and the LCD screen will display what each express key is programmed to do when plugged in. This is real handy given that I would consistently forget what shortcuts I had programmed to the keys on my Intuos3. Another feature also made me joyously happy, and that was the new pen base, which stores all those tiny pen nibs. This ensures that you’ll never lose another pen nib again!

On the side of the tablet opposite the express keys and touch ring, are the USB ports. These are the mini-B port plug-ins. Only one port is visible at a time, due to a slider bar that allows you to use one of the ports while keeping the other port covered. The slider bar is located on the bottom of the tablet, and slides easily. Both ports are located towards the ends of the tablet side, opposite of each other. 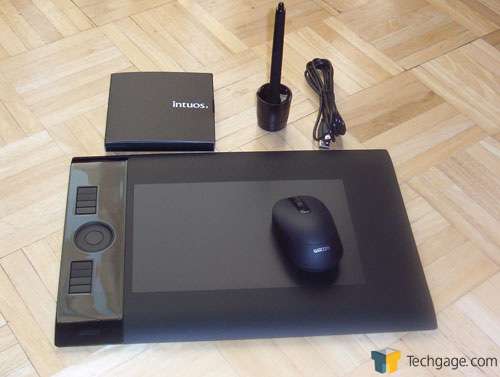 I am glad the tablet has two USB plug-in ports. Why is because from frequent use of the ports, as with many USB items I use on a regular basis, eventually ports get stripped out and the plug-in wiggles or falls out. I was worried that eventually the same thing could occur here, and to have the port ruined on the tablet would just make me cry.

Of course, when plugging in the cord, it sets into the tablet a bit, giving the plug base support, and it doesn’t wiggle all that much. I was iffy about it, but seeing it eases my thoughts. Having worked with the Intuos3 for so long, it will be a nice change to not have to wrap up a cord after every use. 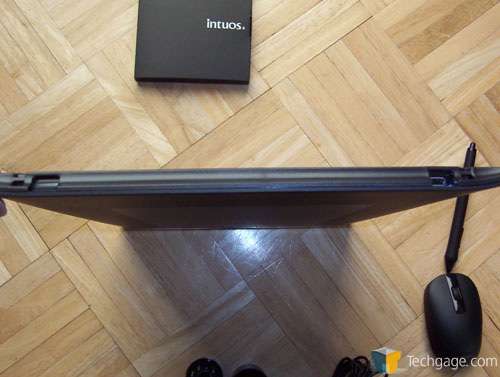 Installation of the software is of course straight-forward. Disc in, install drivers, follow directions and you should be good to go. However, if you own another Wacom tablet, such as the Intuos3, I’d suggest removing the drivers for that first. I had some issues with the computer not recognizing the Intuos4 tablet, even after driver installation. As soon as I removed my old drivers and installed the new ones, there was no problem. 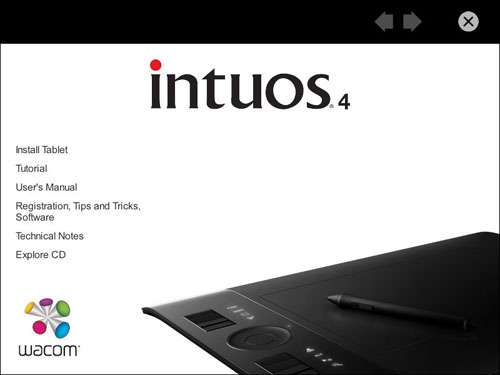 I went to Wacom’s site after installation and downloaded my software bundle. The company gives you two plugins to download, and also your choice of two designer programs to download. What is available for the software bundle can depend on your region, so it is best to check your regions website for details on this.