Now we come to the comparison of the Intuos3 to the Intuos4. There are many distinct differences that set these two tablets apart and you can see many of these differences with the supplied images.

First off is the new tablet pen. This pen is much lighter than the original, and thinner. I find that gripping and holding this pen is much closer to the feel of a real pen or pencil. It is a slight bit shorter too, and has a very streamlined look and feel. Of course I have small hands, so someone with larger hands may or may not like the smaller pen size.

The tablet comes with three little color rings, gray, red and white, which are for the pen. You can take the default black ring off from the tablet pen by screwing off the pen top, sliding off the black ring and replacing with a color of your choice. I placed the white ring on my pen, just to give a visual.

Another defining feature of the Intuos4 pen is the Generation 2 technology it boasts. As I had mentioned previously, this new tech the pen is capable of delivering 2048 levels of pressure, as compared to the Intuos3 which only has 1024 levels of pressure. It also has non-zero starting pressure, which means the tablet can recognize the pen at a mere one gram of pressure. The pen’s design is of course more in line with typical design instruments, feeling closer to that of a traditional pen. The new Intuos4 pen, however, is only compatible with the Intuos4 tablet series. 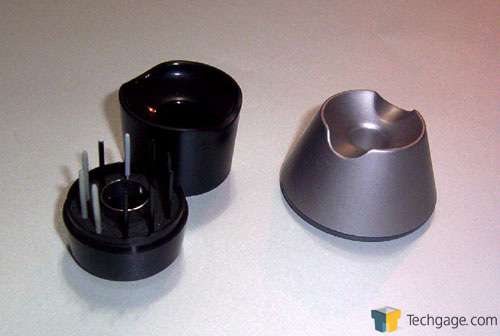 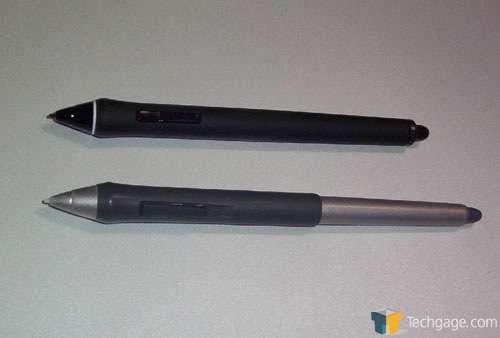 The new Intuos4 pen base is simply brilliant. I think this was one of the features that excited me the most and that I liked best about the new tablet. Before, with the Intuos3, I consistently had to store my nibs in a drawer, which would get overrun with more PC devices. Finding them was always difficult, and I believe I have lost one already.

With this new pen base you twist and pull the upper part off, and inside is a foam insert to securely hold all the pen nibs. In the center of the ring is the metal pen nib extractor. With the Intuos4 you get ten replacement nibs; five standard nibs, one flex nib, one stroke nib, and three hard felt nibs. The Intuos3 only had five nibs; three standard nibs, one stroke nib, and one felt nib.

The Intuos3 has an attached USB cable, which is quite durable and easy to position. The only hassle with this cord is when I have to put the tablet away after use. This may not have been an issue for others, who can keep their tablet on their desk. But having small kids at home I always put my tablet away after every use. Wrapping the cord around the tablet was my solution, but it does put kinks in the cording.

As an alternative though, the Intuos4 has new connectable USB ports, so you can unplug the cording and put it away. It makes it easier to store the tablet and stash the cord in a drawer. The Intuos4 just has a more portable feel to it; it feels lighter, although the Intuos3 is easily just as travelable. I had already voiced my concern about the USB ports, being that maybe after extended use they could become stripped out or bent, but that will require a longer tablet study. With proper care I believe the ports can last indefinitely. I find that they both have their own unique benefits.

Although I rarely use the mouse, the new Intuos4 mouse is again smaller and more streamlined. It is rounded, vs. the slightly square-like Intuos3 mouse. They both have left and right-click buttons and a center scroll wheel button. The only difference between the two is that the Intuos3 mouse has its programmable buttons on the sides, one on the left and right. The Intuos4 mouse has its two programmable buttons in the center of the mouse, one in front of and one behind the scroll wheel.

With use, I tend to like the Intuos3’s mouse better, because it fits my hand better. It is not a bad aspect, though, for the Intuos4 mouse could be a great match for someone. Also, the new position for the programmable buttons feels odd to me, as I’m used to having a button to press next to my thumb. Just like the pen, the Intuos4 mouse is only compatible with the Intuos4 series of tablets.

Finally we get to the tablets themselves. Both tablets have a very nice feel to them. The Intuos4 has a matte finish on the main part of the board, and then a glossy finish where the quick buttons and touch ring are located. The Intuos3 is a gray with a glossy clear coating over the the board, with the active touch area a matte gray. Both active areas are smooth, making precise pen strokes a snap.

To be completely honest, I like the gray color of the Intuos3 better. Now don’t get me wrong, the Intuos4 is extremely nice, the black is very sleek and modern, and suits the new tablet perfect. Yet as I had mentioned before, the Intuos4 gets smudged up and lint covered quite easily and it is extremely noticeable. If such things irritate you as they do me, you’ll be wiping the Intuos4 off with your dust cloth every five minutes. On the other hand, such small nuisances don’t show up as much on the Intuos3, due to its gray color. 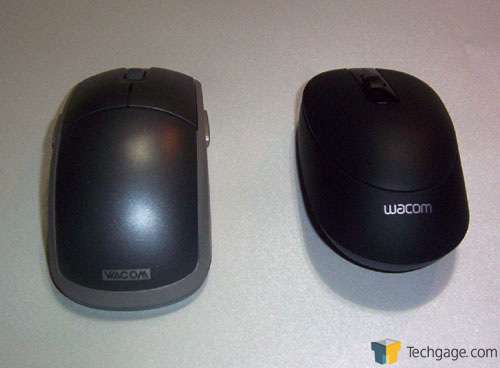 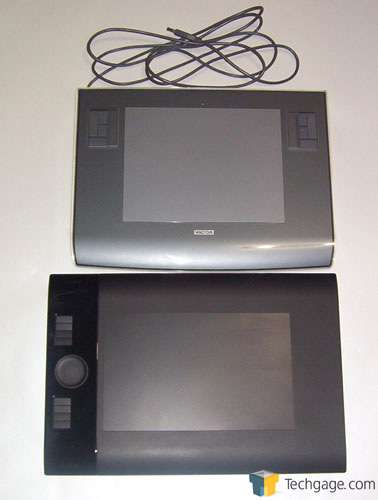 Besides the color, there are many significant differences in the tablets. The position of the express keys and touch pad are one such significant change. The Intuos3 has buttons and touch pads positioned on both left and right sides of the tablet, for both left handed and right handed users. The Intuos4 went above this and designed a side panel of buttons, which can easily accommodate left handed or right handed users by turning the tablet around so the buttons are either on the left or right.

I really love this feature. Being right-handed, I was consistently brushing my hand against the Intuos3’s touch pad while working. This would accidentally zoom my screen and mess up anything I had been previously doing. This isn’t something to completely condemn the Intuos3 over, but it certainly was a bit of an irritant at times.

Oddly, the Intuos3 and the Intuos4 weigh the same, listed as 1kg, or 2.2 pounds. Earlier I had mentioned that the Intuos4 feels lighter, and so found it odd that they are both listed at the same weight in their specifications. I didn’t weigh them, as I don’t have a scale to do so, but with my own comparisons holding and using the two tablets, the Intuos3 feels just slightly heavier.

I have even asked several people their opinion, holding both tablets and they also believe the Intuos3 feels a little heavier. Perhaps this is because the Intuos3 is not as wide as the Intuos4 tablet, distributing the weight differently. Maybe it is the attached cord to the Intuos3, causing it to feel heavier. Although I can find no specific reason, it is an interesting find none-the-less.