by Jen McPherson on August 20, 2012 in Peripherals

The latest tablet design from Wacom is the Intuos5 touch, boasting many of the favored features of its predecessors, and then some. The Intuos5 rises up in a class of its own, however, with additional features that aim to help users be more productive. The most impressive of these are, as you might expect, its touch features. It also has an add-on wireless option that previous Intuos products did not.

The Intuos5 I’m working with is the medium, with a work area of 8.8″ x 5.5″ (48.4 square inches). Comparing the Intuos5 and 4 side-by-side, they are roughly the same size. The Intuos5 has smoother corners, though, and no glossy surface areas like the Intuos4. The tablet does have an LED light that shines through the surface, marking the corners of the active area. At first I thought this wasn’t a useful feature, but it helps to note when the tablet is powered on. Otherwise the only light would be the touch ring LEDs, which are small and could be overlooked.

One thing that has not really changed from the previous version is the pen and the base. It is still the same pen style, a classic black pen with a rubber grip, changeable color rings, and pen base with ten extra nibs. The Intuos4 pen was tested and works with the Intuos5. Unlike the Intuos4, though, the Intuos5 does not come with a mouse (but one can be purchased as an add-on)

Installation of the tablet driver was easy. Insert the disc, follow the instructions, and the tablet will be functioning within minutes.

Working with the Intuos5 is as to be expected, fantastic, and then some. The tablet boasts the same 2048 levels of pen pressure and precision control with its pen. Depending on the program used, brush strokes can vary in line thickness or even opacity based on how firmly or lightly the pen is pressed to the tablet. This feature is often complimented in most modern art software via customizing and fine-tuning brushes to create painterly effects. Of course, how brushes act is still dependent on user adjustment in these programs, and so effects can vary based on a user’s knowledge and skill with the software they are using. The possibilities are massive, though, which makes tablet use for digital art essential.

Compared to the Intuos4, the Intuos5’s surface has a slightly different feel to it. Writing and drawing feels smooth and easy. However, the Intuos4’s surface does feels like it has a slightly better glide; it is not a truly problematic difference though. Much like the Intuos4, the major concern for the Intuos5 is tablet wear from pen rubbing. The pen nibs are still hard and wear easily. After a few weeks of testing the Intuos5, the current pen nib is already well flattened and somewhat pointed, and the surface of the Intuos5 has suffered some minor rubbing/scuffing wear from the pen. It is not major, but it is noticeable. 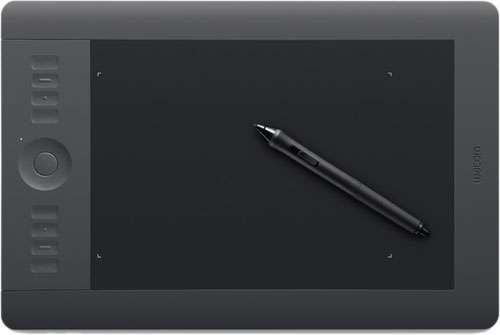 One of the significant differences in this model are the express keys. The Intuos5 has a solid surface area on the express keys; the entire section is molded from a smooth flexible material which the buttons are beveled into. This makes a lot of sense, as keeping the buttons clean in the previous version could be a little difficult. The Intuos4’s buttons were also relatively narrow and somewhat difficult to press, while the Intuos5’s buttons are broader and spaced apart better and much easier to press. There are eight express keys in total, with four above the touch ring and four below it. The two middle buttons in each group of four have a bevel in the middle, one with a dot and the other a dash, to help users feel which button they are touching without having to look at the board.

Something I appreciate is that the tablet settings can be programmed to express keys, and that pressing the settings button pulls up a configuration box to specifically address the area you want to adjust: either the express keys, pen options, or touch features. This then opens specific panels in the Wacom Tablet Properties panel. This makes it easy to adjust settings quickly, especially for program specific modifiers.

Unlike the Intuos4, the Intuos5 express keys do not have an LED display to show what each key is programmed to. At first this was a disappointment, as having the displayed program keys was a helpful feature. The Intuos5, however, impressed with its new display system for these keys. When the keys are touched and held, a menu on the computer screen pops up on the left-hand side and shows which button you are currently touching and what that button is programmed to execute. This menu does not interfere with currently open windows and is slightly transparent so you can still see the screen beneath it. Although the LED display was nice, it is easy to see why this feature was done away with. It encouraged the user to look away from their work down at their tablet and essentially slowed productivity. With the menu being on the screen users don’t have to take their eyes away at all.

All express keys are still programmable, and can be customized for specific software programs.

The touch ring is essentially the same as the predecessor, with four programmable options. Again, it is part of the same smooth, solid molded side panel, beveled down into the surface. The flexible material makes button depression easy and practically soundless. It allows for easy zooming in on work as well as for fast alternating between brush sizes. This is one feature I love and always use.