The great land of Ardania seeks a powerful mage to build a bustling empire and command an army feared by others – are you in?

When I first caught a glimpse of Warlock: Master of the Arcane, I thought it was an expansion pack for Sid Meier’s Civilization V – and I’m sure I’m not alone. On the surface, both games look undeniably similar, and even the mechanics for the most-part match up. But while the main Civilization series focuses on real-world events, landmarks and rulers, Warlock is pure fiction.

I think it’s safe to say that if you enjoy either Warlock or Civilization, you’ll likely enjoy the other – but it’s important to not dive into Warlock expecting its refinement to be on par with Civilization’s.

As much as I’d love to cease all mention of Civilization V from this point on, it’s too difficult. Warlock might take a lot of cues from Master of Magic and is based on the world created in the Majesty series, but on the surface and with its mechanics, Warlock has a lot more in common with Civilization V. For those not familiar with either Civ or MoM, Warlock is a 4X turn-based strategy game that implements fog of war, uses hex tiles and has you build up your empire from scratch.

Whereas Civilization‘s research tree focuses on real-world technology, Warlock’s is all magic-based. At the get-go, you’ll choose which skills to learn or improve, and continue choose a path after a set amount of turns. Of the magic in the game, there are two categories; Perks and Spells. Perks are bonuses to your empire, while spells are offensive and defensive skills.

The magic system found here might appear simple at first, but it in fact requires a lot of planning and understanding. There are buffs (and debuffs) that can be applied to single units, and other buffs and debuffs that are meant for cities. If you focus in one type of magic too much, it might hinder your ability to properly accomplish your goals later.

In addition to straight offensive skills like “Firestorm”, “Ice Ring” and “Shadow Bolt”, there are various summons that can be used as well. Fortunately, these summons can be placed on any tile you desire – as long as you’ve uncovered it. Without this ability, some battles would be made much more difficult. 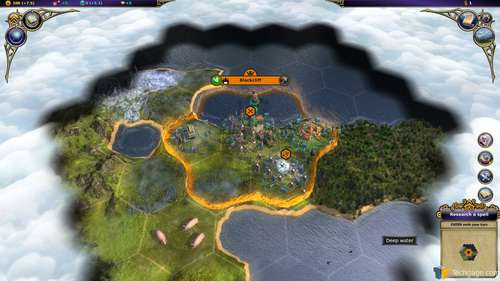 Many of the actions in Warlock are based on three possible things: population, resources and turns. Learning new magic is based on a number of turns and your research resources, while buildings require a certain population or pre-requisite building – both of which require a certain number of turns to accomplish. A turn requirement also applies to casting spells, so even with a boatload of mana, you can’t expect to deplete it in one go.

Resource management consists of food, mana (for using spells), research points (for learning new spells) and gold. Various things built inside of your empire can give bonuses to any one of these resources, and there are special tiles around the map where special buildings can be constructed to gain access to unique resources.

An interesting mechanic Warlock implements is a quest system, where quests can be given to you at any time either by a random person or a god. These can range from building a specific building to taking out monsters or another empire; most quests offer rewards that make the hassle worthwhile. You are able to refuse a quest, but doing so to a god-given request can lower the respect that god has for you (which can lead to obvious repercussions). 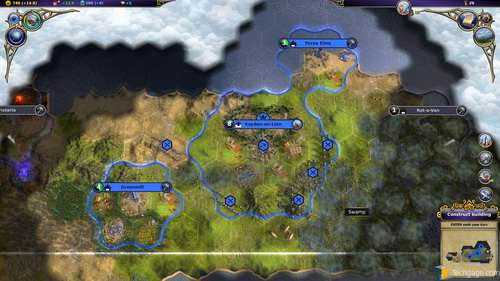 Like most RPGs, you can level up your troops and earn valuable gold by killing random monster spawns. These spawns can offer up some of the most difficult challenges Warlock has to offer. If you’re taking on a single unit, things are sure to be fine, but if you encounter a large group of monsters, that’s when you better hope your army is built-up. Some spawns contain a mini-boss monster as well which, if unprepared, can take out an entire unit in one shot.