An area where Warlock shines is with exploration. The worlds are colorful, and there are many different special tiles found throughout a map that are not only useful to draw resources from, but add to the game’s atmosphere.

Increasing your ability to explore, there are portals strewn throughout each map that can be entered to access other worlds, a la Master of Magic. Some of these portals might have a group of monsters right at the drop (which can exit if desired), while others could offer useful resources and also double as an ideal spot to built up your troops.

One of the best aspects of Warlock: Master of the Arcane that I’ve failed to mention up to this point is its $20 pricetag. For fans of 4X TBS games, that alone can make picking it up an easy choice. It’s not perfect, but neither are most other games in this genre. That said, there are some complaints I do have, but most are minor and some might be due to personal preference. 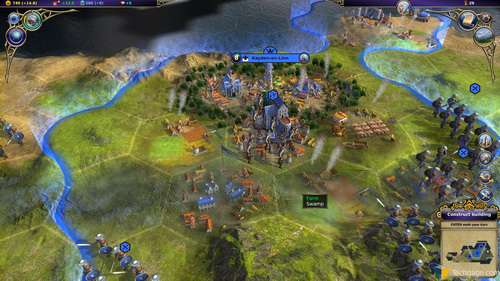 The biggest issue I have about the game is that there is no way to avoid war if someone asks (or rather, non-noticeably demands) resources from you and you don’t want to provide them. It’s either give the goods over, or go to war. Civilization‘s mechanics aside, this just doesn’t make much sense.

Another thing that struck me is that there is no top view – a feature I use religiously in games like this. When you have a busy empire, a top view can really help you move fast and find a particular resource or unit easier. Along similar lines, there is no way to click and drag the map around. Rather, moving around Ardania requires you to move your cursor to the edge of the screen, which I found to be annoying after a while. 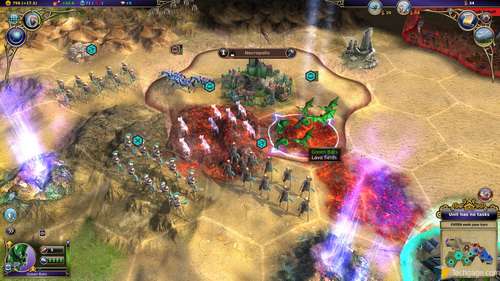 Moving onto an outright odd issue, if another empire takes care of a goal in one of your quests, it completes it for you (eg: clearing out enemies). This means you can earn a reward because someone unrelated took care of it for you; this just shouldn’t happen.

And speaking of enemies, sometimes they can move an insane number of tiles; just when you feel safe, you might not be. Lastly, there is minimal micro-management regarding land tiles and their resources (something some people might consider an upside), and some units share icons despite being slightly different fighters (eg: warriors vs. rogues).

None of these issues are game-breaking, and few of them take away any lustre I find this game has (aside from the lack of a top-view, perhaps). Though I wouldn’t rank the mechanics as high as Civilization‘s (I am sure some would argue this), I found Warlock to be very enjoyable, and a fresh change from the usual Civ fare. At $20, Warlock: Master of the Arcane is a game that 4X fans just can’t afford to miss.

Warlock: Master of the Arcane