Page 2 – A Look At The Software

The interface of the DL4100 should look familiar to those who read our EX4 review.  While different, the DL4100’s UI is clean and very straightforward.  Devoid of a lot of extraneous icons, the flow and feel of the UI is smooth, but slow to initially load in non-IE browsers.  The reason for the slowdown is the Capacity pane.  The entire UI loads except this, and then 4-5 seconds later, it loads with the disk usage breakdown.  This is reproducible in both Chrome and Firefox, however in IE, it loads right up.

Thankfully, this is the kind of thing that WD should be able to address in a future update.  From the home screen, we can monitor network, CPU, and RAM usage, check for firmware versions and updates, and monitor our storage. 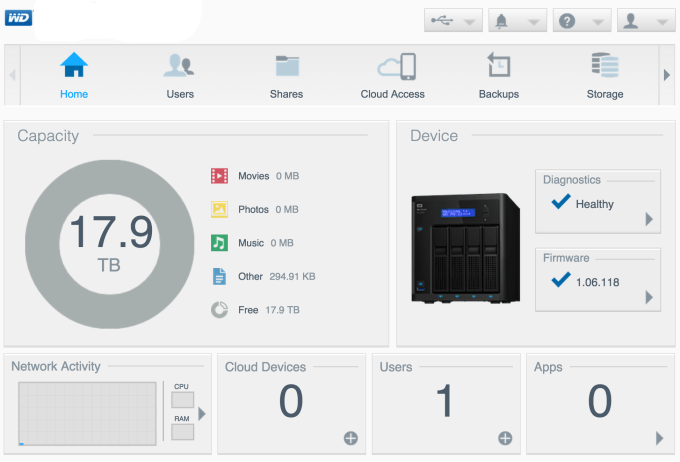 When the pop out arrow is clicked for resource utilization, we can view a more granular breakdown of what exactly is doing what. 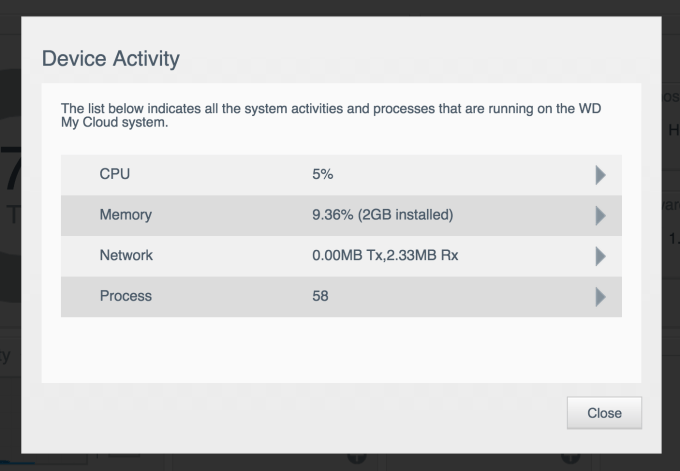 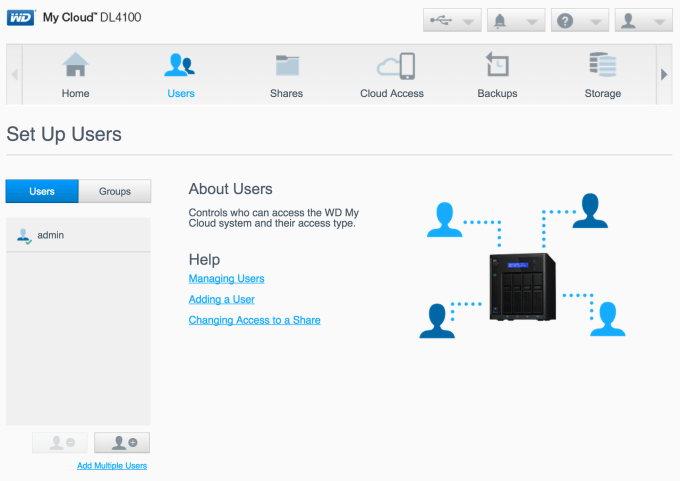 Speaking of shares, the Shares tab gives users the ability to add, delete, and edit shares on the DL4100.  There are a few created by default, and others created when certain functionality is enabled (like Apple’s Time Machine), but the majority of shares that will be used will need to be created by the user.  With each share, permissions can be set up.  This includes user permissions but also more advanced features as NFS (for those environments that need that). 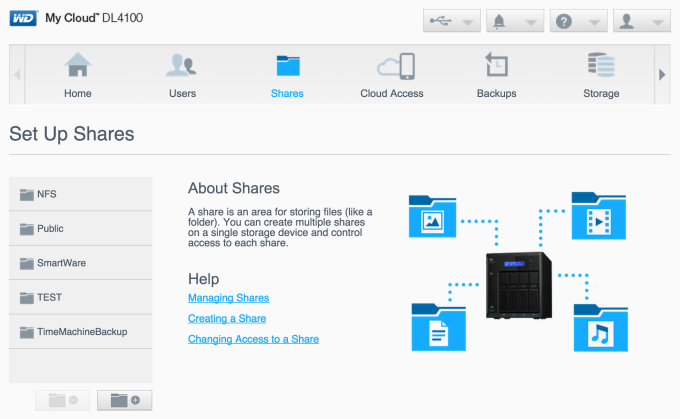 The next tab, Cloud Access, is meant to be used by the user to access the data stored on the DL4100 from anywhere with an Internet connection.  To pair a smart device, a code must be generated.  This is done on the NAS itself, through the UI. When a code is generated, an activation code is granted.  This twelve digit code has an expiration period of 48 hours and after that time, a new code will need to be generated. 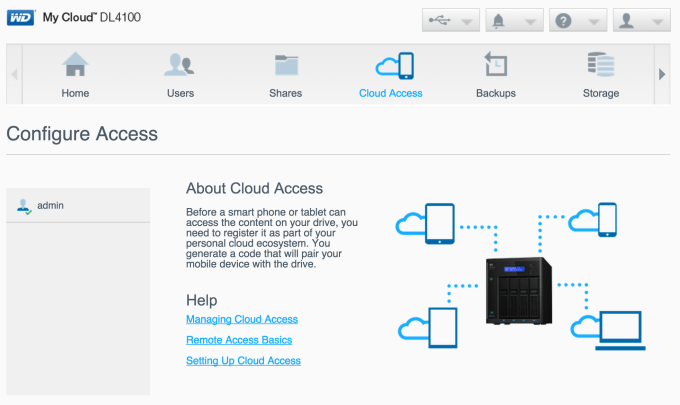 One of the best aspects of NAS is that it’s accessible across the network.  This makes a NAS box perfect for storing backups.  If a USB drive (or enclosure) is large enough to store the contents of the NAS, a job can be created to backup the NAS to that drive.  Or, as mentioned earlier, a USB device can be backed up to the DL4100.  If another My Cloud device is accessible by the DL4100, a NAS to NAS backup can be performed.  This is a bit limited compared to other offerings by competitors, as some allow their NAS devices to backup to any rsync-capable devices.  However, if another My Cloud device is on the same network, a backup job can be created to either copy the contents of one to the other or synchronize between the two.

Another backup possibility is to backup one directory on the DL4100 to another location on the same NAS.  These are referred to as internal backups.  I suppose someone could think of a useful way to use this but I am at a loss.  You halve your storage and retain no additional redundancy from hardware failure.  Nonetheless, it’s a welcome option as if it’s not used, there isn’t any impact.  With Cloud access setup, backups can be made accessible over the Internet.  The final backup option is one for cameras.  This can allow a camera to be connected via USB to the NAS and transfer the photographs over to the NAS. 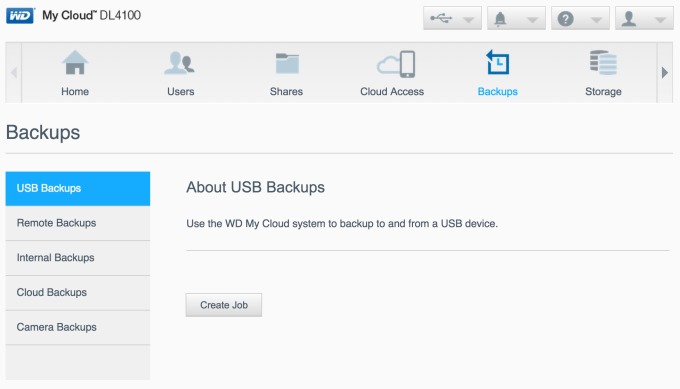 For users that want to use the DL4100 in ways other than RAID 5, they can.  Disks on the DL4100 can be configured in JBOD, Spanning, and RAIDs 0, 1, 5 and 10.  This is found in the Storage tab of the UI.  Also in this section is heath status of the DL4100’s disks, iSCSI setup and something that WD calls “Volume Virtualization”.  For those that wish to use iSCSI, Western Digital has set up the DL4100 to allow one LUN per iSCSI target.  Volume virtualization is a feature that allows the DL4100 to act as an initiator and connect another device’s iSCSI targets to it.  This gives the DL4100 more scalability when it comes to adding additional storage to the NAS. 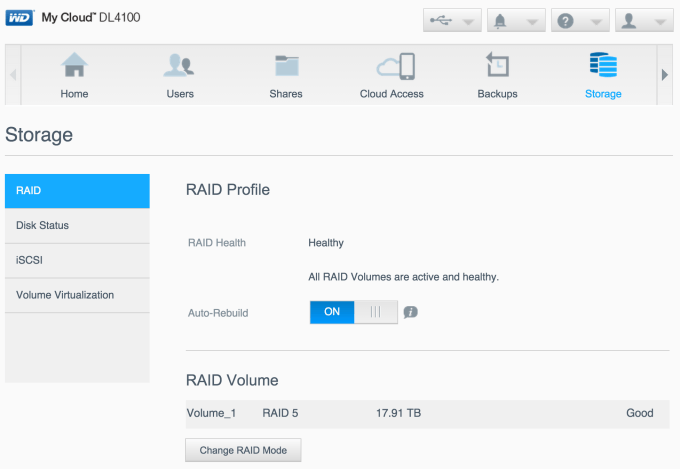 The appeal of multi-purpose NAS devices to many are the applications that can be installed on top of the NAS’s firmware.  Some ecosystems are extremely rich, while others are somewhat barren.  Western Digital’s app ecosystem sadly falls into the latter.  This can certainly be addressed over time, but at the time this review is published, there are only a handful of options.  Sadly, the available apps for the DL4100 are the same was what we saw in our EX4 review, and that was in November of 2013.  These are third-party apps, so developers have to want to adapt their application for the DL4100, but it would be nice to have seen more apps available today than there were 15 months ago. 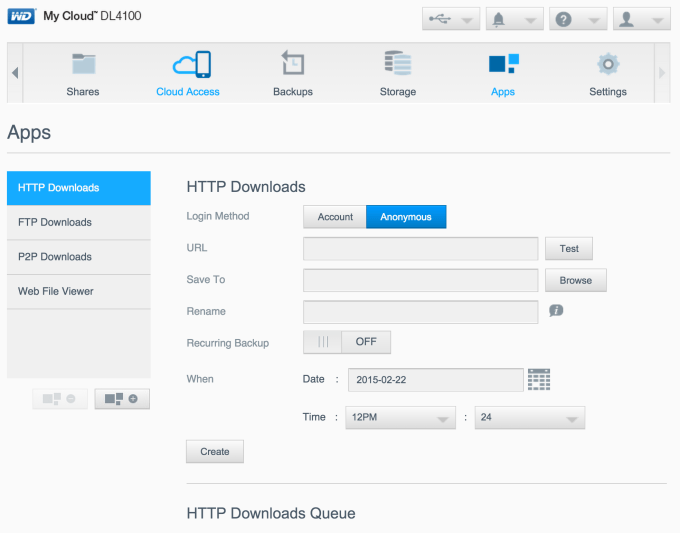 Western Digital does make the installation of applications easy.  Simply check the box next to the apps that you want to install and it will download and initialize the app straight away. 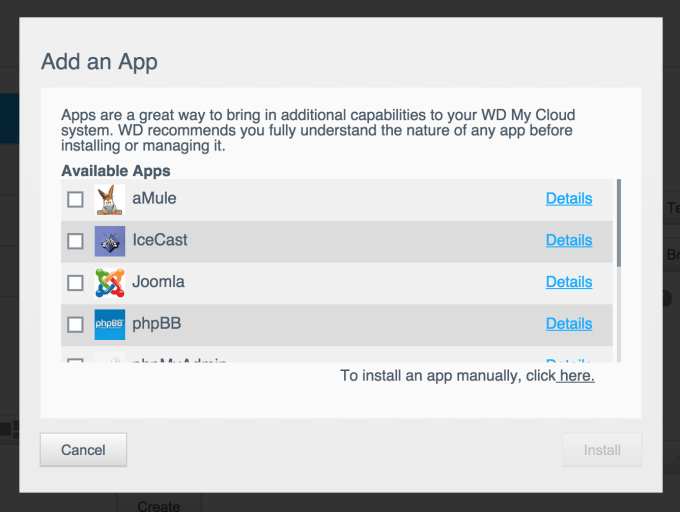 The final area of the DL4100’s UI is the most important.  All settings for the NAS can be setup and altered on the Settings tab.  This is where the DL4100 can be given a hostname, IP address, and joined to a Windows domain.  Services like iTunes and DLNA servers can be enabled and diagnostic tests can be run. 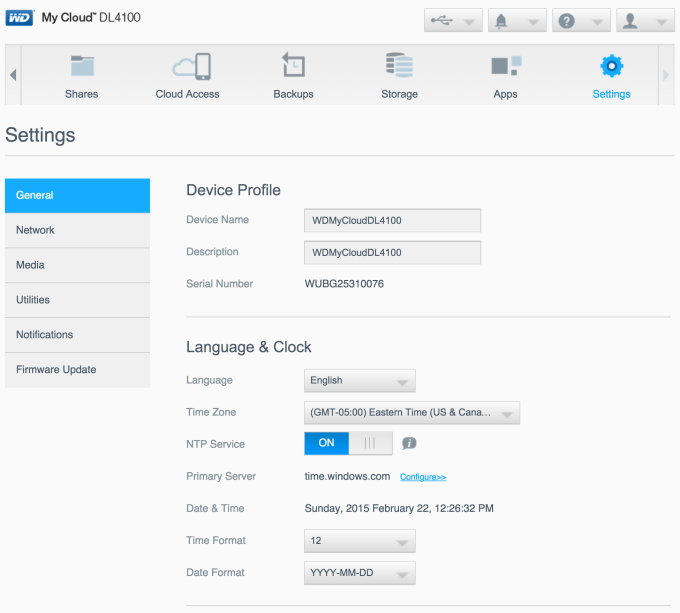 Additionally, this is where the DL4100 can be setup to communicate with you through email and SMS alerts.  These can be configured to alert on both critical and informational warnings.  Finally, this is another place where the firmware can be updated.  Concerning updates, these can be setup to install automatically on a user-defined schedule, should this be appealing to the IT administrator.