In the past, we have conducted straight file copies to and from the NAS devices. Using large single files and directories with thousands of smaller ones, we were able to get a real-world idea of read and write speeds when averaging out multiple run. This has treated us well, and is a method still used by others, but going forward, we have a new tool in our belts.

A few years ago, Intel created their own benchmarking tool for NAS devices called NASPT. Short for NAS Performance Toolkit, NASPT is, to quote Intel, “a file system exerciser and analysis tool designed to enable direct measurement of home network attached storage (NAS) performance.” Essentially what the company did was create a tool that mimics day-to-day workloads, such as video playback, content creation and office productivity.

By creating this tool, Intel has made it extremely easy on those of us tasked with benchmarking NAS devices. You install NASPT on a host machine (their recommended specs are 32-bit XP SP2 and 2GB of RAM), map a drive on that host that points to the NAS and decide which tests you want to run. These are the specs that I used when building out our test machine.

Our test bed is a simple, everyday machine.  It’s a capable PC and one that worked perfectly for the NASPT test.  While getting a bit long in the tooth, we continue to use it to keep our results consistent and comparable.  This will be changing soon but for now, this is what was used.

For our iSCSI tests, a Windows 8.1 machine was used.  Its specs are:

Western Digital’s DL4100 has a lot to offer to both home users and small businesses.  On the Intel NASPT tests, the DL4100 is the fastest NAS we have tested to date.  On straight file copies with robocopy, it is slightly slower than the ASUSTOR AS-204TE that we looked a short while ago.  In real-world testing, we streamed a high quality Blu-ray rip across the network to another PC running XBMC while running cross directional large file transfers.  This is in no way a scientific test, but the fact that the DL4100 was able to provide a seamless streaming experience should warrant mention.

A major advantage that the DL4100 has, as well as the other new products being announced today (EX2100, EX4100 and DL2100) and the other WD NAS offerings, is that populated units ship with Red NAS drives.  These are drives that have been designed for NAS use and will work well in such an environment.  With Western Digital manufacturing both the drives and the NAS devices, the company should be able to leverage this fact when pricing its units.  Speaking of pricing, what will these cost? 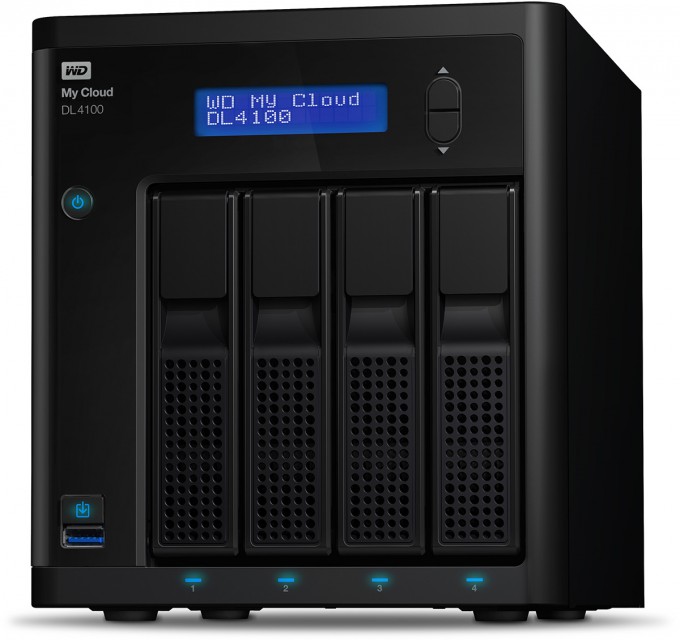 Western Digital actually has four new NAS devices launching the day this review is posted.  As mentioned earlier, they are the EX2100, EX4100, DL2100, and the DL4100.  The EX models are powered by Marvell Armada CPUs and are designated as Expert Series devices.  Their target audience is SOHO and small business.  The DL models like the DL4100 that we have on our bench today are being marketed towards small businesses and are powered by Intel’s Atom processors (DL2100: C2350, DL4100: C2338).  Pricing for this DL4100, populated with 24TB, is $1,549.99 USD.

Western Digital continues to impress with its My Cloud lineup.  While third-party support for applications is still lacking, as a platform strictly used as storage, the DL4100 would serve any small business well.  I would like to see the ability to view performance metrics with a bit more granularity, or some at all.  Disk IO would be nice to see, for example. Nitpicking aside, the DL4100 is a solid device and the embodiment of WD’s logical evolution of its NAS brand.

The DL4100 earns an Editor’s Choice award for performance and ease-of-use.