WD is somewhat new to the NAS game, but it made a splash with its single-drive My Cloud that we took a look at last month. It’s now following-up with a 4-bay variant of that NAS, focused more on the higher-end user. Better-still: It comes diskless, or packed with WD’s own Red NAS drives. How well does the company’s latest NAS stack up?

Last month, we took a look at the first product in WD’s My Cloud lineup.  In our review, this editor found the device approachable, not only for those whom aren’t overly technical, but also for those on a budget.  The 2TB version that we looked at had an MSRP of only $150, and can be found online at the time of writing around that price.  For those looking for a better deal, the 3TB version can be had for around $180… making the $30 jump a no-brainer.

While we were testing the My Cloud 2TB, we were given hints of WD’s next product in its My Cloud team.  What started as a simple teaser photo of a raised curtain, showing a very faint four bay unit, quickly became an all-out deluge of information on what we would come to know as the My Cloud EX4.

I have worked with four bay NAS boxes before and currently run a small Synology unit that uses notebook drives on my personal network.  It has been used strictly for backup purposes for going on two years now, and I have come to trust the additional peace of mind that comes with a RAID 5 setup.  I know, that if I lose a drive, I can easily take the spare drive I have sitting in an anti- static bag to the left of the NAS and replace the failed hardware with it.  Once it’s been integrated into the storage pool, I’m back in business.  That being said, that’s really my in-depth limit on four bay NAS boxes, so when WD came to us with the idea of us putting its new EX4 through its paces, we jumped at the opportunity. 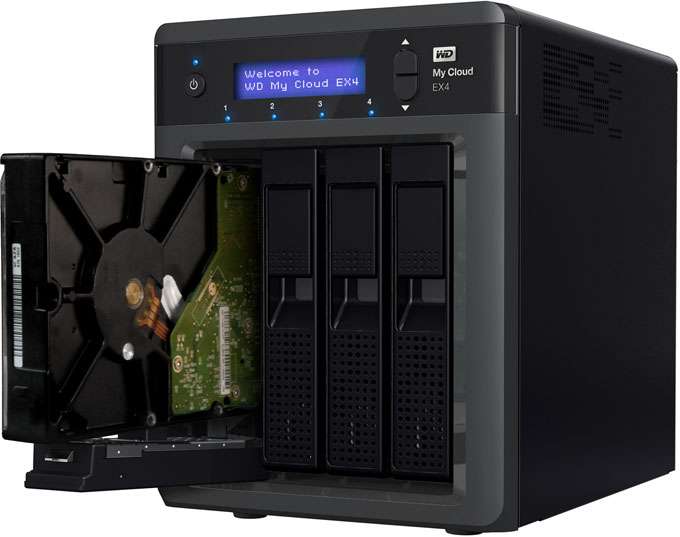 Immediately, there are a few things that set the EX4 apart from the NAS pack WD has decided to run with.  The front face of the EX4 has a small LCD screen that can display system and diagnostic information, as well as alerts that the user might need to take note of.  Next to that screen are a pair of buttons that allow the user to interface with that screen.  By cycling up and down through the available options, the LCD screen can display basic information about the EX4 such as hostname, IP address, drive health, temperature, fan speed and in the case of this editor, rebuild time.  Curious how the EX4 would react, I pulled the right most drive out in the middle of a large data set copy – but more on this a little later.

The front of the EX4 has four easily accessible drive bays, each with a release handle at their top.  I call these “bays” because unlike many other offerings, WD has decided to forgo drive sleds and simply make the front bay doors just that, doors.  Actuated on springs, the doors open outward and downward, granting easy access to the drive bay.  Once the drive is about three-quarters of the way in, it hits a spring-loaded lever that will provide resistance when closing the door.  This lever helps eject the drives when the door is opened, as well as gently guide them into place when the door is being closed. 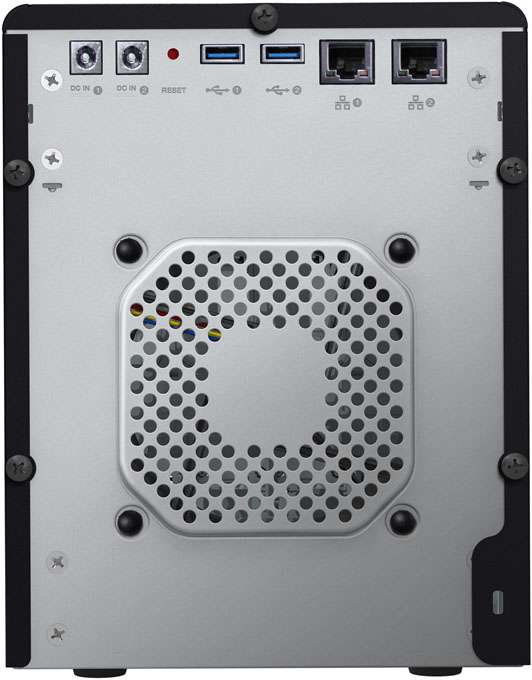 The back of the EX4 holds its own share of surprises.  Turning the NAS around, we find a 90mm fan that spins at 3400 RPMs, a pair of USB 3.0 ports, dual gigabit NICs and a set of power ports.  With many NAS devices designed for SOHO environments, we see dual USB and network ports, but this is the first time I have seen redundant power on a device of this nature.  There are offerings with this capability, but they are almost entirely found in rack-mountable form.  While the EX4 ships with only one power supply, a second one can be purchased from almost all current WD partners for a currently unknown price.  This is a nice feature, but one has to ask themselves, “Do I have two independent circuits in my office or home?”  If the answer is no, you are really only protecting yourself from power adapter failure, but as far as nice features to have, this is a definite feather in WD’s cap.

On a hardware and software front, the EX4 has some nice specs.  Fresh from the WD-provided spec sheet, with the EX4 you get the following:

On the next page, we’ll take a deep-dive into a look at the device setup and its interface.