For our real-world transfer tests, the source files are stored on our OS drive, which avails us a top-end read speed of 500MB/s+. Unless the USB device we’re testing is able to write in excess of that, there should be no bottleneck.

Drives are formatted to NTFS with 4K sector sizes.

Admittedly, running this test on most USB flash drives, is not entirely important given the typical manner in which they’re used, but it’s our goal to see where one excels over another when dealing with such an intensive test. IOPS performance would be very important if you were to install an OS on a flash drive, as long as the bandwidth throughput is also good.

Interestingly, the Ultra falls behind the non-Ultra in IOPS testing. Again, this isn’t of major importance for an external drive, since an OS isn’t going to be installed to it, but this could impact transfers where hundreds or thousands of files are involved.

The Ultra didn’t fare well against the non-Ultra with Iometer, but things even out with HD Tune. In fact, the Ultra is the leader of the pack here, both in throughput and latency.

Over the past few years, many storage companies have been jumping on the CrystalDiskMark bandwagon to help strut their product’s performance, and it’s easy to understand why. Compared to others, CrystalDiskMark delivers results that are much higher, and in some regards, they could be considered unrealistic given that real-world tests and even other synthetic benchmarks never seem to back up its claims. We include it for the sake of interest and because it is still a very thorough benchmark.

Once again, more love for the Ultra drive. The non-Ultra came ahead in just two tests; this is about as random as random gets… there’s just no logic or guessing where either of these drives is going to excel.

The Ultra is a tad slower where 4K writes are concerned, but 64KB and up are improved. This is useful if the drive is actually formatted as 64KB, which would assume mostly large files are being stored (and by large, I mean 64KB and higher, as a 1KB file on a 64KB formatted drive will still use 64KB).

For real-world testing, we use a set of files and folders for the sake of measuring transfer speeds, and also convert images and music on the storage device to see just how well it fares for large intensive operations. For the transfer speeds, we use both 4GB and 16GB files and folders, and for the former, we also perform copy tests, which refers to copying the file or folder on the storage device.

Above, I said some of the results are as random as random gets, but our real-world testing takes things to the next level. While the Ultra proved to be slower IOPS-wise of these two drives, our 16GB folder copy, which contains about 16,000 files, proves that Iometer is good from a synthetic standpoint only.

Overall, both drives swapped their leads back and forth, so there’s no declaring one a winner. The performance we do see is good, and that’s all that matters – it’d be a worry if one of them happened to be really slow in a given transfer. The 16GB non-Ultra result is a bit stark, but 5 minutes to copy 16K files isn’t that bad.

With all we’ve learned about WD’s My Passport Ultra over these three pages, do we have a winner? Absolutely. WD offers a great overall package with its Ultra, what with the robust backup software and included pouch. Looking at other portable options on the market, I can honestly say that WD is currently offering one of the best looking options as well.

The Ultra 1TB can be had for about $100 online (2TB is $160), which is $10 above the non-Ultra. The differences, as discussed earlier, is that the Ultra includes the soft pouch, the ability to use Dropbox for backing-up, and also the ability to backup to other (even non-WD) drives. If none of that matters to you, then the non-Ultra would be a better choice.

At $100, there are a couple of cheaper models out there, some even $20 cheaper. I can’t speak to their quality, however, and neither include backup software (or the pouch and other perks). Again, if the aforementioned perks don’t matter to you, there are lesser-expensive options that might be worth considering. 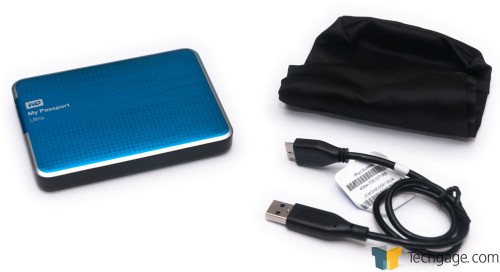 When I took a look at the My Passport last summer, I complained that the backup software, SmartWare, was a bit too clunky for my liking. This time around, despite it being the same exact software, I found myself enjoying it more. Either I was a bit impatient last time, or it just takes a little time to grow on you. Either way, it might be a bit clunky, but it becomes easy-to-use very quickly, and it works very well. The ability to include Dropbox as a backup source is great as well, although it’d be way better if WD added Google Drive and Microsoft SkyDrive to the list (not that a list is a single option). It’s not as though WD is giving us free Dropbox space here, so I don’t understand the exclusivity.

As we saw in our performance reports, the Ultra performs just about as we’d expect a 5,400 RPM mobile hard drive to. It’s not amazing performance, but it’s hardly lacking, either. 16,000 files (16GB) in under 2 minutes seems pretty good to me. And of course, along with all of this, you also get a pouch, perfect for those who like to keep their drives as protected from scratches as possible.

WD offers a great product with the My Passport Ultra, and while some things could be a bit improved, the biggest hit comes down to the fact that only a single cloud solution is offered. Hopefully that will be remedied in the future. But for what it offers now, and the fact that it does everything it does offer extremely well, the My Passport Ultra earns our Editor’s Choice award.