In 2012, Western Digital made changes to both its product-line naming schemes and also how it presents itself as a company. Changes so small, so subtle, that even I didn’t clue in until long after the fact.

For starters, when talking about the company’s products, “WD” is now preferred over “Western Digital” – the latter is instead designated for corporate stuffs. Remember the names “Caviar” and “Scorpio”? They’re a thing of the past. While at the start of 2012, we would have presented a review to the effect of “Western Digital Caviar Green 2TB”, appropriate naming today would be “WD Green 2TB”.

Even the company’s enterprise offerings have been affected. The drive we’re looking at today for example, is the “WD RE”. Had it been released a year ago, it would have no doubt carried the name of “RE 5”. Whatever WD’s goals are with these changes, they emphasize the need to keep specific model names (eg: WD4000FYYZ) in mind when on the lookout for a new drive. You wouldn’t rush out and buy a Toyota Corolla without knowing the year, would you?

With all of the changes WD made during 2012, it’s a little surprising that the company didn’t adopt a new slogan. If it had, an appropriate one would have been “All Your 4TB Are Belong To Us”, because it’d be totally fitting. As it stands, there exists three 4TB models on the market, and each one of them falls under WD’s umbrella. We already took at look at WD’s own Black 4TB a couple of weeks ago, and alongside that is an HGST model (Hitachi, WD-owned). Suffice to say, we need some competition, and soon. 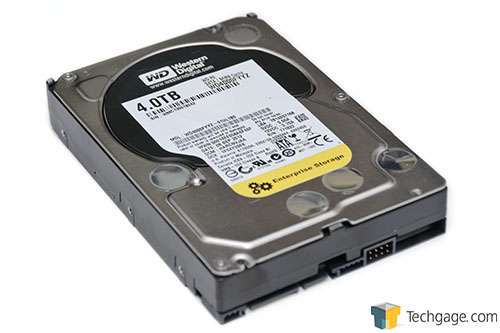 Despite the lack of competition, it’s nice to have a couple of 4TB options on the market – especially if you’re looking to maximize the amount of storage space in your desktop, server or NAS. Unlike the Black 4TB that we took a look at a couple of weeks ago, WD’s RE is focused squarely at the enterprise. However, it’d also be suitable for those who demand the highest level of data security possible. While both Black and RE carry 5-year warranties, RE drives have been designed by WD to be the most stable, reliable and long-lasting in its entire line-up. This of course carries a premium, but to many, it’s worth it.

We’ll talk about some specifics in a moment, but first let’s take a quick glance to see where RE falls into place among WD’s current line-up:

With a top-level view like this, WD’s RE doesn’t look too dissimilar to the Black. As such, it’d be easy to write off the RE as being the same drive but with a higher price-tag, but much like how NVIDIA’s Quadro cards retail for much higher than their GeForce counterparts, WD’s REs pack extra features under the hood that make it better-suited for use where uptime is imperative.

Multi-Axis Shock Sensor – This is an additional sensor found within the drive dedicated to detecting shocks, and when one is detected, the drive’s mechanics help compensate for the sudden movement.

Dynamic Fly-Height Technology – For increased stability, the height (or fly height) of the head is adjusted in real-time during each read / write cycle.

Time-Limited Error Recovery – This is a feature you may recall us talking about in our look at WD’s Red NAS hard drive. In effect, it prevents error correction from getting in the way of a successful write. This makes RE drives best-suited for use behind a RAID controller (“RE” in the product name stands for “RAID Edition”).

Vibration Reduction – Using an “enhanced” version of the company’s “Rotary Acceleration Feed Forward” technology, the drive is able to monitor both the linear and rotational vibration of the platters in real-time, and compensate where necessary. It’s never ideal to run any mechanical hard drive in an environment where it can vibrate on a regular basis, but the company’s RE drives, along with its VelociRaptor drives, can deal with it better than the other drives in its line-up.

Extended Thermal Burn-in Testing – WD punishes its enterprise drives like no other, both for their thermal capabilities and endurance. If we saw what went on behind the scenes there, we’d probably want to cuddle our drives afterwards.

1.2 Million MTBF – At some point, most hard drive manufacturers dropped the “MTBF” (mean-time before failure) rating on their drives. To a point, I can understand why, as it’s a number most people aren’t going to keep in mind. However, WD does include such metrics on its enterprise offerings, such as the RE, and notes that it was achieved through field-testing.

As you can see, there’s quite a bit extra that WD packs into its RE drives, with each feature sharing the same ultimate goal of stability and data security. So, while Black and RE share similar specs, RE is the route to take when data is of utmost importance to you.

Speaking of Black, when we took a look at WD’s 4TB model a couple of weeks ago, we were impressed overall by the fact that a 4TB Black even existed, but were left a little underwhelmed in the performance department. Now, it’s time to see where the RE 4TB stands.

Before we get into testing, though, it’s important to note that since our last review, we changed a couple of things in our test suite, requiring us to re-benchmark all of our drives. Unfortunately, the Black 4TB was not part of this re-testing, as I accidentally left the drive elsewhere. I’ll soon be getting it back, and once re-benchmarked, I’ll update the graphs in this review.

Because we’re amidst an age where most people are using an SSD as their primary drive (and if not, it’s probably planned), we’re beginning to treat mechanical hard drives as storage drives entirely, not OS drives. As such, we’re now partitioning the drives using 64KB cluster sizes, as this is efficient for a drive that’s storing a lot of large files.

That all taken care of, our slightly updated testing methodology can be seen on the following page, with our first results following that.