Most hard drive launches require just a couple of slides and a bit of documentation, but WD went a step further with its presentation for the Se series. It’s clear that the company is treating Se as a rather big deal, because it’s positioning itself as an authority on bulk storage. As mentioned before, Se is targeted at the NAS and scale-out markets, and the company has data to explain where we’re headed storage-wise.

Given we were not told otherwise, we assume the data seen below is the result of WD’s own research. For the scale-out market, it’s predicted that total exabyte (1.048 million terabyte) shipments will jump 6 – 7x between 2012 and 2020, with the cloud being the biggest cause. For that purpose, SSDs and high-performance hard drives are not the answer – they’re too expensive, and that’s not going to change soon in their battle versus mechanical drives. So a drive like the Se, which offers the customer cash savings in exchange for less durability, can prove to be a boon for the market. 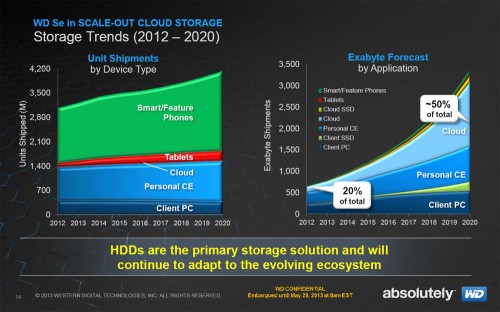 WD also touts the Se series as being the perfect solution for storage replication where RAID is a less-ideal option. Going that route can improve system uptime, performance, and of course, reliability. That said, those that require huge levels of throughput are still recommended to consider the Re series due to its theoretical increased lifespan.

That’s scale-out – what about NAS (network-attached storage)? While many of our readers may equate a NAS to being a device that holds 2 – 5 hard drives, higher-end devices can hold dozens. For a lot of customers, Se can reduce the total cost of ownership; we established earlier that the Re series costs $80 more per 4TB drive than the Se, which in a 24-bay NAS amounts to a difference of $2,000.

Like the scale-out market, WD sees huge inclines going forward for the NAS market – even with SOHO / SMB use. Based on the chart in the slide below, predictions are that the personal and SOHO market’s demand for storage will increase by about 3 – 8x, while for SMB, the difference looks to be closer to 15x. 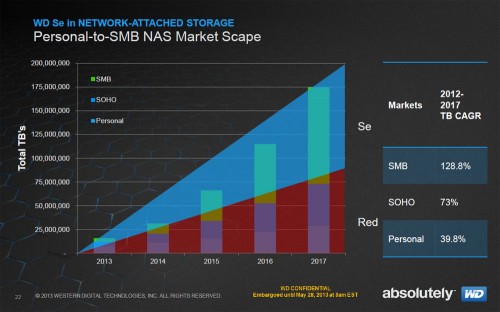 I mentioned before that despite its mass storage focus, the Se series can suit home users just fine if you happen to like all of what it offers over desktop drives (namely, enterprise features) and the NAS-focused Red. As far as WD is concerned, anyone owning a NAS capable of holding 4 or more drives could consider Se, but again, Re would be ideal for those requiring massive annual throughout (unlikely in a home environment, but possible in a small business).

That said, WD gives an outline below of what users should consider based on the size of their NAS. Xe always wins for those who require the ultimate in performance, which would only be relevant to those using professional NAS solutions equipped with 10Gbit/s Ethernet. Re is perfectly designed for the enterprise, and Se basically fits anywhere if your needs align with its features. For smaller home / SOHO NAS devices, WD still recommends its Red series, but that currently tops-out at 3TB per drive. 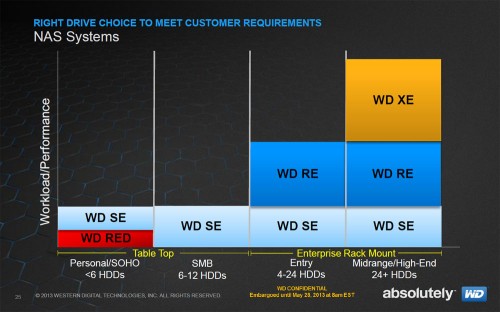 As you’d expect, WD packs many features into its enterprise line. Most of these could be considered irrelevant for home users simply because businesses tend to favor reliability more due to their much heavier usage. Here’s a quick run-down of some enterprise-specific features bundled with the Se (and Re, save for the differing MTBF).

Time-Limited Error Recovery – This is a feature you may recall us talking about in our look at WD’s Red NAS hard drive. In effect, it prevents error correction from getting in the way of a successful write.

Multi-Axis Shock Sensor – This is an additional sensor found within the drive dedicated to detecting shocks, and when one is detected, the drive’s mechanics help compensate for the sudden movement.

Dynamic Fly-Height Technology – For increased stability, the height (or fly height) of the head is adjusted in real-time during each read / write cycle. 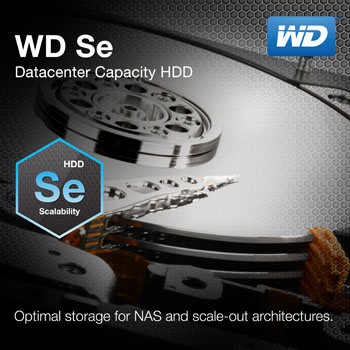 StableTrac – The drive’s motor shaft is secured at both ends to help reduce vibration and better stabilize its platters.

Dual Actuator Technology – Utilizing dual actuators – one using conventional electromagnetic principles; the other using piezoelectric motion – the head positioning is fine-tuned to increase accuracy. Likely made possible by this is “NoTouch” technology, which assures that the recording head never touches the disk media.

RAFF – Also known as “Rotary Acceleration Feed Forward”, this technology allows the drive to monitor both the linear and rotational vibration of the platters in real-time and compensate where necessary. It’s never ideal to run any mechanical hard drive in an environment where it can vibrate on a regular basis, but the company’s enterprise drives, along with its VelociRaptor drives, can deal with it better than desktop drives.

Extended Thermal Burn-in Testing – WD punishes its enterprise drives like no other, both for their thermal capabilities and endurance. If we saw what went on behind the scenes there, we’d probably want to cuddle our drives afterwards.

800,000 MTBF – At some point, most hard drive manufacturers dropped the “MTBF” (mean-time before failure) rating on their drives. To a point, I can understand why, as it’s a number most people aren’t going to keep in mind. However, WD does include such metrics on its enterprise offerings, such as the Re and Se, and notes that results were achieved through field-testing.

As you can see, WD’s enterprise drives bleed reliability features, with each one working in unison to increase accuracy, stability, and of course, performance.

Speaking of performance, now would be a good time to tackle that, wouldn’t it?