For photo support, the WD TV Live can handle common formats such as JPG and BMP, and as it supports Flickr, you can browse to your heart’s content. From what I can tell, you’re not able to upload any of your photos to your Flickr account through this device, but you can sign into your and browse as you like. In the menu photo below, you can also see that I was listening to music at the same time as browsing photos, which like most things so far, is seamless. 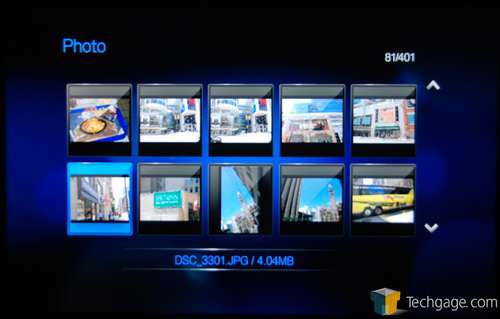 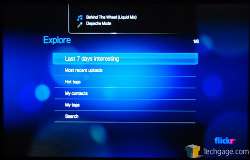 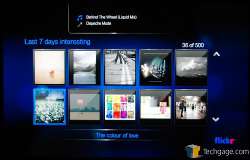 Browsing photos was easy, and for the most part, the performance is good. Some of my photos took a couple of seconds to load, but as they ranged at around the 2MB~6MB mark, it’s no surprise. Photos on Flickr loaded rather fast, but like most devices like this, it’s not quite as fast as viewing them right on your PC.

So what about music? Given the overall pleasurable experience up to this point, I expected it to continue onto the music, and sure enough, there’s a lot to like here. If album art is available, it will be loaded immediately, and in the case of the below photo, which has music purchased off of iTunes, the album art displayed fine as it’s embedded into the file. 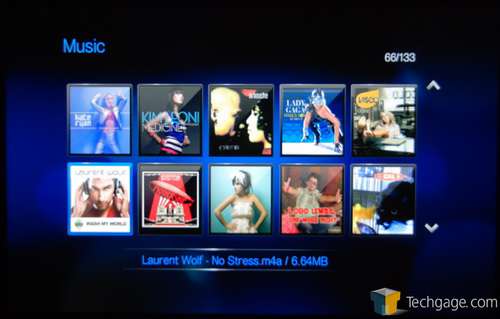 The fact that the album art loaded from iTunes’ files didn’t surprise me too much, but what did was the fact that the WD TV Live also loaded album art for files that didn’t have embedded artwork. Case in point: 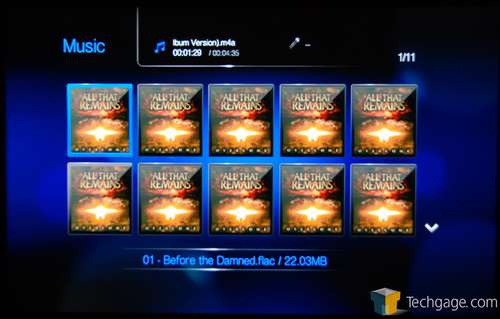 This is an album that I ripped straight to FLAC with dBpoweramp, and no album art is kept in the folder or has even touched these files. Yet, after entering the folder, the art loaded almost immediately. I tested about 20 different albums, and even some of my more obscure stuff loaded album art… quite impressive. I am not sure how it grabs the art, especially so quickly, but it’s a great feature.

Like most of the interface, what you see when playing a song looks good. It doesn’t give you information overload, but just what’s important. 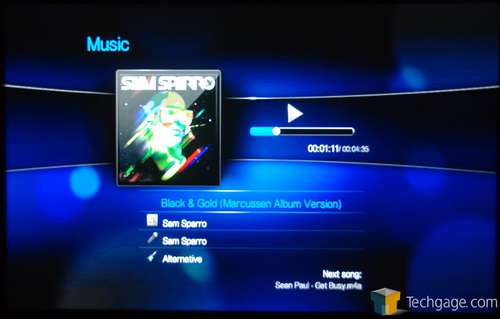 The WD TV Live supports online radio through Live365.com, which offers both a free and paid service. The free service offers about 10 stations, so it’s ultra-limited. If you go “VIP” (paid service), you have a vast collection, but most of what I’ve seen could be easily accessed online for free, from the official websites. I am not quite sure of the purpose of Live365.com except for the convenience factor. I could be wrong, but seeing as most stations I listened to with the VIP trial could be listened to for free on the respective station’s official website, I’m not so sure. 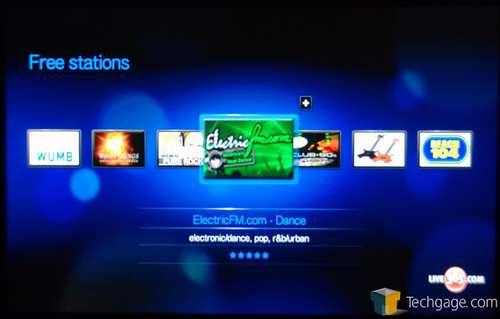 One nice feature is that when you are listening to a station, you can favorite it or thumb it down, or add it to a playlist. I didn’t use this feature long enough to find out just how that works, however. 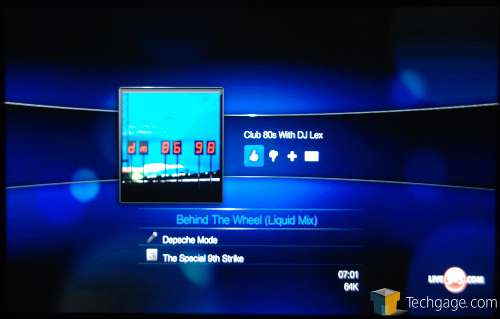 Compared to the interface I saw on the ASUS O!Play, I have to say that what I found here was quite refreshing. The interface as a whole is very responsive and easy on the eyes, and in the end, I couldn’t muster up a single real complaint. If anything, the theme might not appeal to some people, but I liked it quite a bit. It’d be neat if WD could add in a feature to customize the theme in a future revision, since it would help the device cater to an even wider range of people.