Kicking off our hard drive coverage begins with a look at Western Digital’s Caviar Black 1TB. As an affordable “high-end” consumer drive, this model includes all of the important features, and performs quite well throughout all of our tests. It also happens to win the contest for having the lowest overall acoustic levels, and by a fair margin.

For me, building a computer is much more about the details than just the flash. Like most of you, I always try to focus on the fastest CPU, the most memory, and a robust chassis. Build after build, I find my that my tunnel vision keeps my planning aimed at fulfilling these desires. I have even found myself joking aloud, “What else does a PC need in it, anyways?”. Suddenly, a light goes on in my brain and the question, “What about storage?” comes blaring out, demanding an answer.

The one component of the modern PC that has gone through some of the most underwhelming changes over the years has got to be the mechanical hard drive. Other than changes in density, the only other real noticeable innovation to the end-consumer was the switch from IDE to S-ATA. Aside from that, little has changed. Platters still routinely spin around, usually at 7200 RPM, and 10K on high-end drives. So, platters and densities are about the only real internal change to occur over the years, and even that in itself hasn’t delivered anything revolutionary.

With the advent of the home server, with its huge libraries of movies, music, photos and whatever else one can acquire digitally, average consumers are being driven to install bigger and better hard drives into their PC’s. Long gone are the under-100GB drives from everyone’s wish list, and in are the 500GB+ models. Soon enough, I firmly believe that we will evolve even further, and sales will fall on most drives under 1TB (mobile storage excluded for now). Overall, storage is one instance where no one can deny that bigger is better.

That said, we at Techgage are embarking on a new front, storage reviews. It’s been some time since we’ve been able to dedicate enough time to properly test and review storage, whether it be hard drives, solid-state disks, or what-have-you, but we’re pleased to say that things are changing, and you will be able to expect many reviews in the future of both HDDs and SSDs. Though we believe SSDs will become far more commonplace in the future, mechanical storage still has a place in today’s computing, and that’s not likely to change anytime soon. 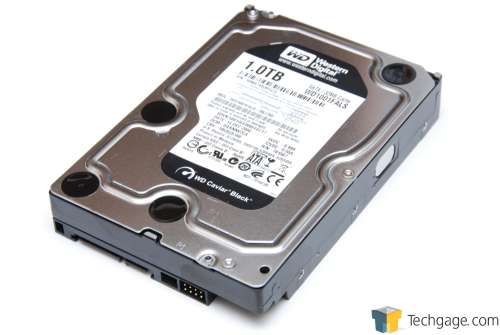 Equipped with a full battery of tests, and a long list of strict procedures, we will be pushing these drives as hard as they can be pushed, which ultimately means that we’ll be delivering the most accurate results possible. Instead of simply guessing which drive you should buy, we hope to give you all of the information you’ll need in order to select the new home for your digital empire.

Today, we start our quest by sampling Western Digital’s 1TB Caviar Black. Admittedly, this drive has been out for a little while, but that doesn’t mean it should prevent us from highlighting whatever there is to know about the drive. We have chosen four other drives of various sizes and speeds for the sake of comparison, and this list will grow as we go on to publish future HDD reviews. All five of these drives were tested, tested and then tested again, and then just once more, to make sure we had enough accurate data in order to satisfy any enthusiast.

As this is our first proper storage review in many years, we’d definitely appreciate some feedback, criticism or not, as it will continue to help us reach our goals of publishing the best content possible.

Before we go into our results, let’s touch up fast on the drive we’re looking at today, the 1TB Caviar Black. At current time, Western Digital offers three “Caviar” lines which are designed for the regular consumer, which it separates with color names. The Black, as you’d expect, is the “bad ass” version, and probably the only option for the enthusiast. Blue is the typical everyday drive, not slow, but not top-of-the-line. Then there’s the Green, which not surprisingly, boasts the best power consumption of the entire line-up.

Though classified as enterprise drives, the VelociRaptor and RE4 drives are good choices for enthusiasts who crave the ultimate in speed or reliability, but a price will have to be paid. The RE4 (RE stands for “RAID Edition”) is most similar to the Caviar Black, but only comes in a 2TB size with a 64MB buffer. It even shares the same power consumption figures. Where it differs is with a few key enterprise-type features, such as “IntelliSeek”, a technology that actively optimizes seek speeds in order to reduce power consumption, RAFF, which monitors things like linear and rotational vibration in real-time, and more.

For those who want a feature-robust drive, or need reliable RAID, but don’t necessarily need the highest speeds, the RE4 drives are a solid choice. For the ultimate in speed, the VelociRaptors is a better one. Thanks to their 10K rotational speeds, the performance is fantastic, at least where mechanical drives are concerned. Though, while VR’s were at one point jaw-dropping, the increasing densities and lower prices of solid-state disks makes choosing one a bit difficult.

Neither of these drives are our focus today, though. Rather, our Caviar Black is, which as mentioned before, is the consumer-level “high-end” drive. That means that it offers better-than-usual performance and features, but won’t break the bank. So, let’s see how it compares to the other drives in our line-up.