Need big storage on the go, but refuse to lug about a full-sized hard drive enclosure? If the term “2TB” sound good to you, then Western Digital’s got you covered. The company recently updated its My Passport line to include the beefiest storage possible in such a small enclosure, so join us as we take a look at just what it’s made of.

When Western Digital first announced its My Passport 2TB, I had to do a double-take. Was I really looking at a 2.5-inch enclosure stuffed with 2,000GB worth of plattery goodness? Yup – the day when you can shove 2TB worth of storage into your pocket has finally come.

With My Passport 2TB, mobile warriors don’t need to sacrifice either physical space in their bag or storage space on their drive. Of course, where big storage / small drive is concerned, there’s always a price premium, and there’s no exception here. Current pricing sets this 2TB model at $199. At ~5300 RPM, it’s comparable to WD’s Green drives on the desktop, which retail for around $125 at the time of writing.

For a product like this, though, a price premium is both expected and justified. As it stands, this is the only 2TB portable hard drive in this form-factor, so if you’re set on the biggest storage in the smallest package, nothing fills the need better than this.

To get a good idea of the size of WD’s latest My Passport, take a look at the photo below, which features a 1TB 2.5″ WD Blue, the 2TB My Passport and a 2TB 3.5″ WD Black. When comparing the desktop drive to the My Passport, which would you rather toss into your bag? 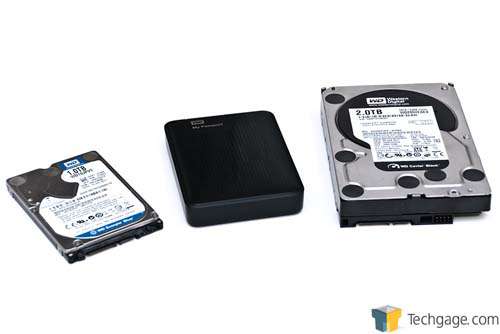 The entire My Passport family includes a USB 3.0 connection, backwards compatible with USB 2.0, which for a massive drive like this is a must. 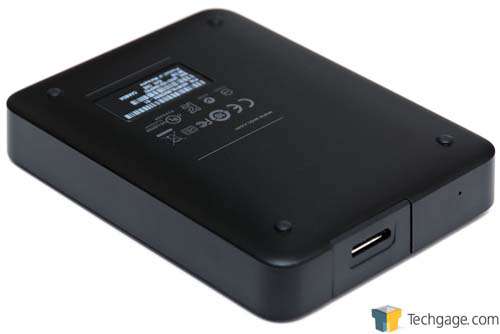 WD’s latest My Passport drives are built well and feature an enclosure that’s not too simple to open – so much in fact, that I couldn’t even figure it out. For the fear of breaking it, I skipped that idea and instead went to WD’s site to find out which drive was underneath. It happens to be the WD20NPVT, a SATA 3Gb/s offering that features 64MB of cache. Its rotational speed is “IntelliPower”, which in effect means ~5300 RPM, similar to the WD Greens.

I should note that while ordinarily, My Passport drives come in a variety of colors, the 2TB model is limited to black for the time-being.

Just like its 2TB desktop companions, the My Passport 2TB settles in at 1.81TB after byte-conversion (2 trillion bytes = 1.818TB). Indeed, there is a ton of space on this little bugger, so let’s check out the software that WD bundles with it and then dive into performance.