To kick off our mobile HDD benching suite, we’ll start with what we consider to be one of the more important tests; real-world transfer speeds. Transferring files and folders on our PCs is about as common as using the PC in itself, so when one hard drive offers better performance than another in this regard, it’s hard to ignore. 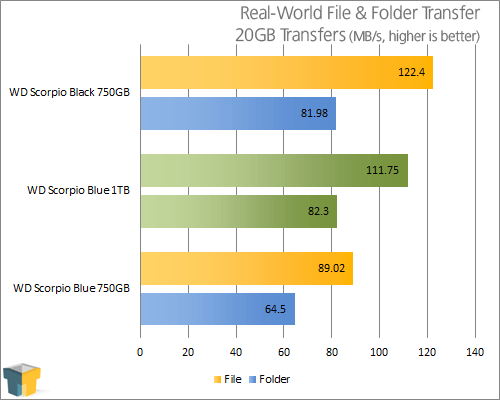 Thanks to its areal density boost, the 1TB Blue performs much better than the 750GB Blue in these tests, despite offering the exact same seek times and rotational speeds.

File and folder transfers are a given for those who use their computers for more than just e-mail, but for some, file archiving is just as common. Be it to save space or to backup a lot of files into a single one, archiving can be as storage-intensive as it is convenient.

To give our drives a proper test, we’ve created a 772MB folder filled with 39,236 highly compressible files, and once compressed, the result is a 142MB .7z archive. To take as much advantage of our test PC as possible, we utilize 7-Zip’s LZMA2 algorithm for compressing, as it’s able to utilize more than half of our available 12 CPU threads most of the time, in return increasing the stress on the hard drive. 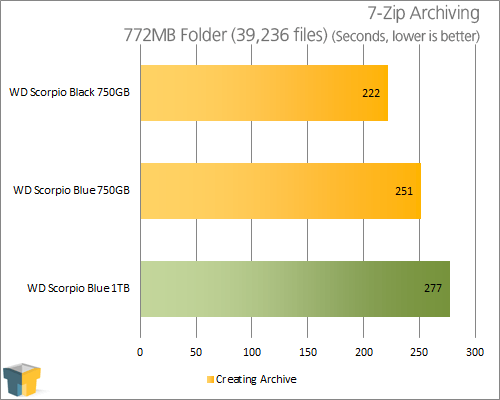 WD’s 1TB drive surpassed the performance of the 750GB in our transfer tests, but the tables turn here, with the 1TB falling to the back of the pack. This chart also gives us a perfect example of how WD’s Black drives compare to the Blue, where the performance boost from the Blue to the Black was about 13%.