For as long as WD’s 10K RPM Raptor (now VelociRaptor) drives have existed, they’ve drawn enthusiasts in thanks to their favorable blend of space and performance. Though popular in the enterprise, 10K RPM hard drives have remained uncontested in the desktop space ever since the launch of the original Raptor, a 36GB model released in 2003.

But with the boon of the solid-state drive, the future for drives like the VelociRaptor became questionable. However, as we can see now, the progression of SSD development isn’t quite as rapid as we thought it’d be, in terms of $ per gigabyte. And when consumers are in need of mass storage, it’s unrealistic to consider a full SSD solution, and that doesn’t look to change for quite some time – if ever.

So what about those who have need for both huge storage and great performance? That’s the segment where WD’s VelociRaptor drives reign supreme – even more so now with a 1TB model. VR drives have always been quite a bit faster than traditional 7,200 RPM hard drives, so with a 1TB option, there’s ample room for those 30GB games and 100GB video projects. 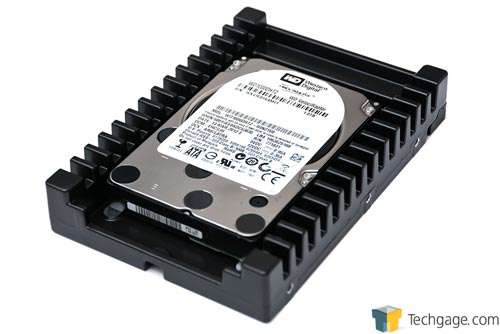 With its latest VR drives, WD has filled a segment it calls “Workstation”. This implies that these aren’t just drives for enthusiasts and gamers, but also the creative professional. As mentioned above, VR drives deliver a great blend of performance, storage space and also price, and the current crop of drives don’t look to change a thing. At the same time, WD has said that in some cases, current VR drives can even out-perform SSDs, thanks to their fine-tuned design.

Compared to the previous generation of drives, the latest models are “more than” 25% faster, and despite it being well-known that hard drives can sometimes buckle under huge loads, WD is confident that its VR drives can stand up to the challenge.

To help gain a better idea of how the latest VR drives compare to WD’s other current offerings, let’s check out this table:

Like most hard drive vendors (a list that is condensing fast), WD doesn’t offer actual performance numbers on the official website. Instead, all we’re told is that the VR utilizes a SATA 6Gbit/s interface – which at this point in time is a given. Instead, we’ll have to figure out those performance numbers for ourselves with the help of our test suite.

It’s sometimes difficult to get specific information as to what sort of change was made to increase performance, but WD promises that all aspects of its VR model has been looked at. The firmware has been fine-tuned to enable excellent read and write speeds across the entire drive and handle huge workloads with ease. And of course, one of the best aspects of VR drives is the focus on reliability, so it’s no surprise to find them equipped with a 5-year warranty (the Caviar Black also belongs to this exclusive club).

With that all covered, let’s move onto a quick look at our testing methodology and then get right into our benchmarking results.