One of the most common tasks that someone will tackle with a storage device is transferring data, so to see what our collection of drives are capable of, we take a collection of solid files and folders and transfer them from our super-fast SATA 6Gbit/s SSD to each hard drives. Then for good measure, we copy a file and folder on the same drive. Both our files and folders come in 4GB and 16GB sizes, with the folders holding between ~5,000 (4GB) and ~20,000 (16GB) files. 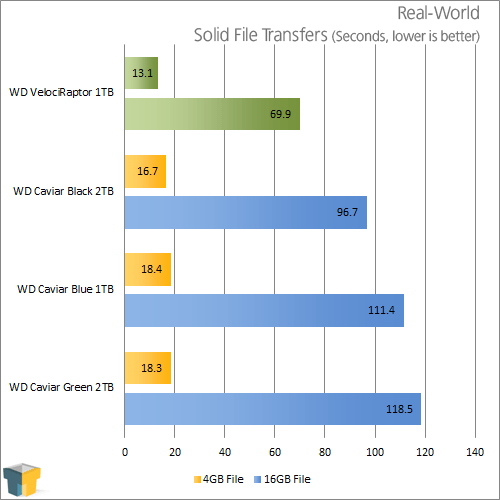 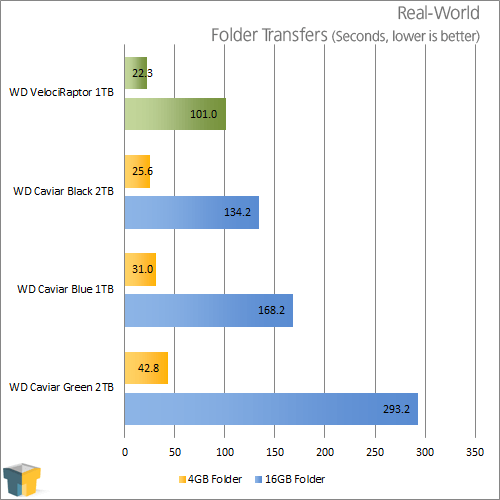 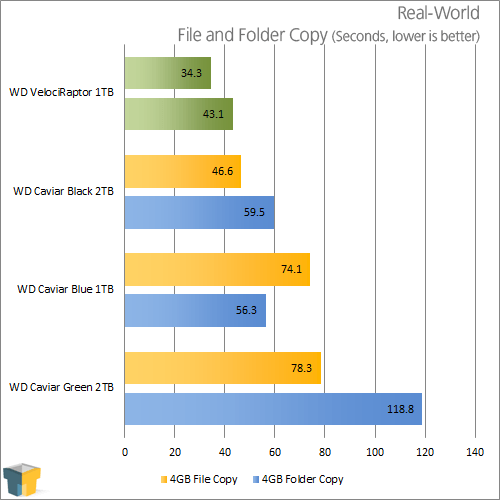 Our AIDA64 write tests showed some odd results between the Caviar Black and Blue, but our real-world results deliver performance much more in line with what we’d expect. The VR drive remains the clear champion.

One of the biggest benefits of faster storage is faster load times for games, both with regards to their startup and level loading. For testing here, we use two of the heaviest games we have on hand; Sid Meier’s Civilization V and Total War: SHOGUN 2. How we benchmark with each game differs. In Civ V, our stopwatch starts as soon as we click the button to load the late-game level (turn 350), and stops the instant we see our map. In SHOGUN 2, we instead record the amount of time it takes to load the entire game, and its built-in 720p benchmark. Our stopwatch starts once we click the benchmark option in Steam’s context menu, and stops the instant we see the level. 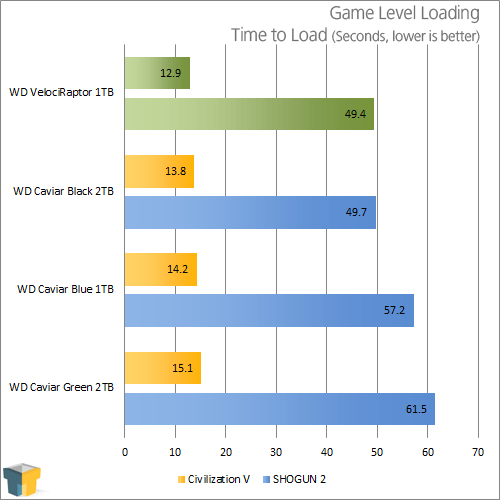 Overall, gaming performance doesn’t look to see a major improvement here, but there are still improvements. Where the increased speed would be appreciated is with actually playing games like these, or playing games where there are are a significant number of textures to be loaded, or a lot of checkpoints.

Like game level loading, faster storage can mean faster OS boot times. To put this to the test, we rely on an Acronis image that has a clean install of Windows 7 Ultimate x64 and required drivers, with Ethernet disabled. For a more accurate result, we do our testing with a cold boot, after the system has been left to sit for a couple of minutes. Our stopwatch starts as soon as the power button is pressed and ends once all of the system tray icons have loaded. 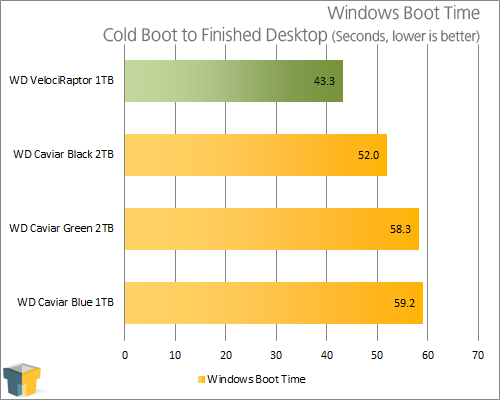 I admit that I didn’t expect much of an improvement here, but I’m glad I didn’t bet on it. The VR drive shaved almost 9 seconds off the boot time of the Caviar Black, and compared to the Green and Blue, there’s just no comparison.