It seems that nearly every week there comes an announcement of the newest SSD (Solid State Disk) to be set upon the consumer. No one can deny the raw speed of these drives and with ever changing controller technologies they are even seen as quite reliable. In fact, if it were not for two rather outstanding factors, I feel the world would quickly put mechanical storage to rest.

The first is still the Achilles heel which is price, with even the most basic drive still commanding $3+ per GB of storage. Second, density still has yet to breach the 500GB mark and that is just not going to draw in those who store music and video on their PC as well as any other data farmer.

Mechanical drives have been around since the early days of the PC. Slowly but surely they are creeping up in size without doing the same in cost. With even the most expensive drives coming in under $1.50 per GB, they are still far more affordable. Also, considering the fact that manufacturers are stuffing over 2TB of space onto a single 3.5â€ drive, no one can deny who has won the density war.

I have been asked more than a few times as to my opinion on the future for mechanical hard drives. I feel that until SSD’s come in under $2 per GB and offer at least 500GB of density to the typical consumer, they will remain of little interest to the mass market. I am sure there are going to be enthusiasts everywhere screaming blasphemy, but they also must remember that the enthusiast market is still under 10% of the entire market for PCs and peripherals. A segment that small is just not going to get priority, and if you ask me, the enthusiast has been a willing guinea pig eagerly buying up â€œbetaâ€ drives that initially were nearly failures. 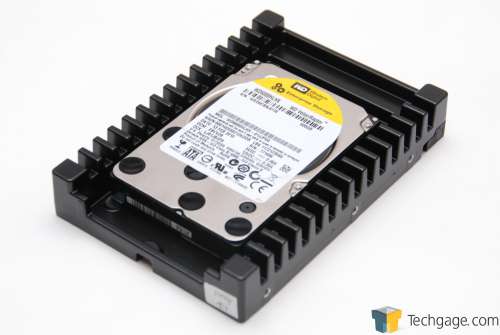 Western Digital is also still confident in the current state of mechanical storage. After many successes with the initial Raptor line it released the current VelociRaptor line to take the brand even further into the future. With two offerings utilizing the new SATA 3.0 bus offering 450GB and 600GB of density, it is obvious that the company is not worried about the venerable mechanical drive disappearing any time soon. I will be one of the first to state that the gains running the newest SATA specs are minimal and aimed more towards SSD’s, but that does not mean drive manufacturers should run on older bus specs.

The VelociRaptor line is classified by WD as part of the Enterprise Storage family of drives which also compromised of their SAS and RE (RAID Edition) lines. Another VERY important consideration is the 5 year warranty given with these drives, as well as 1.4 million hours MTBF (Mean Time Before Failure). Cache has been increased to 32MB for improved performance, and has been a long-time coming. Without question, speed and reliability are the main focus in this class of drives. Pricing has also been addressed as the price of the 600GB model is $279.99US, meaning the 450GB model will be that much more affordable when it becomes available.