Although I was skeptical, I had a good deal of fun with the game. While it’s no Pro Skater, it was a refreshing version that proved to be a good sidedish alongside the main course of Project 8. Although the control wasn’t perfect, it wasn’t completely bad either. There were only a couple times that I messed up during a race due to controls, and while it was a downer, it didn’t happen that often.

There are an ample amount of levels available, in addition to the race modes. Even after completing the game with one character, there is a fair amount of replayability.

I do wish the trick system was more in-depth, however. It’s very basic, and there’s no real reason to learn how to perform a certain one. Just randomly tap buttons while in the air and you will bust off a huge combo. Sadly, there is no manual mode in the game. That would have added a lot to the trick system because there are many opportunities where manual is possible to pull off with ease. 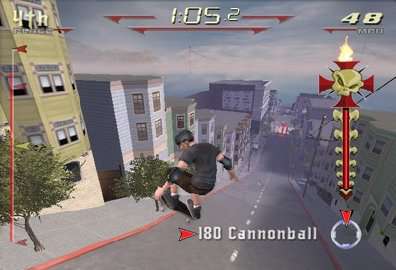 The trick system is another area where I found a problem with the controls as well. Once I learned how to do simple tricks, such as flips, the controller would not -always- react to what I’m doing. To flip, you just tilt the remote forward and push the 2 button. Simple enough, but sometimes I had to repeat this 3 or 4 times before the character would actually perform it.

More depth would have been quite welcome. After beating the game, there is little reason to go back through unless you find yourself addicted. There are virtually no collectibles to find… you simply unlock some as you progress through with different skaters. There are a slew of videos to unlock, but most are the ingame videos you will see before each race. Boring after you’ve seen them once.

Tony Hawk games have always been known for their killer soundtrack and this one is no different. You will find a full roundup of genres, but mostly punk. The Bouncing Souls, Left Alone, Anti-Flag and Motorhead can be found here, among 30+ others. It’s a good mix and should keep things interesting as you skate through the game. 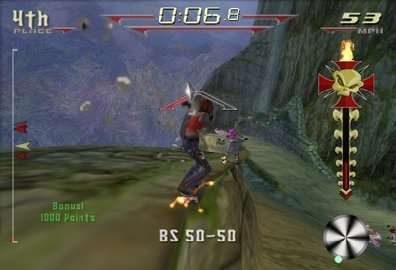 The sound production value is not that high either. The sound effects are decent, and the characters are fun to listen to. As you race down a hill and get close to an opponent, they will holler at you. Your board rolling along pavement and kick flipping off a stop sign… it’s on par with the other games in the series.

Overall, this doesn’t feel like a “next-gen” game, even graphics aside. It’s presentation feels like a game that was originally developed for the Nintendo DS, then ported to the Wii. Despite that fact, it was still a fun game. If you enjoy SSX and Tony Hawk, then you will enjoy this game. If you are not a fan of either, you will probably want to stay away. I am awarding Tony Hawk’s Downhill Jam a 74%.