by Rob Williams on November 6, 2012 in Software

As difficult as it may be to tell sometimes, Windows 8 does in fact offer a lot to love. I’ve already had my say about what frustrates me with the OS, so now, I’m taking a look at the other side of the coin. What is it that makes Windows 8 pleasant to use? Select highlights include aesthetic improvements, the improved transfer dialog and the new syncing capabilities.

This is an odd inclusion, I admit, but as it’s a rare day when I’m prompted to talk about Office at all, it’s best to do it now. But note – all of what I’m talking about here applies to Office 2003 under Windows 7 as well.

When I first opened Office 2013, I felt a little overwhelmed. It’s of course optimized for a touch device, but it wasn’t those enhancements that struck me. It just felt quite a bit different. After some use, however, I ended up enjoying the latest version a lot, and it boils down mostly to aesthetics once again. 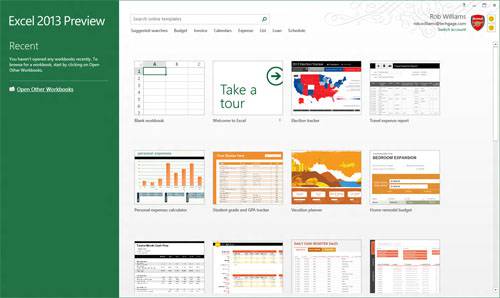 As “big” an upgrade as Office 2007 was to 2003, Office 2013 makes that seem like no upgrade at all. The entire interface has been revised, and now the program can tie in with your Microsoft account, much like Windows itself. On the surface, Office 2013 simply looks good. When you open a program like Excel or Word, you are quickly greeted to a list of your recent documents and an online template collection to peruse and search.

Then there’s the fact that Microsoft has finally done away with the draconian dialog option boxes that allow you to tweak settings for an object in your document. Now, as you can see below, the same options now expand from the right, improving the look and feel significantly, and also the usability. 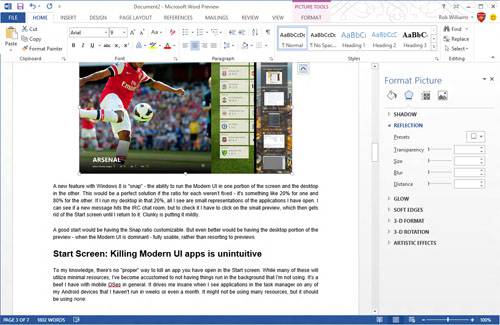 The most noticeable difference between 2013 and all previous versions of Office, though, is the amount of effort Microsoft put in to making the experience as pleasant as possible. Movements in documents are made fluid, transitions are added where they fit well, and even the moving marquee of a selection is now smooth as silk. All-in-all, no single thing here makes Office 2013 a “must-have”, but as a long-time user of Office, the enhancements here actually would cause me to upgrade.

If you’re a heavy Office user, I highly recommend checking out this Wikipedia page that does a great job of summing up all that’s new.

Your Uptime is Easy to Find

In an article of things I “love” about Windows 8, this choice is no doubt going to come off as ridiculous – and it is. Well, ridiculous in the regard that this “feature” should have been made available long ago. In Linux, finding your PC’s uptime is simple. You load up a command prompt and type in “uptime”. In Windows, it’s required some deep digging, or a program that takes the hassle out of it for you, such as AIDA64. 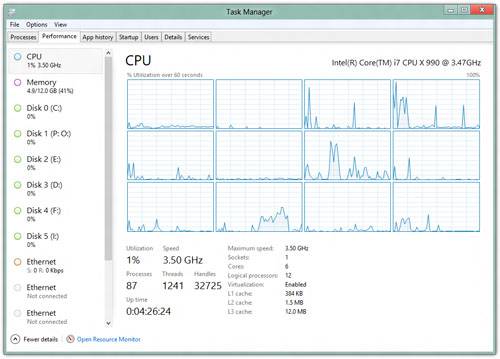 In Windows 8 though, the information is found right in the task manager, where it should be. Microsoft didn’t stop there, either. Also listed here are the number of running processes and their threads/handles, along with other neat information like your CPU cache levels. The only thing that could make this particular screen any better is the addition of system temperatures. Maybe in Windows 9?

Yet another feature inspired by touchscreens that I actually happen to like on the desktop is the prompt that comes up when you either insert media, or try to play a file after a new application has been installed. This design is similar to Android, where after you install a new media player, for example, opening a video will prompt you to choose a default. Except here, if you don’t want to open it with a program, you can simply have it open up as a folder instead. 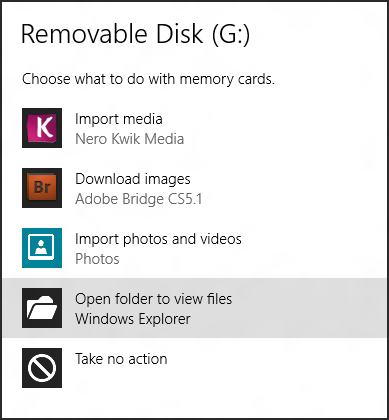 The reason I like this simple feature so much is that I’ve had seriously stubborn programs in the past insist on being a default for something. Adobe Lightroom, for example, insisted on loading up every time I plugged in a memory card, which is not the action I would have otherwise taken. Because of Adobe’s corner-cutting, the fix wasn’t in the program itself, but rather in the control panel under program associations. This implementation in Windows 8 makes fixing a problem like this much easier.

Everything and the Kitchen Sync

With that nonsensical title out of the way, syncing is another feature that’s quite nice in Windows 8, and great if you happen to live in the Microsoft ecosystem. For actual data, there’s SkyDrive. Anything copied to your SkyDrive folder will automatically sync to the cloud and become available on any device that has a Web browser or SkyDrive app. Use Outlook? The Windows Calendar? Contacts? This will all be synced to the cloud as well. 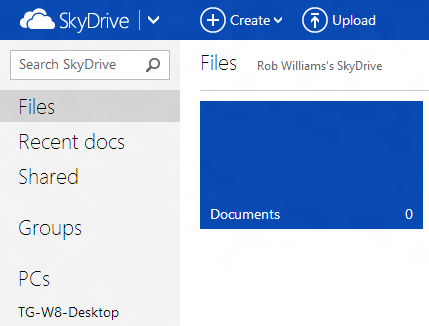 This level of convenience isn’t something new, but it’s still incredible at its heart. You could install Windows 8 to a second computer, and just by using the same login, you’d immediately gain access to every piece of data that streams through Microsoft’s cloud services. As someone personally tied into Google’s many services, Microsoft’s integration here doesn’t affect me too much, but it’s the feature that counts.

A Realistic Windows Experience on a Tablet

For an OS as blatantly inspired by tablets as Windows 8 is, it’s good to know that it does behave quite well on them. This is important, because many people have required the use of Windows tablets since well before the original iPad existed, but sexy solutions like what we have today just didn’t exist. But today, we can walk around with 10-inch or less tablets and have a full Windows install at our disposal. While we might not all need that, for those who do, this is awesome. 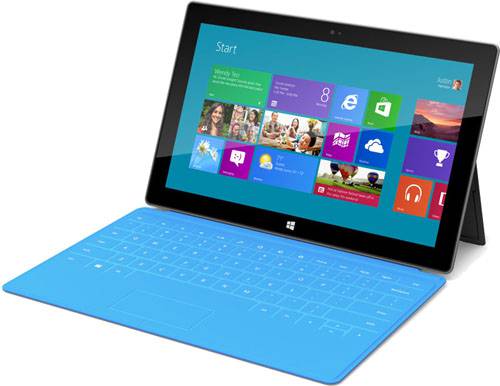 The biggest difference between a product like Microsoft Surface (pictured above) and other tablets, Android or iOS, is that Windows is a full-blown OS. The OS is the same on the desktop as it is on the tablet, so your limitations are no longer the OS, but the hardware – which, up to this point, is pretty decent (ARM limitations aside).

A counter-argument to all of this is that some people don’t need a full-blown OS on their tablet. Then there’s the fact that Microsoft’s store at the moment really isn’t too stellar, especially in comparison to Play Store or App Store. Still, this is a great solution to have available, and we can only hope that Microsoft’s mobile marketplace will grow and become better over time. The road ahead is long, especially with Android and iOS having been established in the market for so long.

So, there you have it. You now know not only what I hate about the OS, but also what I love about it. So at the end of the day, do I recommend Windows 8? And if so, who for?

That’s a tough question to answer. While I’m pleased with Windows 8 overall, and have no intention to drop it, there’s nothing here that I’d consider a “must-have”. With Windows Vista, the allure boiled down to the fact that Windows XP was an aging OS, and I wanted something more modern. There was also the promise of cool DX10 games. Well, we all know that Vista was a true chore to use for the first couple of years, which became the allure for the next OS, 7. At the time of 7’s launch, I am not even sure I cared about what it offered. I just hoped it was more stable than Vista. Thankfully, it certainly was.

In fact, Windows 7 is so good, that it becomes the reason most people don’t need to upgrade to 8. Unlike Vista and 7 which brought exclusive DirectX versions, 8 does not. That may change in the future, but with the install-base 7 has, I have doubts Microsoft will pull that trick for this generation.

For me, what makes me prefer Windows 8 over 7 are the aesthetic improvements, niceties such as the program associator, improved transfer dialog and improved Task Manager and its slight performance boost. While there is some bad to deal with, it hasn’t overshadowed my experience. I’ve now been using the OS for well over two weeks, and so far I haven’t run into a roadblock or anything so inconvenient that it’s truly stuck out.

If you’re on a version of Windows older than 7, upgrading is really going to be worth it. If you’re on 7, I’d say stick with it, unless you like all of what you’ve seen here. You certainly don’t “need” it, but it’s a nice upgrade nonetheless.