When Microsoft develops a major software product, the entire world knows about it. Vista is one of the few products that has ever received this much attention, but it’s for good reason. Windows is the leading OS on the market, which leads to many people dependent on it to be a standout product. Since the first incarnation of Longhorn in 2002, the OS has made numerous alterations and cuts, namely WinFS.

In early Alphas of Longhorn, it merely resembled Windows XP with a gray skin. Since that time though, things have changed drastically, and Vista Beta 2 is nothing like the system was even two years ago. The original goals are still there, but since that time, more have been added.

One thing that each new beta of Vista has proven well to do, is become more system intensive than the last. The Aero Glass feature alone can be responsible for eating up over 100MB of ram. The OS in general is quite bulky, especially the Ultimate, which makes people wonder how they are supposed to run it at release. After a fresh WinXP install, you can usually expect near 30 processes to be running, but in Vista, that number skyrockets to 40+. Not only are there more processes though, but each one takes a significant amount of ram. 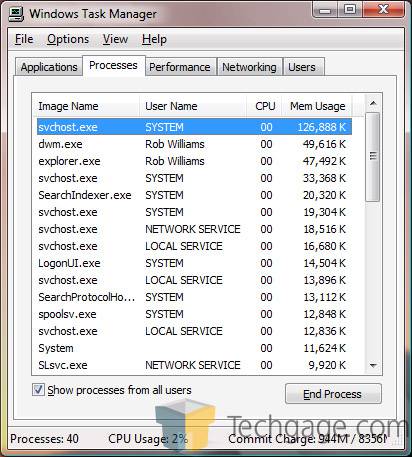 In the picture above, you can see the processes after I closed everything I didn’t need. The DWM.exe is what’s responsible for the desktop windows, which takes a lovely 50MB by itself. If you turn off the Aero Glass theme, that figure goes down to below 10MB.

While this doesn’t seem like a big deal in the grand scheme of things, it isn’t. However, when you want to get into system intensive applications, it may be. Microsoft is already recommending no less than 1GB for use with Vista, and I personally wouldn’t recommend anything under 2GB if you plan to be doing any gaming. As mentioned in our 4GB memory article last month, companies like OCZ are readying themselves to release 4GB kits of ram. So, it’s not hard to understand that Vista is gearing up to require a very beefy machine.

Not only will the OS test your memory and CPU, it will also require a good video card that supports DX9. Simply running Fraps in Vista will tell you that the entire environment is being rendered, because it actually will keep a FPS counter in the corner, as it would in a game. Do we really need to go to an accelerated environment for an operating system though? I am doubtful, but it sure does look pretty.

I have been planning to run these benchmarks for a while, but had to pick the right time. Since Microsoft has released a public beta of Vista, I feel that means that they are confident enough of it’s quality. Would they release a beta that has -so- many bugs on purpose? Of course, take a look at their retail programs. Either way though, all of these benchmarks are not to be taken that seriously, because this is still a beta. In the next four or five months that they take to iron out the last bugs, anything could happen. As it stands though, this is what you can expect performance wise from Vista.

Before I jump into the testing results, I will explain a few problems that I ran into. There were a few benchmarks that I had wanted to include in this report, but they simply would not run in Vista, even after changing it’s compatibility option. One program was ACDSee, which I wanted to use to resize and convert a mass amount of files at once, but the program just simply would not run.

Another problematic application was Sandra 2007, although it’s 2005 version gave the same issues. The program would install in the 32-Bit version of Vista, with a little trouble, but ran fine afterwards. In the 64-Bit version, it would always install fine, but it would never actually load any of the modules it was supposed to. I had tried re-installing it around 5 times using different installation options, but it simply would not load. This is not due to the version of the program, because a standard install of Sandra includes support for both 32-Bit and 64-Bit. 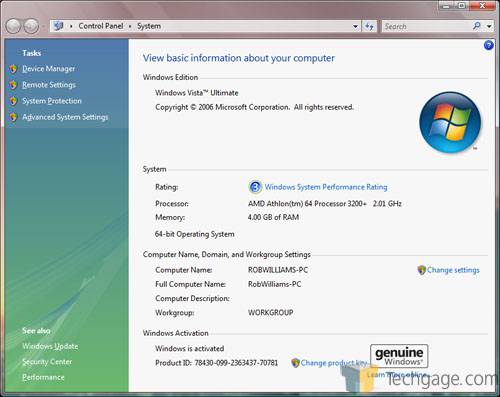 Everest also gave some various problems, namely a BSOD (Blue Screen of Death) when running memory benchmarks. The settings were fine for the memory though, and this was the only program to cause such an issue. BSOD’s in Vista run through very quickly compared to XP ones, so you barely have time to read the error.

Surprisingly, installing the games didn’t prove much of a problem. However, with Battlefield 2, it was more difficult to load a level than in the 32-Bit version. When loading the level, the application would simply drop. It took 7 times to load the level I needed to benchmark, which is a tad ridiculous.

Serious Sam 2 ran perfectly, though the opening game movies would not load. I could hear the sound, but see no video.

Overall, there were many problems to be had, most of which took an entire day out of my weekend, but what fun would it be if it went smoothly?