If your computer is a workstation, then Cinebench is a great reference benchmark. The faster your CPU can render the image, the higher the score. The 64-Bit version of the program was used under the 64-Bit OS’, and made a very noticeable difference. Between Vista and x64 though, the performance difference is rather minute. 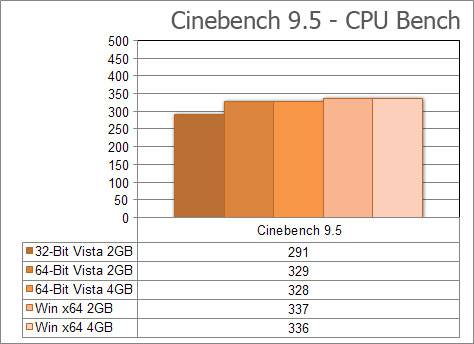 Super Pi calculates a specified about of digits past the decimal place. In our case, I ran the 8 Million test, which turned out to be in x64’s favor. Overall, x64 shaved 12 seconds off what the 64-Bit version of Vista could do. For minor multi-media benchmarking, I used Nero Recode to recompress a DVD video. I first extracted the video, in this case “Bad Religion – Live At The Palladium”, and used Recode to compress it so that it could be burned to a standard 4.5GB DVD.

The results are odd here. There was a huge hike in 64-Bit Vista with 2GB, but that didn’t happen with 4GB installed. In the end, x64 proved to compress the video more than 2 minutes faster than Vista. 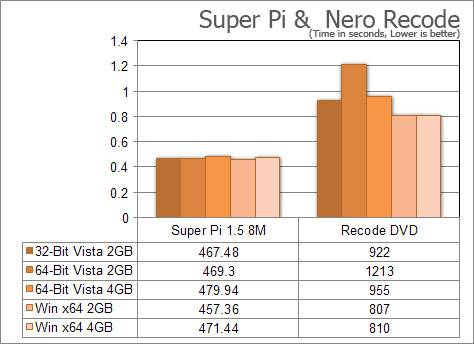 The 32-Bit version of Sciencemark was used through all the benchmarks, due to the 64-Bit one giving very inaccurate results regardless of current OS. While the Cipher benchmark didn’t sway in either OS’ favor, the Moldyn is another story. Under the x64 install, it proved near 50% faster than Vista. Not a small difference! 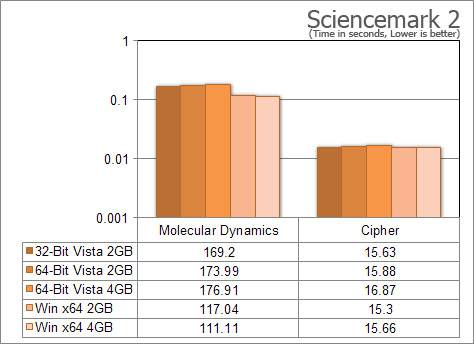 For the last of our CPU benches, I used EVEREST 2.80 Ultimate Edition. The differences are once again minor, although x64 comes out in top overall. 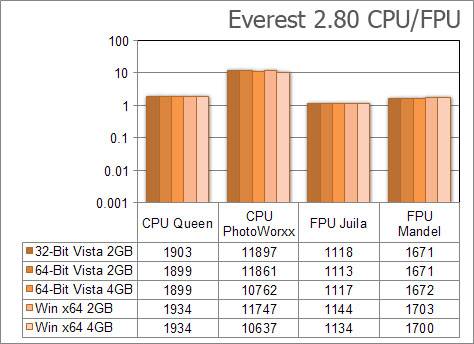 Overall, we can see that CPU wise, Vista can really hold back your PC. Though it does exceed x64 in some respects, it falls short more often than not. Let’s see how Vista handles our RAM and hard drives.