Will using Vista put a damper on your gaming addiction? When we took a look at Beta 2 this past summer, we saw rather large performance decreases. Now that Vista is finally out, have things been improved?

Gaming. Pastime for some, necessity for others. Yes, gaming is an integral part of everyday life on the PC and Vista promises to be a great OS for the job. Ignoring the fact of future DX10 games, does Vista prove to be a gaming friendly PC today?

I spent a lot of time in Vista Beta 2 last summer and wrote the first part to my performance reports. In that article, I compared both the performance of system benchmarks in addition to games. Needless to say, nobody in the end was impressed with the results. Those doubts could rightfully be pushed aside though, since it was “Beta” operating system we were dealing with. At that time though, it showed us clear as day how far Vista had to go.

I’ve said it many times over during the past week, but the final release of Vista (RTM, Build 6000) is far better than what we saw in Beta 2. The performance in general is smoother and a lot of applications work without crashing. It’s really no comparison, Beta 2 was as bug ridden as they come when compared to RTM. That said, it’s not all fun and games. It still has a good deal of annoyances to deal with.

Last week, I posted an article similar to this, except there I dealt strictly with system performance. As a whole, there was not too much to be upset with. Vista did prove slower than XP in the end, but the differences were very minor. From this article, we received a lot of good comments (and criticism) about the testing and recommendations for other tests. I will likely follow-up to that article in the coming weeks, as some of the ideas given to me should indeed be touched on, such as network and GUI performance.

One common question I have seen asked was, “How come Vista is not faster than XP? It should be, as it’s newer.” Well, this is not always the case. There’s no denying that Vista is a far much more system intensive than XP was. It’s even a bigger jump than was 98 to XP was. It doesn’t help that the entire Vista environment is accelerated, so it first requires a lot more GPU power than what XP did, not to mention memory. Taking a look at all things considered, I’m actually surprised that the benchmark results were as good as they were.

That said, don’t run out to pick up Vista and expect a big difference with your computing experience. Personally, I am not a huge fan of Vista, simply because I’ve run into many bugs that I should have not existed. In the past two months that I’ve been using the RTM, I’ve had the file manager stall during it’s operation, Paint crashed a few times, even the sidebar crashed. Other more intrusive bugs included a corrupt GUI, which always fixed itself after a few minutes. I won’t mention the difficulty of trying to get Vista to connect to my Wireless network, although XP does it just fine. Oops!

But, we are not here to discuss the problems that Vista has, instead we are taking a look at gaming performances. So let’s get to ‘er.

For todays testing I will be using NVIDIAs latest 100.54 drivers, which will be available publicly tomorrow. These drivers have a slew of bugfixes and other improvements over the previous ones and include support for all recent cards, including G80. SLI is not yet possible however. Luckily, it will not be that long of a wait. NVIDIA noted that SLI support for G80 should be possible in the coming week. G70 SLI support will have to wait a little longer though… possibly 3 – 4 weeks from now. SLI will only support DX9, which is ok since DX10 is not exactly abundant right now.

All testing was completed on a fresh computer with an XP Professional and Vista Ultimate install. No real tweaking was done with either OS, except a quick defrag before the testing session began. The only service disabled on either OS before testing was Diskeeper. Everything else was left in tact, to better represent normal computer circumstances.

I have chosen to use a select number of games as well as the 3D Marks. To gather results from the gaming, Fraps 2.8.2 was used to give us the minimum and average FPS. All settings used for each specific game will be mentioned below.

I decided to use Half-Life 2 for a number of reasons. First, it’s a great game and I love it. Second, it’s not just a good test for GPU stressing in general, but it benefits from good hardware such as CPU and memory. It’s also one of the most finicky games out there. If you have something wrong with your computer whether it be a bad overclock or less-than-perfect driver, you will know about it very quickly. The settings used here were all maxed, with 4xAA. 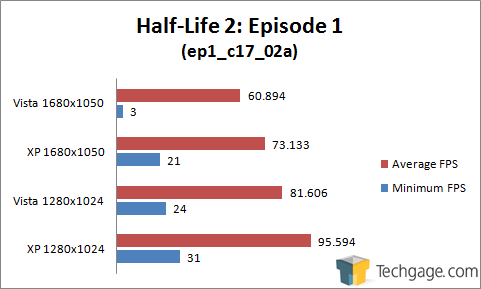 Before even getting into the graph, I can say right away that this is one game that didn’t feel right in Vista at all. The game ran slow and halted randomly throughout gameplay. I had no such experience under XP.

Now looking at the graph, 1680×1050 specifically, we can see HL2 proved ~13 FPS slower than XP. Since the game in general was not as smooth as it was on XP, I’m surprised that the results were that high. The thing was, it ran fine for the most part, but the gameplay experience was dampened with these random stalls. That 3 FPS minimum you see was the result of the biggest halt during that benching run.

CoD 2 is a great game for benching because it’s rather intense on your system even without realising it. That’s why we see 28.472 average FPS on a nice mainstream video card. Settings used here were default except AA which was changed to 4x and AF which was set to Anisotropic. 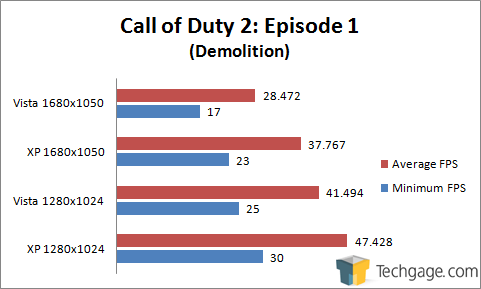 Although there is a noticeable decrease in frame rate here, it didn’t feel as sluggish as Half-Life 2 did. However, 1680×1050 was clearly not as smooth as it was on XP, but it wasn’t so noticeable that it would keep you from playing. Still, a 9 FPS decrease at the same settings between both OS’ is a rather large difference.