Will using Vista put a damper on your gaming addiction? When we took a look at Beta 2 this past summer, we saw rather large performance decreases. Now that Vista is finally out, have things been improved?


The previous games were tested using two resolutions just to see if the scaling was congruent, which it was. For our last gaming test, I took Quake IV, Ghost Recon: Advanced Warfighter and Oblivion and put them through the paces to see if they experience any decrease in performance. Quake IV and Oblivion were tested using 1680×1050 while GRAW used 1280×1024 since my 7900GT wouldn’t allow anything higher. 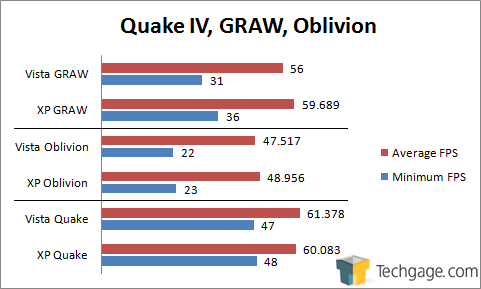 Here is what I like to see… not much difference at all. Granted, there are indeed decreases, but they are rather minor. The biggest difference was the minimum FPS experienced with GRAW… 5 FPS between them.

I’m not a particular fan of the 3D Marks, because they are generally more for fun than to gather performance results. However, using each of the versions in both XP and Vista should show whether or not there are immediate differences in performance using different DirectX versions. 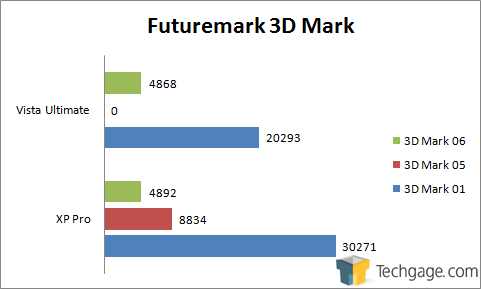 One thing you will notice is that 3D Mark 05 has a 0 for Vista… which is the case because I ran into a few problems. First, opening the program automatically changed my desktop theme from Aero to Basic. Second, the test ran but once it was over it didn’t deliver a score!

3D Mark 06 doesn’t show much of a difference at all, which is due to the fact that it was recently patched with updates to better support Vista. When we take a look at 3D Mark 01, the difference is 50% better in XPs favor. This shows that Vista may not be so great at handling older games which 01 is representative of, but you don’t generally need a super-high ’01 score to play those games fine, regardless.

As with most articles of this nature, we can’t fully give a conclusion because so many factors come into play. Though as it stands, we can learn a lot from this simple round of tests. First is the fact that Vista is not going to be an OS for an ultimate gaming machine anytime soon. This is something that you should consider before you throw a bunch of cash at a new computer and then pick up Vista along with it.

The Vista NVIDIA drivers used during testing were just finalized the other day, the result of a string of tireless days of bug smashing. Vista is not necessarily a harder OS to develop for, but because coders need to learn the new architecture, we can expect to wait a while before our PCs are “perfect”. Even with these “final” drivers, SLI is still inoperable and may not be for another few weeks. Even at that time, nobody is going to know whether it’s going to equal the performance we currently see on XP. Even with my simple one card testing, we can see there is a lot of work to be done, both with the drivers and perhaps with games developers releasing updates that better support Vista.

So, I’ve said it before and will say it again. Vista is a good operating system… but it’s -far- from being even 90% reliable. When going from an XP machine to Vista, it feels like you just went from a Toyota Celica to a Ferrari 599 GTB Fiorano. The only problem is, that it feels like your new Ferrari borrowed your Celicas engine. We’ll let the numbers speak for themselves.

In the end, if you are making the move to Vista and are a gamer, you may as well prepare to partition your hard drive to dual boot. You are not going to want to go through the hassle of making your games run smooth in Vista, or go through the trouble of tweaking to make it happen. Hopefully within the next two months, NVIDIAs drivers will be much more refined and -all- games should run as they do on XP, or at least close to it. I regret not having an ATI card on hand to perform testing there as well, but it may not be a far stretch to expect a similar experience there.

Addendum: An unregistered poster in our forums made this comment: “Microsoft stripped DirectSound and DirectSound 3D from Vista, meaning that there is no hardware audio in any DirectSound game. No fancy effects or even surround sound. Just plain old stereo. I don’t know why they did it, but there you have it.”

I forgot to make mention of this, but its true. OpenAL is the primary sound technology used in Vista, so future games released will have this support. For games that lack this OpenAL support, companies like Creative will be releasing special drivers that will convert all DirectSound 3D to OpenAL so that it can be used appropriately. It’s clunky, but its better than nothing. This is another good reason that Vista is not the right OS for current gaming.