Madden is back for its 17th installment and we are promised the richest experience yet. This time around we have the addition of Lead Blocker control, hall of fame mode, run like the players and a more feature-rich franchise mode.

Sometimes the computer is too easy and to have someone step up and threaten your perfect franchise record can really get your heart pumping. While these features are nice, I am left uneasy at the omission of online leagues or fantasy draft leagues. I don’t think I am in the minority in having a large amount of my friends play Madden as well. We could get together and play in an online league, have a draft and compete against each other in a structured setup. This isn’t a huge deal but it is something that I think would bring a lot to the game’s online attractiveness.

We have covered the play and the graphics, but how does it sound? Once again, there are many highs but almost as many lows. The broadcasters get old after a few games, as they do in all sports games, and by the end of my first season, I just learned to tune them out. Where the sounds truly shine is during game play. You hear the players fighting each other. You hear the stomps of their feet and the trash talking that the players exchange with each other before and after each play. It’s the small things like the trash talking that both add to the realism of the game but also get hokey after time as well. 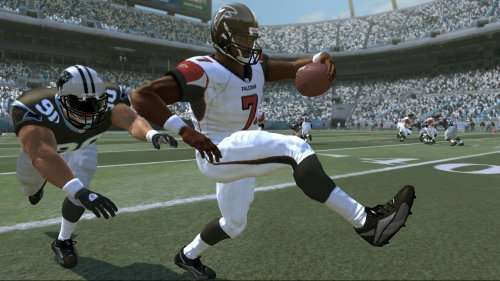 Madden ’07 is a mixed bag of good and bad. When playing any Madden game, you know what you are playing. The Madden franchise has been around for quite a long time now and with each year’s passing, the game improves on issues and sometimes looses some things as well. The game graphically looks better than any version before it. When playing on a HDTV, the game truly shines. Just as any sports game, there isn’t any person that I know that would not rather play it with their friends. I know we get together and play Madden during the football season a lot.

We play it on the way to the game in the car, we play it at home when the Colts are playing an away game and we play it during the week when we have to feed our NFL addiction. If you are like me, Madden games are a must buy for all football fans. Sports games have the advantage of being able to come out every year with little more than roster changes in new packaging. For the most part, Madden ’07 feels a lot like last years but improves on it overall.

One thing that I think would kick start EA into releasing the Madden that we all want is to do away with the ‘silly’ NFL deal that says that they are the only company that can make an officially licensed NFL game. BRING BACK THE 2K LINEUP! Competition benefits us all and is used to make EA tighten up their games. Now they don’t have to do that. The Superstar mode of ’07 is the highlight of this game but it does not make it perfect.

All in all, I am giving EA Sport’s Madden 2007 a 76%. While 07 isn’t perfect, a few pick up games with friends or online is just the play coach called during this years NFL season.