One of the most popular racing franchises is back with their thirteenth installment. The game takes the best of “Underground” and “Most Wanted” to deliver an exhilarating experience.

EA has been faithful to their Need for Speed series over the years. There’s no doubt that its travelled a long road, and easily has become a stature for the racing genre. Carbon is the thirteenth version from the series, not counting the two special titles for the PSP. Luckily for fans, they have not really delivered a poor version yet. Unless you want to count Motor City which didn’t too well.

Carbon is a mix of what we’ve already seen in Most Wanted and Underground. In Underground 1 and 2, EA made the debut for Drafting and “underground” street racing. For the first time, the entire game took place at night. Clearly, illegal street racers would not race in rush hour traffic. One reason Underground was such a great game though was the fact that there was one level… an expansive city. Most Wanted had similar gameplay, but added a few key features.

Cops! We had only previously seen cops in Hot Pursuit 1 and 2, but MW brought them back with opened arms. They played a huge role, and were undoubtedly one of the more difficult parts of the game.

Take both those games, combine them, and we have Carbon.

Like the past couple games, Carbon takes place in a single city, Palmont. Your backstory is simple. There was an incident. You left town. You returned. You get together with your crew and bust up the streets to come out on top. After conquering all four districts that the game offers, you will face up with Darius, who may very well have the worst looking jacket I’ve ever seen. That aside though, the story is not a leap from anything we’ve seen before. This game proves to have more aggressive characters though, who mean business. Or at least try to. 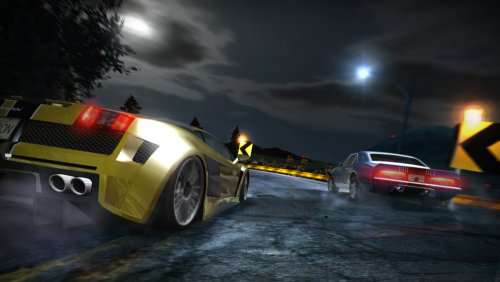 One of the biggest features of the game is that there are three different car classes. Depending on your style, you can choose Tuner, Exotic or Muscle. Sticking with tradition, I first completed the game with mostly Tuner cars, but moved to Exotics when the added speed was needed. As you would expect, each class handles differently, but all are very fast. Each class is better for various types of races. Don’t plan on drifting with a Lamborghini Murcielago… it’s just way too fast for such a tight track. Muscle cars proved the most difficult to play, in my opinion, due to their control. It’s what you’d expect of such cars though.

In terms of manufacturers, most of the ones you’d expect are here. They include Dodge, Ford, Lamborghini, Chevrolet, Lotus and Porsche. Some of the lesser known foreign cars are also included, such as the Alfa Rameo Brera and Koenigsegg CCX.

Progressing through the game is a simple matter of completing race after race… standard fare. Speedtrap and Checkpoint races have made a return, to break of the tedium of standard racing. There are also new races called Race Wars, which are hard. These have 20 cars total, and take about 5 minutes to finish. In order to place first, you will need to learn the specific track very well, because any mistake may cost you. 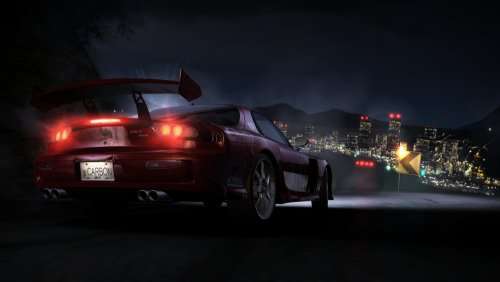 The biggest mode addition is Canyon. If you are up against a boss, you must do your best to race down this canyon with out trailing too far behind. If you do, you will lose. However, if you manage to pass the boss for over 10 seconds, you will automatically win that portion of the race. Points come into account here and are important. There is a total of five degrees of “closeness”, and the closer you are to the boss, the faster these points rise. If you fall far behind, they will halt completely.

These points prove important for the second portion of the race, which is virtually vice versa of the first. The Boss is chasing after you, as you speed down the canyon. However, the points you earned from the first race constantly plummets. The closer the boss is to you, the faster the decrease. So needless to say, if you did very sloppy in the first part of this race, you will not have an easy second part.

Racing aside, another thing Carbon brings to the table is Autosculpt. With it, you can tweak every aspect of your cars body to your hearts content. Each part of the car, whether it be spoiler or rims, will have various slider bars that control the sculpt. Adjusting these will affect the look a lot, while retaining the original idea. There are many, many different body parts available in the game and near all of them can be “sculpted”. 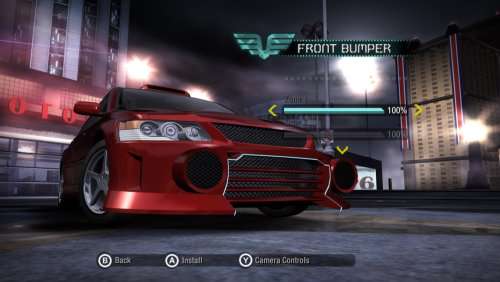 Along with autosculpt is the return of the usual styling features, such as decals and various paint. There is a lot of customization available should you want it. Personally, it doesn’t really matter to me because I only drive using the inside car view.