Tony Hawk and his crew are back in their eighth and largest installment yet. This time around there are many more goals to accomplish, properties to destroy and people to knock over.


Don’t get me wrong, I am a Tony Hawk Pro Skater fanboy, but something has got to be said about the sheer amount of bugs that seem to be packaged with each new version. Fans of the series know what I’m talking about. I understand that there are bugs in any game out there, it’s just a given. But in TH, they are just so blatant and unavoidable.

I’ll just touch up on a few here. The first bug I noticed was the fact that I could see character shadows through walls. For instance, someone is on a rooftop, and you are below them. You can see the shadow through the building no problem by looking up. Kind of takes away the challenge of finding people, a tad.

Numerous times throughout gameplay I would get caught inside the world, literally. Sometimes in a wall, and sometimes underground. There was even one point in the game where I glitched so badly, I kept being pulled across the area into the water. As I skated away, I would be pulled back. These glitches always worked themselves out, but were annoying.

So what else do we have. Oh yes, NPCs that have the ability to walk through anything. On many occasions I have seen people walk through gates, walls and even protrude their entire head through a cement wall. On one occasion a character fell and his head disappeared, but regrew once he stood back up. This game boasts the Havoc physics engine, but apparently it’s collision detection needs some serious work. 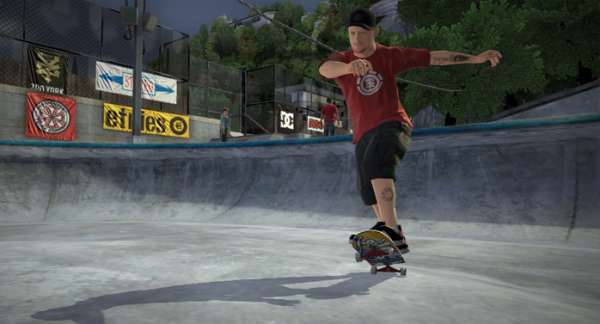 On two occasions while trying to play online, I joined a room that wound up being non-existent. At this point I would get an error telling me that fact, but the entire console froze. The only option was to turn it off and then back on.

The reason I “whine” about these bugs, is that they are in every single version… never to be fixed in the “next” version. This could be due to the fact that they are continually releasing the game each year and lack time to fix these minor bugs, I’m unsure. It’s just a thought that since these bugs are so incredibly obvious, that they’d have somewhat of a priority. I could be wrong.

Now that I have gotten all that trashing out of my system, let’s touch up on the game overall. I am a Tony Hawk Pro Skater fan like I mentioned, so it’s more difficult to dislike one of the released than it may be for regular players who have never played any version before. If you are a big THPS fan, you will love this game. There is a lot to do, and the difficulty is sky high, so it will keep you playing for quite some time if you want to 100% it. It’s a challenge, I am warning you. 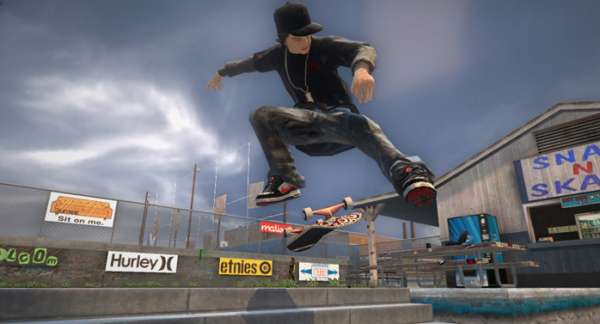 As it stands, I love the additions to the game, including the secret spots and varying difficulties for specific goals. As a whole though, the game didn’t sink me in like a few of the previous ones have. Most of the levels here are reminiscent of older games, such as the School and Skatepark. Though they are upgrades, they did not prove to be as fun.

I did enjoy the variety of the levels though, and how each interconnected with each other. It really was like being in a virtual world where you could go anywhere, especially when able to see another entire area while standing on top of a building. Most importantly though, a lot of the goals were fun. They are mainly rehashes of what we have seen in the other games, but the developers have worked hard to keep things fresh and interesting. I believe that they have done a great job.

In the end, this is not the best Tony Hawk game we’ve seen, but it’s definitely the most deep. Whether you are a Pro Skater fan or not, you will have a lot of fun with Project 8. I am awarding the game an 81%.

Pros
+ Tony Hawk action we’ve come to enjoy
+ Huge variety of goals to accomplish
+ Online play!
+ Lots of humorous video to watch
+ Easy for those who want it, incredibly difficult for those who want it
– Levels were not entirely creative
– Many glitches and bugs, though most don’t affect gameplay greatly
– Far better graphics than previous games, but not truly “next-gen”