The second board we are taking a look at is ECS’ X48T-A. This is the first ECS product to ever hit our labs, so I was looking forward to seeing just how it stacks up against the competition. ECS is no stranger to motherboard development, but as we all know, the enthusiast side of things is far different than anything else. Just like a performance car manufacturer, it’s hard to make a huge impact right away. 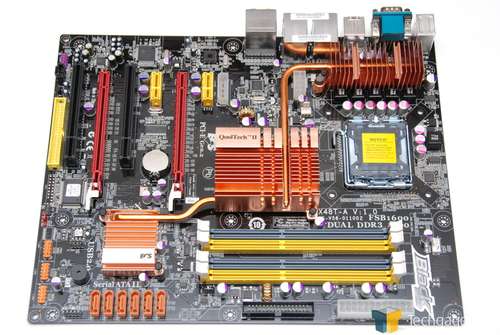 Well so far, so good. The color scheme is quite nice, but I personally tend to be drawn towards a darker color scheme. The passive-cooled design is also a nice touch, but expected. A few things strike me as odd, however, and we’ll cover them all throughout this page.

Most of the peripheral connectivity is located in the bottom right-hand corner, including S-ATA ports, three USB connections (for six ports total) and also the front panel headers. Those are located a little differently than on most of the other boards we’ve seen, as they are positioned vertically. You can also see the CLR_CMOS toggle to the left of the USB ports, which allows you to clear the CMOS if any instability occurs. 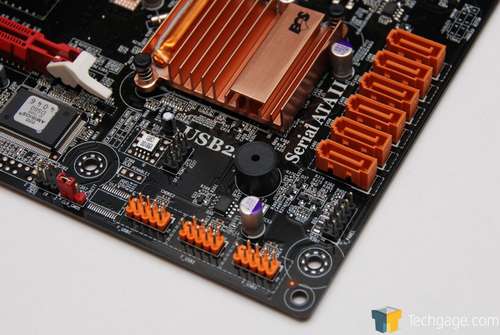 As previously mentioned, the ECS X48T-A features a passive-cooled design, with modest heatsinks on the Southbridge, northbridge and PWM. 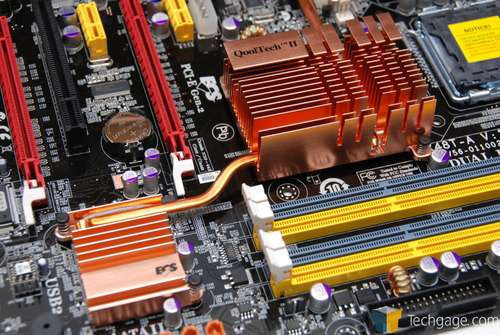 Similar to most other X48 boards, this one features support for DDR3. To the right is the lone IDE port and also the 24-port power connector. 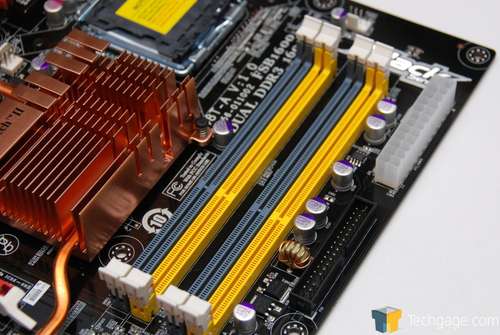 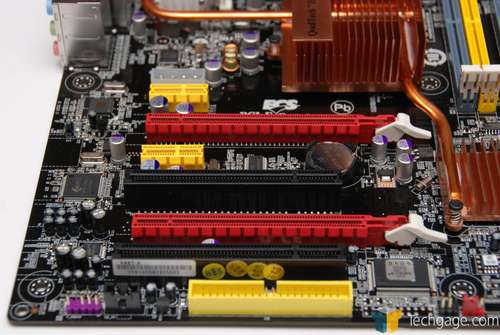 Moving upwards, we can see where the first real oddities come into play. Located here is both a 4-pin Molex power connector and also the 8-pin motherboard connector. Both of these are in an insanely inconvenient location, as it means you will need to run the cables across the inside of the chassis in order to reach. In my case (pun intended), I had to take the back door off of our Antec P182, just so I could rearrange the cables to get them to reach. 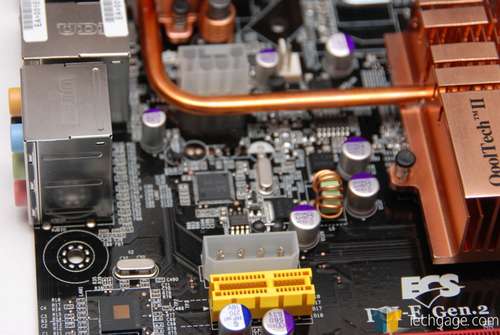 The 4-pin connector doesn’t need to be used, though, as its main purpose is to provide enhanced stability, only beneficial with overclocking. But as we’ll find out later, overclocking is not much fun on this board, so using this power connection will not be of a huge concern for many.

Moving along to the CPU socket, we can see a 6-phase power solution and a very clean surface area. This picture provides a view into yet another strange design feature. Note the 3-pin fan connector here. Get used to looking at it, because aside from the 4-pin CPU fan connector, it’s the only one on the board.

No, I’m not kidding. 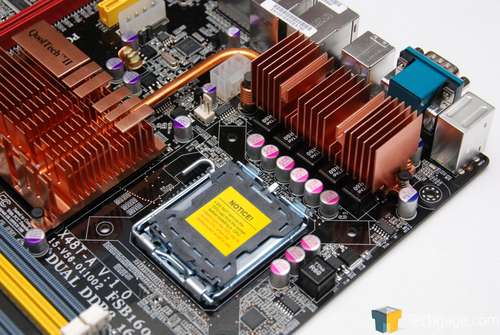 The back panel offers a lot more functionality than the board might immediately suggest. Here we have a healthy amount of USB ports, in addition to an e-SATA, dual NICs, S/PDIF audio along with regular audio ports, PS/2 keyboard and mouse and also a serial port. Wait, a serial port? Yes, a serial port. 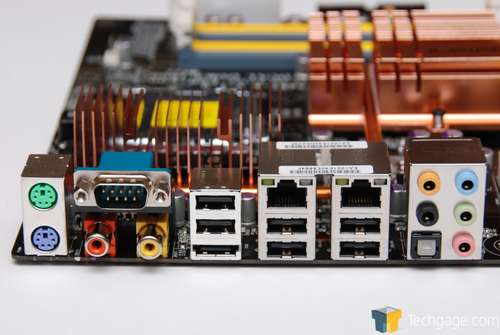 Accessories include an IDE cable, four S-ATA cables, internal S-ATA connector and also an I/O panel. The driver CD will not function in 64-bit Windows, so the drivers will need to be fished for manually through the various folders. 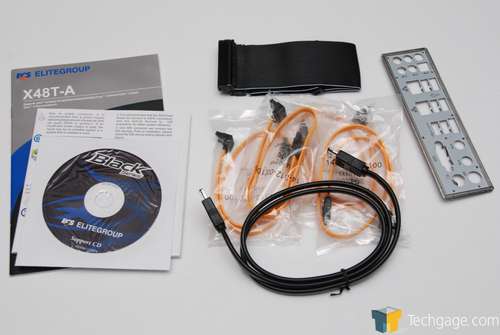 Overall, the X48T-A is far from the worst board I’ve touched, but it’s not the best, nor does it come close. Certain aspects of the board push me to the verge of frustration, because I cannot comprehend how ECS’ R&D department would purposely design the board with certain blatant drawbacks.

The largest issue, is the fact that the six S-ATA ports are positioned to be in the way of any installed graphics card of reasonable length. I installed an NVIDIA 9800 GTX and it covered four of the available ports. If you had two large ATI cards to use in Crossfire mode, you’d likely still have two ports available, but it would be cutting it close.

Then we have the single fan connector (ignoring the CPU fan), which is purely asinine for a ‘gamers’ motherboard. Do I even have to bring up the ridiculous placements of the 4-pin Molex (which isn’t even really needed) or the 8-pin motherboard connector? Whew. I really hope to see more common-sense designs from ECS on their enthusiast boards in the future.