by Rob Williams on December 28, 2005 in Peripherals

Have you ever wished that you could use your consoles controller on your PC? Usually, they are designed much better than anything PC makers can release so it seems to only make sense. Finally, Microsoft has stepped up to the plate and made their Xbox 360 controller available for Windows.

I’ve personally been looking for the perfect gamepad for the computer forever. I have many times gone to the store to check out gamepads, and been quite disappointed. I found that some peripheral makers are taking zero lessons from the ones who do it right, because they are the opposite of what a gamepad should look like. To date, the gamepad that I have been most impressed with is the Logitech RumblePad, which we reviewed back in March.

I was so impressed with that gamepad, that I immediately ordered a second one. Logitech obviously took lessons from Sony with the creation of that pad, because it looks identical to the PlayStation controller. It felt the same, had the same buttons and worked perfectly. However, I was really hoping to see a controller more like the Controller S for the original Xbox, and here we have something incredibly similar. 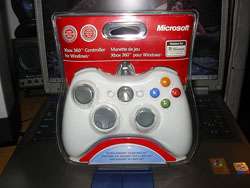 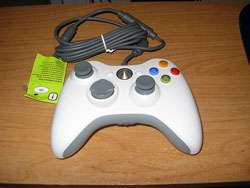 I personally enjoyed using the Xbox Controller S over the PlayStation controller because I found it to be more comfortable, and I liked the way that the buttons were laid out. The Xbox 360 controller has been upgraded though in a few areas. On the Controller S, we had Black and White buttons below the ABXY set, but those have now been moved to the top of the controller, similar to the R1 and R2 buttons on the PS controller. In addition, the Start/Back buttons have been moved to the middle of the controller, which is where they belong. 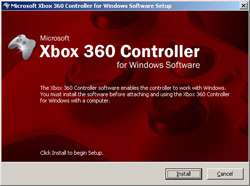 Back to the basics though. The controller fits in the hands quite well, it’s very comfortable. To me, it feels very similar to the Controller S, but is even more natural. It’s also extremely light, as opposed to the Wireless versions for the 360. The controller is great looking also, and looks identical to what you get on the actual console version. The absolutely only difference between the controller on on the PC and the 360, is that the Xbox Live button does not function when plugged into the computer, and you cannot use it as an extra button in your games. 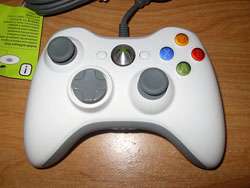 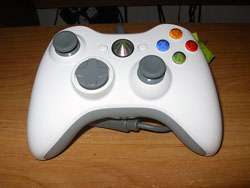 That brings me to the next point. If you already own a wired 360 controller, all you have to do is download the software from the MS website which will allow you to use it on your PC. You can grab that software right here.

The controller layout is like most others, with two analog sticks in addition to a D-Pad. You have the standard ABXY as well of course, plus the Back and Start buttons. The two triggers have stayed the same since the original Xbox, and are considered to be a “Z-Axis”. The reason that it is an Axis as opposed to regular buttons is because that it’s a way to detect sensitivity. The harder to push down, the faster you go in racing games, so it makes it more realistic.

This confused me at first because I wanted the left trigger to be for braking and the right for acceleration.. but how could I set that up? Well, some games allow you to configure Axis for more than one thing, so that’s what I had to do in NFS: Most Wanted. At idle, the Z-Axis stays in the middle, but by pushing the left trigger and will bring it to the bottom, while the right to the top. If you run into a game that doesn’t allow you to configure two actions on one Axis, it may be a problem.

Simply by looking at the pictures of the controller, it’s easy to tell that it’s a well built gamepad. It has all the buttons you need, and seems to work quite well. Sadly, there are a few nagging problems that should be remedied sooner than later. 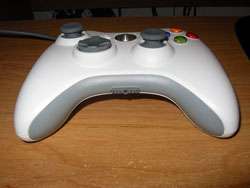 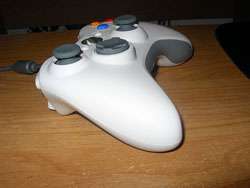 On the very top of the controller are the LB and RB buttons, and behind them are the triggers. One thing I noticed, especially when using the triggers and thumb sticks is that you can accidentally hit the LB and RB buttons by accident, because your fingers slide up and hit them. If those two buttons were placed slightly differently, this minor issue could be resolved.

Why not wireless? This is one thing that really confuses me, because the wireless controller for the 360 is one of my favorite features of the console. It would have taken little effort to create a USB dongle to allow the controller to be wireless. I know many people who would easily pay an extra $10 just to have the controller wireless, because face it… that’s where computing is going. It sucks to have to go plug in a controller especially if you want it plugged into the back of the computer.