by Rob Williams on December 28, 2005 in Peripherals

Have you ever wished that you could use your consoles controller on your PC? Usually, they are designed much better than anything PC makers can release so it seems to only make sense. Finally, Microsoft has stepped up to the plate and made their Xbox 360 controller available for Windows.


I tested the controller throughout a few games, but I pretty much already knew what type of performance I should be getting, since I can’t keep my butt off the actual 360 console. At any rate, Microsoft sent along a copy of Moto GP3 with the controller, so I tested that one out first. One thing I should mention, is that I could not get the vibration to work no matter what I did. However, I am going to blame this on my PC and not the controller, because I could not even get my Logitech Rumblepad to rumble anymore and it used to no problem. 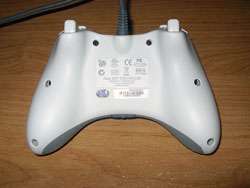 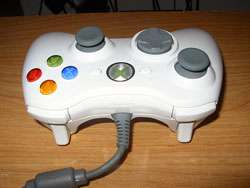 Also, for a game to be fully compatible with the 360 controller, it should state as such. Where it is supposed to state it, I have no idea but Moto GP doesn’t say it anywhere. I looked on the MS website and couldn’t find a list there either.

I admit, I completely suck at moterbike games… especially Moto GP. The controller performed quite well though even though the default configuration was a little odd. One thing that I did notice though, was flying down a straight-away, my bike would turn to the left ever so slightly. I went straight to the Windows joypad configuration and recalibrated it whiched seemed to have fixed the problem though. The controller worked great once that minor tweak was done and I had no issues at all.

The same goes for NFS: Underground 2. I completed that game on the computer with the Logitech Rumblepad 2, and I can say that I wish I had this 360 gamepad back in the day. Both controllers worked perfectly, so it comes down to which you prefer… the PlayStation or Xbox 360 controller. Again, the same for Fantastic Four; The gameplay was perfect and was exactly as I expected. I have no complaints at all about the gameplay in any game, but wished I could have gotten the rumble to work in these games, since they all did support them.

There is not too much bad that can be said about the controller. Since I have wanted an Xbox controller for the PC for quite a while now, I was very pleased when this one was announced. Since I also own a 360, It’s an even better value because I can use it for both platforms. I am still puzzled as to why the rumble feature of the gamepad would not work, but I will be doing some investigative work. As always, if someone out there has the gamepad and has their rumble feature work, please let me know!

There are three main things that hurt this controller. The first is that the top two buttons can get in the way when you use the triggers, depending on how you hold the controller. One experience on the console, was that while racing in PGR3, I would accidently hit it and it would change my view… in turn messing up my run. The second problem is that it is NOT WIRELESS. I can only ask why why why, because it’s wireless for the console. We have wireless mice and keyboards, so why not this gamepad?

The last problem is the lack of any software. You plug the controller and that’s it.. no real configuration is needed. An example is that Logitech includes a configuration and game profile program, which this controller should have. I hope to see this added in the future. Overall, I am giving the 360 Controller for Windows a respectable 7/10.