To find the max stable overclock on an NVIDIA card, we use the latest available version of RivaTuner, which allows us to reach heights that are no way stable – a good thing.

Overclocking can sometimes be a huge part of a graphics card review, but mostly if the card doesn’t happen to be pre-overclocked. In the case that it is, we always start out rather skeptical, especially with this particular card since XFX did a masterful job of applying a factory overclock that’s actually substantial… not a measly 15MHz boost like some other companies try to pull.

What was a little odd, though, was that we managed to go much higher than this, especially on the Core and Shader, but there were almost zero differences in the overall scores delivered. The main change was the temperature, so it made all the sense in the world to lower all clocks to a more modest level. If you have a superb after-market cooling system, you may be able to push the card higher than what we’ve achieved and see real benefits, but it’s not likely to happen using the stock cooler. 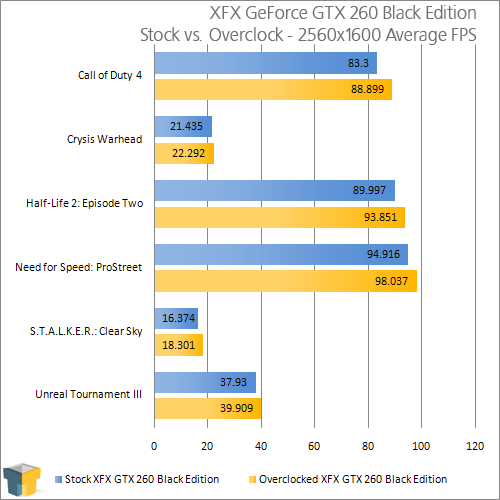 As we’d expect with such a nice boost in clocks, some real differences are seen, especially with CoD4 and NFS: ProStreet. I personally wouldn’t overclock for the sake of gaining an extra 4 FPS with a game that already scores well over 80 FPS, but if you would, then all the power to you. 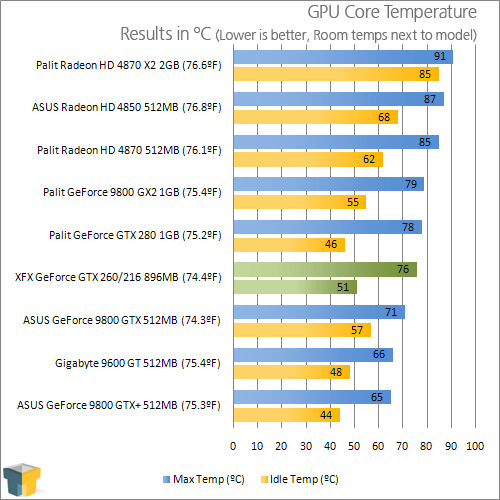 Compared directly to the GTX 280, XFX’s card ran a little warmer while sitting idle, but oddly enough, it proved 2°C cooler at full load. I was a little surprised at this, given the GTX 260/216 is running much higher clocks, but the proof is in the pudding.