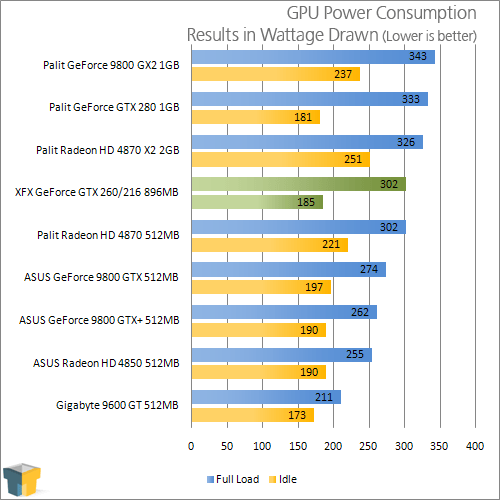 We saw very small improvements in XFX’s card over the stock GTX 280 in our temperature tests, but the differences in our power efficiency tests are far more stark. Despite the fact that XFX’s overclocked card runs pretty-well just as fast as a GTX 280, it used over 30W less at full load. Oddly enough, just like the temperature tests, the idle wattage was higher, by 4W.

As I touched on in the intro to this article, it’s been quite easy lately to be caught in a trance with regards to ATI’s product line-up. They released a few killer GPUs recently and effectively took everyone’s eyes off of NVIDIA for the time-being. But, it’s cards like the GTX 260/216 that prove that NVIDIA loves a good fight.

XFX did a great job of taking things to the next level, though. Although we haven’t taken a look at the stock-clocked GTX 260 in the past, I was well-aware of what to expect performance-wise, so when the delivery guy first chucked the Black Edition at my doorstep, I already had figures floating around in my head. That was until I noticed the huge factory overclock, which as seen in our tests, works wonders.

Our results prove one important factor. XFX’s card has such a nice overclock that it actually managed to negate the fact that the GTX 280 has additional stream processors. In some cases, the Black Edition even managed to exceed the performance of the GTX 280 – something I did not expect to see. 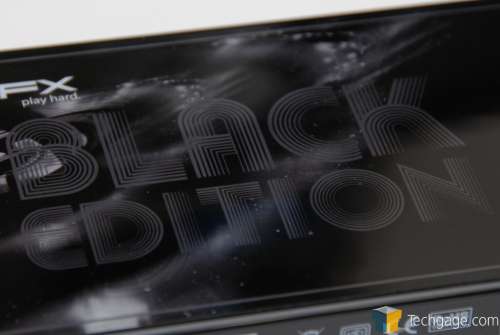 To gage the worth of XFX’s offering, a few factors have to be looked at. Where GTX 260’s are concerned, the original models can be found online for as low as $235 after a slew of rebates, which puts it on the same level as ATI’s HD 4870, which retails for around the same price. So is another $65 worth it for the 216 model?

As usual, that’s a question you yourself have to answer, but the answer is made much easier when taking a look at XFX’s Black Edition. This card is poised to launch very soon (should have been this week, but I haven’t see it online yet), for around $300 – the same as other 216 cards. But, the Black Edition includes two notable features: Far Cry 2 and an incredible factory overclock.

Where those factors are concerned, the Black Edition is well-priced. I checked out similar cards from other manufacturers, and none were directly comparable with this one. Some had high overclocks (the closest was 650MHz Core), but didn’t include a game. The ones that did include a game, had stock or very minor factory overclocks. So when taking everything into consideration, $300 – $310 for the Black Edition turns out to be a very reasonable price.

Bottom line? If you want to save some money but still want a fantastic gaming experience, pick up an original GTX 260 or HD 4870. If you want an enhanced experience that almost matches the performance of the GTX 280 and also have the benefit of a “free” game, the Black Edition is a no-brainer. This card impressed me for multiple reasons, and I have a hard time finding a single real downside, and for that, it earns our Editor’s Choice award.