Power supplies are getting bigger and more powerful each year, pumping more and more heat into PC cases. Today we take a look at an external solution that promises to lower in case temps and help your PC keep it’s cool.

Lets get down to the numbers, shall we?

To stress the system as hard as possible I fired up Diskeeper 10, 3D Mark ’03 and SuperPI 1.04 and ran all three concurrently, This gave the CPU 100% load, the GPU 100% load and did a good job of keeping the drive heads thrashing non-stop during the test run. 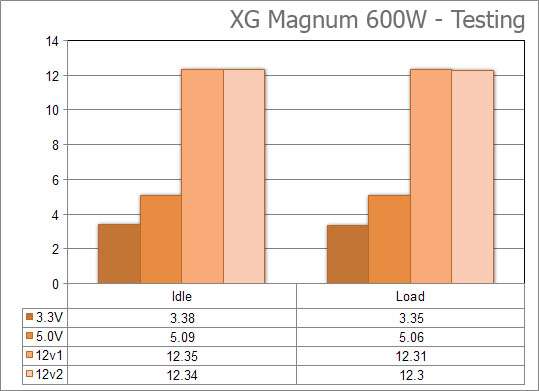 Oddly enough, during testing I very seldom saw the included wattage meter exceed 180W. The 12V meter never budged off of 12.33V either even when my multi-tester is showing 12.35V. One of these days I’m going to have to either fabricate or purchase a test bench that will allow me to set the amp draw on each rail so I can tell how accurate these wattage displays are. By rough estimation though I should be presenting a >200W load on the PSU. 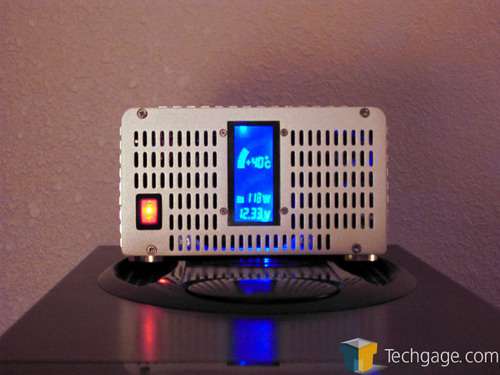 Time to sort through the nitty and get to the gritty…

When it’s all said and done would I recommend this PSU to my family and friends? The short answer is no, the long answer is it depends largely on what they’re trying to achieve. If they were building an HTPC and weren’t building it with a power hungry X2 and high-end SLI cards I’d say hell yes. The pumped up wattage claims prevent me from giving it the overall stamp of approval though. For a high-end system 500W is just not enough guts to keep everything running smoothly, 600W would be marginal but with the 28A 12V2 rail on the 600W unit it would be better suited for a pair of 7900GTX’s.

Now, we spoke about temp reductions earlier. I bet you thought I’d forgotten. Don’t worry, I may be old but I’m not doddering (Yet) and I will cover that now. Up to this point I’ve been running the Ultra X2 in my system and my average case temps have hovered around the 32C mark. With the Magnum EX the average case temps have dropped to 30C. I took the trusty RayTek Mini IR gun to the EX and shot the outside of it while I was running the load test and the outside was a steady 35C at the middle of the PSU. This is in a room with a 21C average temperature. So while not a 70% drop in temps inside the case it does help.

At the end of the day how does the Magnum EX rate you ask? I’m glad you asked. An ~$200 500W PSU passing itself off as a 600W PSU gets dinged a bit in my book, Since we don’t use .5 in our scale I’m giving the EX an 8 but in my heart it’s a 7.5. It’s a killer PSU, stout and stable as all get out but the over rating and the lack of at least 4 hardwired SATA connectors ultimately hurts it.

If you are interested in commenting on the review, you can head on into our thread. You do not need to register in order to reply to any of our content threads.