Not everyone wants to pay over $100 for a cool looking case. The Ninja 2 from XG packs a lot of features and functionality into its cool frame. Let’s take a look and see if this case is worth even the budget price point.

Nothing to mention on the opposite side of the case just a flat metal panel as it should be. One thing that should be mentioned about the side panels of this case is that they are pretty flimsy and will bend very easily. Flush mounting them back on the case once removed is very challenging. In order for me to properly re-install the panels I had to lay the case on its side and use my forearms and hands at the same time to press the panels into and hold to make sure it stayed in position until the thumb screws were in places. This is a bit inconvenient and could be solved by using another material or tougher construction for the side panels. 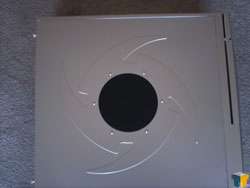 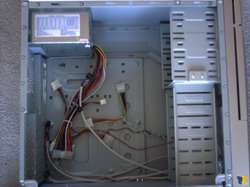 The front of the Ninja 2 case sports a gun-metal ninja star, a few blue LED’s (blue is the color for all of the case color choices) and several ventilation slash openings with a lighted fan behind them to draw cold air into the case. The door of the Ninja 2 has a very handy feature; it has an opening at the top 5.25â€ drive bay to allow you easy access to a CD/DVD drive. This design provides a lot of convenience for people who like to set their burners to burn a disc while they go about doing other chores. So when the disc is done burning, the drive can open without bashing into the case door. This design does have one flaw that kind of bugs me, the top drive bay is too far away from the motherboard for my IDE cable to reach it. I would have had to go purchase a new cable in order to use this feature. This case is in no way going to lose points for this, because I have short IDE cables.

The back panel of the Ninja 2 case is pretty much standard and an ample amount of expansion slots are provided for user convenience. There are only two issues I have with the back panel. The first is there is only one fan opening if this case is going to marketed to gamers this is not good. With the restrictive mesh on the side panel and only one fan opening in the back cooling may become an issue during extended gaming periods or overclocking. Another fan opening would help improve air flow and lessen the cooling issues with this case. The second gripe I had with this case was the plate to cover the motherboard ports (serial, parallel, USB, and audio connectors), the audio connector openings on the plate are arranged vertically and the connectors on my motherboard are horizontal, which equals it won’t fit, this is not the problem. 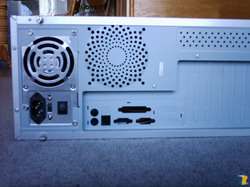 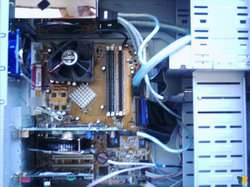 The problem comes when you try to remove the plate, it is held in there GOOD. I tried to remove the plate by hand almost bending other portions of the back panel, which is also not good. Finally I abandoned the feather touch approach in favor of a more aggressive and technological strategy. I grabbed my trusty rotary tool and high speed cutter bit and cut the welds that were holding the panel in place. This panel should not have to be removed with such force because every motherboard can differ in design and layout. Either bend other areas of the case or get the power tools, your choice.

Installing the components in the Ninja 2 was as simple as it could get. There were no issues in the install, once the back panel issue had been resolved. All the drives fit into their places and there were no issues with fittings (door not closing after drives in place, etc.). The wiring and cables provided in the case are clearly marked for easy installation of any computer setup. There is also plenty of space in the case to move and hide excess wires out of the way, not only to provide less restricted airflow but also to provide that clean well organized look (in case you happen to go buy a clear panel for your Ninja 2). This case also provides the user with a removable mother board tray for even easier installation. The power supply included with the Ninja 2 is a 400 Watt generic model and helps make this case an even better deal. For a case that looks good and won’t break your budget, with a price tag of $49.00, you can’t beat it.