XTorrent is a BitTorrent OS X application that is being hailed by many as the most capable program of itâ€™s kind and one that blows past everything that came before it, regardless of platform, price or functionality. But is it really that good? We at Techgage took a look at the latest version to let you know.

Today Techgage reviews Xtorrent, the highly anticipated BitTorrent program for Mac OS X. It is written by David Watanabe, the author of several high quality OS X programs such as the critically acclaimed Acquisition, NetWire RSS and Inquisitor for Safari.

According to the Xtorrent site you can:

Xtorrent is all about search. Type keywords in and the results show up right in Xtorrent. One click later and you’re downloading your content. It’s ridiculously easy… and it’s only in Xtorrent.

Get Exactly What You Want

You can browse the files and folders of a torrent before downloading and see its real-time swarm status. Easily narrow your search results using the straightforward media type and keyword filters.

Xtorrent consolidates the work of many apps into one. Ditch your RSS reader and your web browser… Xtorrent lets you subscribe to RSS torrentcasts directly. Just like the search interface, you’re only one click away from downloading the latest content.

Xtorrent has the svelte body of a supermodel and the brute strength of an iron man. In true Mac form, it successfully marries a high-performance and advanced download core with a truly easy to use interface. Mac users deserve nothing less.

As many already know, torrent apps, despite their popularity, have pretty much remained a little too hard for the average person to use, because it forces them to wade through torrent trackers, find their file, make sure it has enough seeders, and then lastly open the torrent downloaded file in their torrent application to enable the download. Hardly fun or exciting sounding is it? 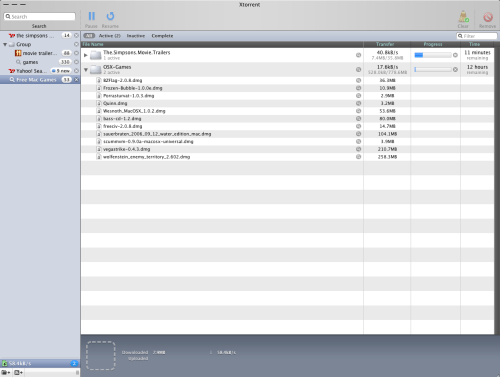 However, XTorrent was designed to fix a lot of these problems, once and for all, which is why so many love this program despite it being such an early release. In fact, many people will swear that Xtorrent is absolutely the best, by far, of any such software on the market today regardless of platform, be it Windows, Mac or Linux. But is it true, does it deserve such accolades? Well, lets check Xtorrent out for ourselves and find out.

To start, I will begin with what I really like about XTorrent.

Also, what I really like, no… really love about Xtorrent is the stunning ‘iTune’ like interface, which is also heavily used in its sister app Acquisition, a P2P that I have enjoyed for many years. A Windows friend of mine, several years ago, tried this program out on my Mac and fell in love with it immediately. After trying in vain to download it for Windows, I had to break it to him that it was a Mac specific program, a fact that disappointed him greatly. Since this is a great program, I was eager to see how XTorrent compared with it, and, for the most, I think it compares very nicely. 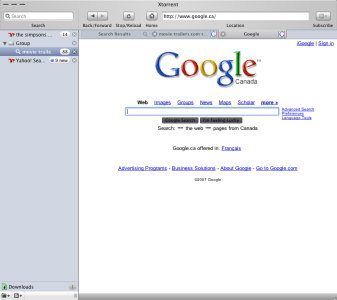 Other things that I loved about XTorrent, like SvenOnTech, whom are just some of those folks that just happens to think that Xtorrent is easily the best of its kind, bar none, was that they, like myself, loved the fact that by simply “Clicking on one of the downloads it would give you detailed information such as the tracker URI, amount of seeds and leaches, as well as a graphical display of a box complete with multi-colors that indicated either the downloaded, uploaded, or remaining bits.”

Plus again, like myself, they loved that you could limit the bandwidth speed for an individual torrent and that you could either click on the download or upload meter and make changes via the drop down. Also nice was that you could also predetermine where each type of downloaded file goes, via the preferences. For example: AVI, QT, and MPG files automatically downloading to your Movies folder and, or, that your MP3 downloads would automatically go into your Music folder, and that images would go to the Pictures folder, or which ever folder you choose, etc. All very conveniently and nicely done, I might add.

SvenOnTech also reported that, “Download speeds seem to be as fast, if not faster, than other clients we’ve used on both PC and Macs.” They also stated that “…. we performed a download of Lost Episode 17 from this season in about 2 hours while CHiPs and a Lost spoiler were also downloading. Not bad for 700 MB XvID file.” 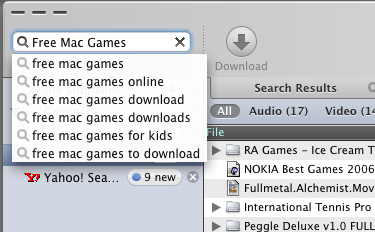 I also agree that I really love Xtorrent’s built-in search feature. It’s excellent and, as SvenOnTech states, “the best we’ve seen thus far.” I too love the way Xtorrent rates your downloads with stars, with the higher the star indicating the higher or better download rates that you will get.