The previous cooler I had installed on my board was Corsair’s N500 water cooling, so I first uninstalled it. In order to fully remove the clips from that cooling, I had to pull out the motherboard to get in behind. Though this was a pain, I was required to haul out the motherboard in order to install a bracket for the 9500AT anyway, so it wasn’t a big deal. 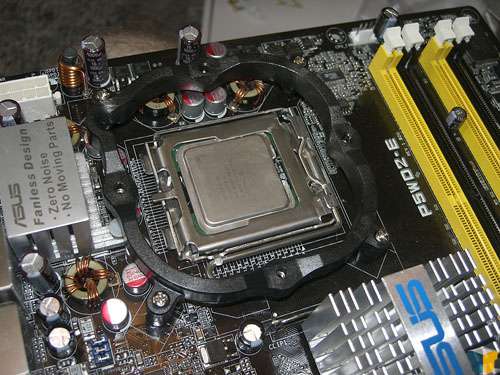 Once the N500 was completely uninstalled, I cleaned the CPU so it was completely clear of any thermal paste. With the motherboard in hand, I had to install the bracket to the backside of the board. 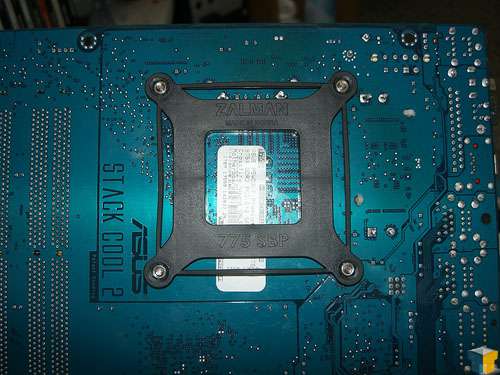 Turning the board back over, I took the front part of the bracket and screwed everything into place. Though I didn’t run into a problem here, I could have. You -must- install your CPU prior to installing the bracket. The 775 metal cpu bracket is unable to fit past the Zalman bracket once installed. This means, in order to take out your CPU for a cleaning after installation, you will -have- to remove the bracket first. This is a large pain, due to the fact that you will need to remove your motherboard in order to do so. 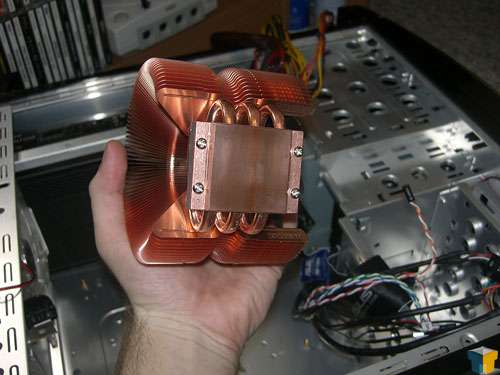 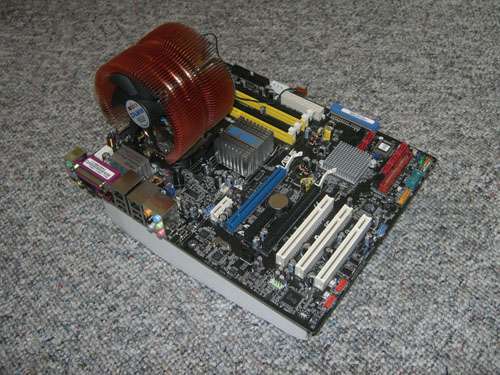 The next step was to place the 9500AT onto the CPU, and then put a small two-way bracket through the bottom of the cooler. There is a stub on the aluminum part of the cooler, which allows this bracket to stay in place. The very last step was screwing in one end, and then the other. Finito!

Overall, the installation went quite well, but there are a few things I wish were different. First off, having to take out your motherboard in order to remove your CPU is kind of ridiculous. This means, that anytime you want to try a new thermal paste/grease, you will need to haul out the entire board and unscrew the bracket in order to remove the CPU. The bracket should have been made a tad wider in a specific area so that CPU removal would have been easier.

The second complaint would have to be that better thermal paste should have been included. Actually, I didn’t get to -try- the grease because it would not come out of the tube. I would have preferred thermal paste in the same style tube that AS5 uses, or even a packet. I am unsure why none of this grease would come out for me, but luckily I had AS5 on hand. Some people may not.

The last thing that struck me as odd was the fact that there was no plastic protective film over the copper base of the cooler. As soon as you take it out of the package, it’s exposed so you must try to not smudge it all up. I did smudge it all up, because I was unaware that there was no film to tear off. Not such a large complaint, but some time of protective covering is usually expected nowadays.