I no longer have the stock cooler that came with my 820 D, due to it being an absolute pain to re-install, so I will be comparing the 9500AT to the Corsair N500 Water Cooling. Granted, this is not -that- fair of a comparison, but it will be interesting to see how well Zalman’s air solution compares to the the water cooling.

I tested the cooler using my CPU at 2.8GHz, 3.36GHz and 3.92GHz. At each setting, a loop of 2 3D Mark ’01 runs were executed. Following that test, 3D Mark ’06 was also looped twice. Lastly, Super Pi 1.5 Mod was run, using the 8 Million setting. All figures were grabbed with Everest 2.8, which does a great job of logging temps to an easy to read HTML file.

The directed way to use the Zalman, as told by Zalman, is to have the 9500AT facing in such a way that will blow hot air to the -back- of your PC. Presumably, you should have a 120mm case fan installed in the back that’s used to export hot air. This way, the Zalman will blow air towards it, and the fan will get rid of it quickly. I tested the cooler both ways, and the ‘opposite’ tag denotes the ‘incorrect’ placement. I did it both ways primarily to see how large the differences would be. 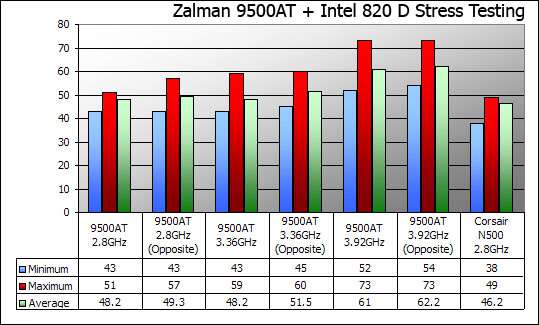 Sadly, I had forgotten to test the Nautilus at higher CPU clocks prior to un-installing it, which is why only the 2.8GHz figure is displayed. Comparing 2.8GHz between the two though, the 9500AT came -very- close to the same average. Not bad for comparing an air cooler to a water cooling rig though. But, to be fair, when the Nautilus was installed, the airflow was not great. I made sure the airflow was superb inside the case prior to installing the 9500AT. Because of the cooler being so huge, I did not want a bunch of cords to get intertwined with it’s fins.

At higher overclock’s though, the temps were getting very high. Especially for 3.92GHz… 73°C is not exactly in the comfort zone. The max temp I have seen with the Nautilus has been 60°, but it would be even lower if the ambient room temp wasn’t so high.

For those interested, here are the motherboard temps during testing: 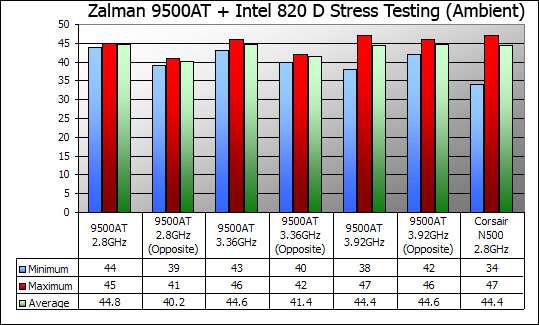