Compared to the GeForce GTX 480 that prefaced it, the GTX 580 became a card that proved NVIDIA’s determination to make sure its cards don’t overheat. While it took no effort to see the GTX 480 reach 95°C or higher, the GTX 580’s improved power architecture made sure it never got much higher than 80°C. A major improvement if there ever was one.

But while manageable, 80°C temps might not be ideal for those who have their PC in a room that’s notoriously warm (*raises hand*), are using a small chassis, or can’t stand the noticeable whine that can emit from a card like the GTX 580 during a gaming session. Again, where noise is concerned, NVIDIA improved the GTX 580 over the 480 quite a bit, but at full load, you’ll easily hear it above every other component inside your PC.

Somewhat surprisingly, there isn’t a huge market for GPU coolers, and at one popular e-tailer, there’s a mere 50 available (compared to the 200 or so CPU coolers), and of those, 15 belong to Zalman. It’s clear that the company takes GPU cooling seriously, so we look forward to seeing what the VF3000F is capable of.

Before diving in, I should mention that I took a look at a near-identical Zalman GPU cooler last fall. Dubbed the VF3000N, that cooler worked with older GeForce models, and required a lot more effort to install. There, the cooling performance was quite good, but as the GTX 580 could be even harder to cool, the results should be interesting.

The most important thing to mention about the VF3000F will also be the first: triple slot. For those with smaller motherboards or lots of PCI/PCIe peripherals, a cooler of this form-factor is not going to be ideal for most. With my particular motherboard, I still managed to have a PCIe NIC and audio card installed and still have one slot free, but not all motherboards are going to be quite as forgiving, so please do your research before committing to a cooler of this size. 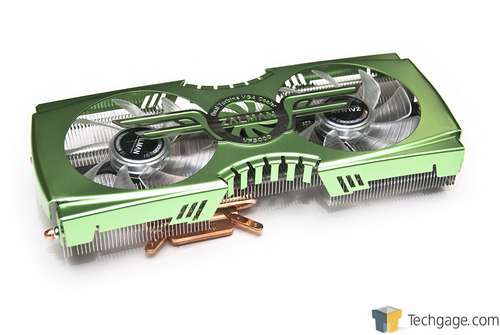 The first thing that may catch your eye with this cooler is its color, which while green, doesn’t quite align itself to the NVIDIA green that it could be trying to mock. Most people I’ve spoken with don’t like this shade, but I don’t have much of a problem with it – though I would have preferred something even darker.

Nonetheless, the cooler features a multitude of fins along with five long copper heatpipes and an ultra-smooth base – one of the smoothest I’ve seen on a cooler in some time. 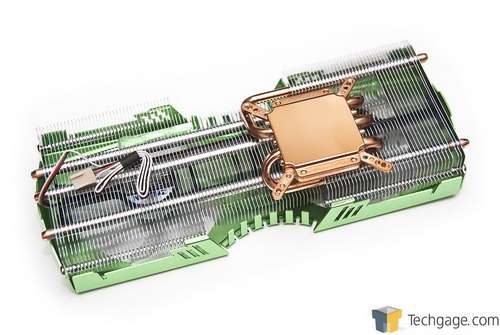 While taking photos of the cooler, I somehow forgot to take a photo of it without its shroud, but from what I can see, it’s identical to the one found with the VF3000N, so this photo should suffice. Here’s a close-up of the base, however, which I managed to smudge just a little bit before taking the photo (it’s harder than you’d imagine to avoid this!): 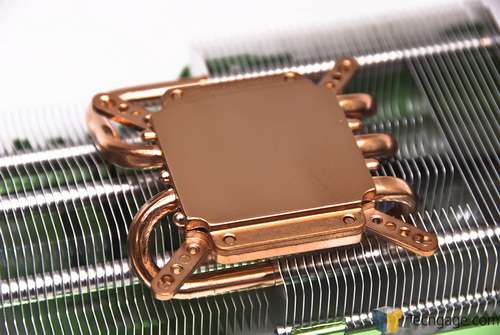 Compared to the VF3000N, the number of install components found with this cooler is minimal. With that cooler, each memory chip needed its own small heatsink, while here, Zalman has included a large block that makes things so much easier. Don’t believe me? Take a look at this photo of the VF3000N’s components and you will. 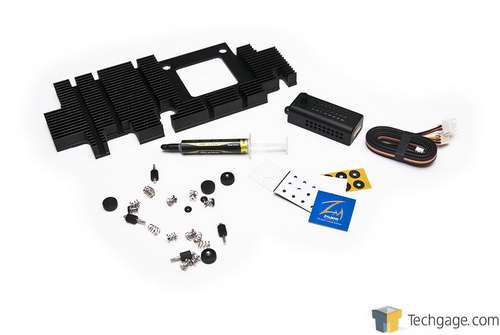 The goal of most coolers is to deliver as good performance as possible while retaining reasonable audio levels, and the VF3000F is no different. With its dual-92mm fans, huge number of fins, thick heatpipes and super-smooth base, this cooler could well prove to be an excellent performer – and we’d hope so given its $75 USD price tag.

With that said, let’s move onto the installation and testing.