To test the difference between the reference cooler (pictured in this article) and Zalman’s VF3000F, I used a combination of GPU-Z 0.5.4 to record all of the temperatures, and Futuremark’s 3DMark 11 at Extreme mode in a loop of 3 to push the card about as hard as it can be.

Coolers of any sort can be a little sporadic with their effectiveness from one run to another, mostly depending on room temperature, so for the sake of added confidence in our results, each test was run a total of three times. Due to the equally sporadic nature of my city’s weather, testing took about a week to complete as it was a rare occurrence when my non-temperature-controlled room became cool enough for testing.

First up is a graph containing the best results across the three runs for each configuration. Following that is a break-down of each run to give ourselves a clearer picture of what the VF3000F is capable of. 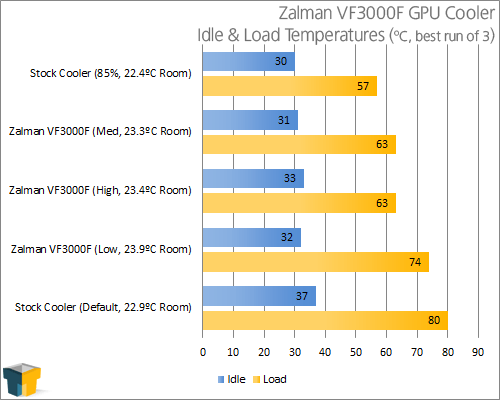 Using the VF3000F’s lowest fan setting, which is just about inaudible, it outperforms the stock cooler by a fair margin. It knocked 5°C off both the idle and load, which is more impressive than it seems by numbers alone. The reference cooler’s noise at its default setting is very noticeable during a gaming session if headphones or loud speaker volume levels are not being used. The VF3000F on the other hand is easily overshadowed by every other component in the PC.

At about the 30% mark on Zalman’s fan controller module, the fans begin to become audible. At about 50%, the height of the audio is reached, and judging by our Medium and High results, it’s clear that the fans operate at the same speed when the dial is settled anywhere between 50~100%.

Let’s wrap things up on the next page.