by Rob Williams on September 6, 2010 in Cooling

The summer might be about over, but the need to keep our graphics cards cool is one that never goes away. To help make sure that our GTX 200 cards are running at their best, Zalman has released the VF3000N cooler. It offers an abundance of fins and copper, a lot of room for airflow, and a surprisingly easy installation process.

Zalman’s VF3000N is quite a nice cooler for GTX 200 cards, and for its ~$59.99 price tag, it looks to be well worth a consideration. But, there are some things to consider before leaping at that purchase. The first might be the question of whether $60 is worth the 26°C temperature drop that we saw. Answers to that will surely differ from person to person.

The VF3000N is great from an aesthetics perspective. As a whole, the design is rather simple, but it looks good with a sharp-looking shroud and blue LED fans (if you like that sort of thing).

From the noise perspective, the VF3000N is excellent. At a low fan level, the card is almost not even there… easily overshadowed by other components in your PC. At high, it’s clearly noticeable, but at that point, it can be assumed that you are gaming. And if that’s the case, the noise isn’t likely to be noticed due to speakers or headphones being used.

Despite the number of components that comprise this cooler, it was surprisingly easy to install. Certain parts were tedious, especially the memory chip heatsinks, but tedious doesn’t always equate with difficult. There were simply 16 of them to apply, and you must be careful when setting them on a chip if you want to have a clean look. 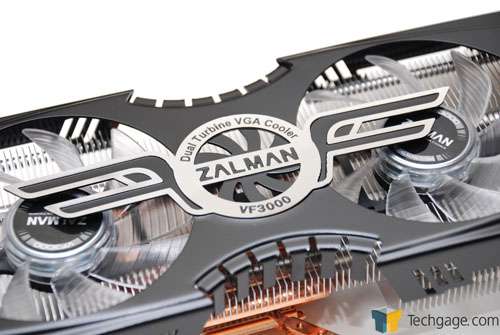 For the bad, the first and most notable problem with the VF3000N is with the fans. In order to have them function, you must use the included fan controller, which as a whole isn’t large, but it still makes for a clunky setup. The cable for said fan controller is long, so it makes keeping a clean interior a bit of a chore.

Then there’s simply the fact that in order to lower or heighten the speed of the fans, you must use this controller, and in order for that, you’ll need to run it through to the exterior of your chassis. In my case, I ran it through one of the water-cooling holes since they are unused.

Ideally, the card should have mechanisms in place to control the fans on its own, like reference cards do. The upside is that this at least does give the user some control, and the ability to use low fan speeds even while gaming it up.

Another large concern is the fact that the VF3000N doesn’t take up just two slot spots, but three. While it’s easy to understand that Zalman was striving for the ultimate in cooling ability, given that the three were taken up, I was hoping to see performance a bit better than what I did.

In fact, I was a bit surprised that the temperature differences weren’t a bit greater, especially with the fan on low speed, given that there is so much extra airflow and a more efficient design at hand.

These are the only real complaints I have with the cooler though, so if you don’t care about using up three of your slots and the manual fan control, the cooler proves to be quite an interesting and effective one. The price isn’t outrageous either, so if you’re looking for a fairly clean solution to lower your card temps by up to 25°C, the VF3000N is worth a look.