Zalman is not normally known for their cases, but they are looking to please gamers everywhere with their Z-Machine GT1000. With it’s black aluminum frame, the case is built like a tank. But is it worth your $400?


In this review, we have looked at the exterior of the GT1000 as well as the interior. We have teased Zalman for the ridiculous amount of logos on the Fatal1ty version of this case and pointed out the only significant flaw of the case, its lack of a power supply support. Negatives aside, the Zalman GT1000 can easily be summed up in one wordâ€¦ awesome.

From the second to none build quality to the better than average cooling, the Zalman GT1000 is easily the best case that I have personally dealt with. The most critical complain that we have at this point is an obvious one. The case costs almost $400 and I personally have a hard time recommended any case that costs this much. However, with that said, I can see why this case costs as much as it does. The GT1000 is hands down the most solid case we have ever worked with and while this certainly adds to the overall weight of the case, rest easy knowing that it’s built like a tank and should last as long as you’re still using an ATX based motherboard.

The ability to remove virtually any piece of the case by either sliding it out or removing the allen bolts is a significant boost for Zalman in our eyes as well.

The noise that the GT1000 produced was audible, but nothing that would take attention away from your favorite game. While not the silent offering that Zalman has become known for, the Zalman GT1000 chassis isn’t going to distract you from doing what you do best, game.

Basically, what we are saying that we love the case. Yeah, it’s safe to say that. However, for a case like this, of this quality, you’re going to have to pay a pretty penny to have one. With all these positives, we really only have one complaintâ€¦ its price. At its asking price, we are venturing into the realm of a high end graphics card or even a quad core CPU and some change. This isn’t to say that the Zalman isn’t worth this much, but rather, it’s difficult to recommend this to anyone other than the hardest of hard core gamers.

Zalman has simply out done themselves with this chassis and for those fortunate enough to own one, there really isn’t a single feature that will disappoint. From the convenient hard drive bays to the ease and simplicity of the twin side doors, the Zalman GT1000 offers more than enough to system builders and gamers alike to almost be worth the steep price most online retailers are asking. The Fatal1ty version of the case can be found online for around $350 so we are hoping that with time, the GT1000 will venture down to this price point as well. 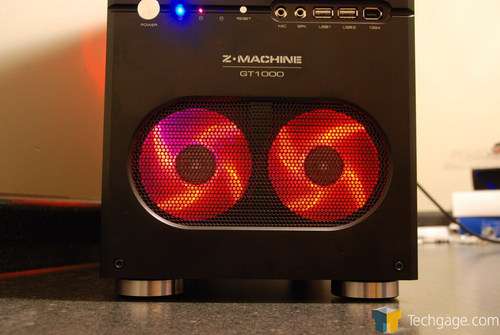 With all this taken into consideration, the Zalman Z-Machine GT1000 earns an 8 out of 10. With a slightly lower price, say into the mid to lower $300s, that score could easily go up to a 9 but as it stands now, $400 is a lot of money regardless of how you look at it and unless you have everything that you need to run your games at an ideal level, an investment into another video card or CPU might be a more rational decision when we are talking about this much money. That said, if you’re looking for the absolute best case on the market, the Zalman GT1000 fits that bill in my opinion.

For its style and quality of build, the Zalman Z-Machine GT1000 earns an editor’s choice award as well.