It’s been a good two-and-a-half years since we’ve taken a look at a Zalman chassis, so with the announcement of the ~$69 Z9 Plus, we were eager to get one in and see how it compared to the current fleet of sub-$100 offerings on the market. With that, let’s see what the Z9 Plus gives us aside from its good looks and focus on efficient airflow.

I’m starting to think that I have an incurable disease. It hasn’t made it into any medical journals just yet, but it’s very real. I call it COD; case obsession disorder. I just cannot get enough of cases. Mini-tower, mid-tower, black, white, standard layout, custom layout… I like them all – provided they are functional and as quiet as possible.

My latest guilty pleasure that I hope will scratch the itch is the Z9 Plus mid-tower case from Zalman. The company has long said that it specializes in quiet computing so if the features are there, this could prove to be a winner.

A quick look at this case and it’s clear that it takes some styling cues from the Zalman name. The front panel has a Z-design towards the bottom that covers part of where the 120mm blue LED intake fan is found. Rather than just covering up part of the fan and impeding air flow, the areas that overlap are vented, as is the area that runs along the bottom. 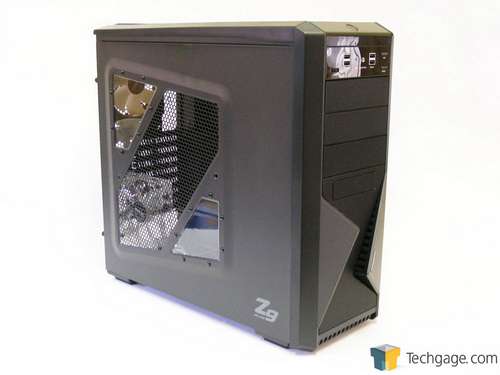 Those who just cannot let go of old technology will be happy to know that there is also room for a floppy drive between the fan and the three mesh covered 5.25″ drive bays. Installed in the floppy drive bay from the factory is a 5.25″ to 3.5″ converter used to secure the drive. 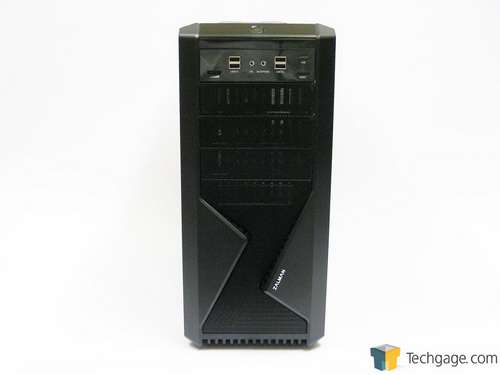 Zalman has decided to cap off the front panel with a few extra bells and whistles. On the left is a digital read out connected to a thermal probe that can be placed anywhere inside the case to give users an idea of where temperatures stand. Just below that is a two channel, one dial fan controller to keep a couple of fans as quiet as possible or to ramp them up when needed.

To the right is the first set of USB 2.0 ports with another set on the other side of the 3.5mm headphone and microphone jacks that support HD audio or AC ’97. Having the USB ports separated like this will allow larger, thicker flash drives to be used at the same time as other USB devices instead of blocking off ports. On the right are the hard drive activity LED and reset button with the power button up above in the center. 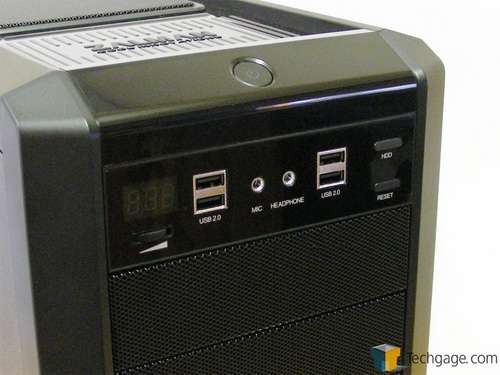 Removing the front panel is as easy as pulling out on the bottom and again on the sides near the top. My last few cases had front panels that came off cleanly, leaving all wires, switches and connections on the frame, so when I removed the front of the Z9 Plus, I was a little let down until I looked closer.

In the top right corner are two small clips that can be disconnected so the panel can be completely removed. To make reconnecting fool-proof, Zalman has made the connections different so only the correct wires can be paired up. Each of the 5.25″ drive bay covers features a removable dust filter as you can also see. 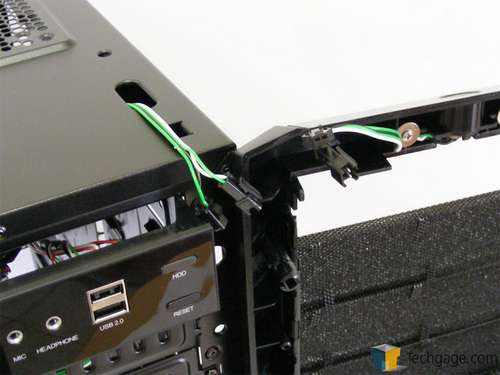 With the front panel out of the way, the break away, yet reusable 5.25″ metal drive covers are also visible as is the removable dust filter on intake fan. 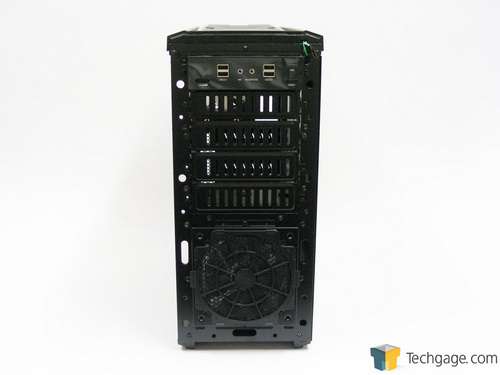 Swinging the case counter-clockwise gives us a look at the left panel, which is held on by two black thumb screws. Again, here is an obvious homage to the Zalman name courtesy of another Z pattern. The panel features two small windows in opposite corners and a large diagonal mesh area with another 120mm LED fan in the lower left. A second fan can be added to the upper right area of the left panel for additional cooling but even without one, this open area should allow more than enough fresh air into the case to keep temperatures down. 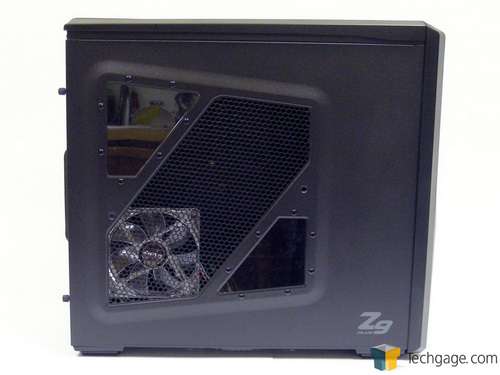 Around the back from top to bottom is the motherboard I/O opening with a 120mm non-LED fan next to it to exhaust warm air. Just below the fan are two holes with pre-installed rubber grommets for those who wish to setup external water cooling. Moving down the case are 7 break away vented PCI covers, a small mesh opening to the right and the opening for the power supply at the bottom, which is now the norm for gamer and enthusiast cases. 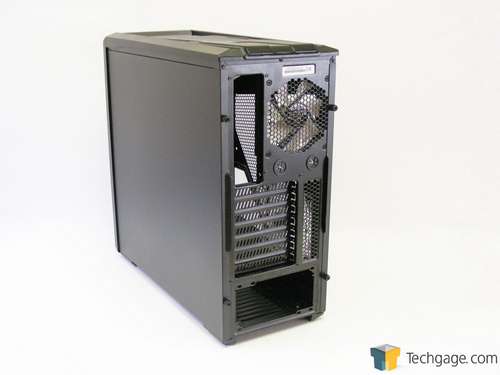 Seeing how the right side panel is solid with no features such as vents to add extra room for hiding cables behind the motherboard tray, I’ll move on to the top. Toward the front is a handy little tray at with the Zalman name at the bottom. This should come in handy for those who may have devices they routinely leave resting on top of the case such as a MP3 player, digital camera or cell phone. Directly behind the tray is the mesh cover that hides the 3rd pre-installed 120mm LED fan and space for another to be supplied by the user. 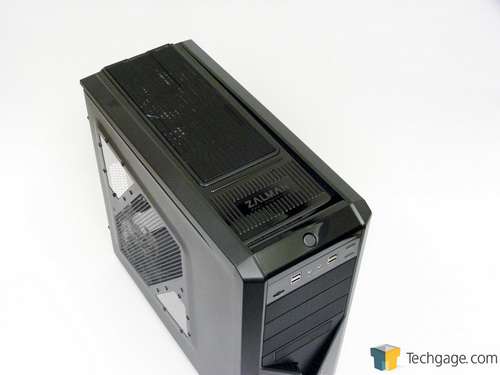 The bottom of the case features four rectangular rubber feet to lift the case off the ground and prevent slipping. There is also a removable filter for a final 120mm bottom mounted fan and openings for the bottom-mounted power supply to pull in cool air. 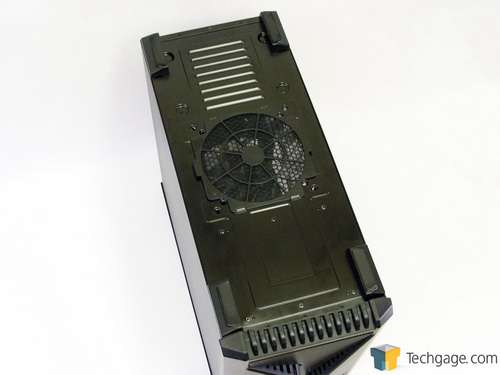 Next, a look at the Z9 Plus’ internals!